All taped up
Life
Arts & Entertainment

At first glance, Dutch artist Max Zorn seems to be just another tourist, casually exploring the streets of downtown Bangkok. But once he puts on his cap and sunglasses, a roll of brown packing tape around his left wrist and a scalpel grasped firmly in his right hand, he is ready to create an intriguing form of art. 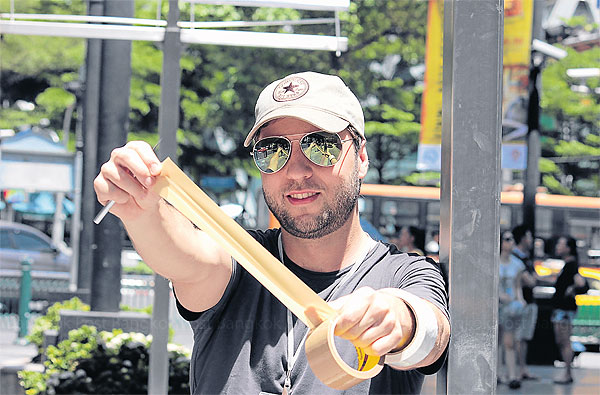 Max Zorn’s art has three ingredients — the man, the tape and the scalpel.

Tape art — a branch of street art that takes after graffiti culture — can be traced back to the United States in the late 1980s. From then, it gradually spread around the globe, with each artist developing his or her own style.

The process behind Zorn’s art involves meticulously sticking pieces of brown tape onto acrylic glass, then cutting them with a scalpel. The glass must be lit from behind for the art to be seen, an idea which stemmed from his interest in the way cities looked at night.

“There are things coming out that you don’t see so much. Your focus goes on different things and I think lights are one of the things you see. They’re like little theatre stages.” Zorn’s first piece of art was created on a street lamp, a spot nobody really expects to see art.

“It was a coincidence,” he said. “I was walking around in Amsterdam. They have these beautiful older street lamps and they look like a natural gallery to me. I thought to myself that, at night, it is a bummer you don’t see art in cities at all because it disappears in the darkness.” 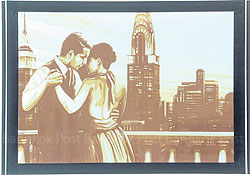 Tango, one of Max Zorn’s most recent tape art creations.

Zorn never attended art school, but this poses him no problems. His art is created through trial and error, his passion resulting in an iconic style, cinematic and spectacular, that has become his signature. To him, however, it is not only visuals that matter. The story his art tells is a major factor in crafting his work into
a cohesive whole.

In Tango, one of Zorn’s latest creations, a couple is seen in an intimate embrace.
It seems as if they are in the middle of a silent, secretive conversation. It’s a story inspired by a dance Zorn witnessed at an Argentinian tango event. He wanted to capture that moment, he said.

“I was never a big fan of dancing or anything, but I found myself sitting there and it was just really fascinating to see something going on between the man and the woman which was not expressed with words, but just with a touch or a feel.”

Zorn prefers a community approach to art, which was why he founded Stick Together, a project committed to spreading street art around the globe.

He gives out handmade stickers for free on the condition that they are placed in public places and streets.

“There is a process of creation which is not really shared very often. Artists usually just present the result of their work, and I can totally understand that,” he said.

“ It is a private process, but I always like to have people included in it. Like some people would come up and help me tape a little piece here and there, just get involved with it and diminish the bridge between the audience and the artist.

“Then art will be more embracing to everybody and people will understand much more that it is quite easy to do. It is not about ‘I want to be the best’. It is about sharing something that comes from inside. It is not a competition or anything like that. I just like that about art.” So far, thousands of applications have come in from all over the world and Zorn has sent out almost 200 stickers so far, some to locations as remote as Alaska and Easter Island — even a tiny Thai island. This is all thanks to his invisible network of helpers.

“It is a beautiful way to spread art,” he said. “I just want to give a little spark — to spark something in people’s minds. It comes basically from a little idea and then it develops.” Zorn said he is already preparing a sticker to leave behind in Bangkok, though he is still unsure of where to put it.

“I just want to find somewhere that fits where the context is right and where I feel that I would love to leave something, where I feel that people would enjoy it and not be offended by it. I hope I find that spot.”

- Max Zorn’s art is on display on light boxes on the ground floor of Gaysorn Plaza until Saturday. The exhibition is organised as a part of the Living Arts Festival 2014 @ Ratchaprasong.
- Visit www.thelivingartsfest.com. 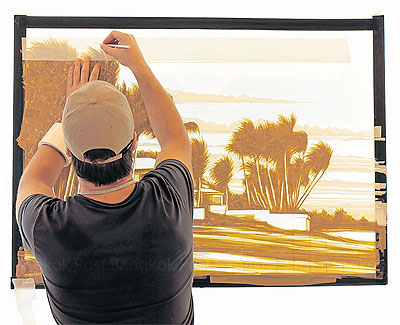