Jakkai Siributr’s textile and embroidery art has developed over the past decade into keen, deep-rooted social and political commentary

You can call Jakkai Siributr a “textile artist” — he doesn’t mind. 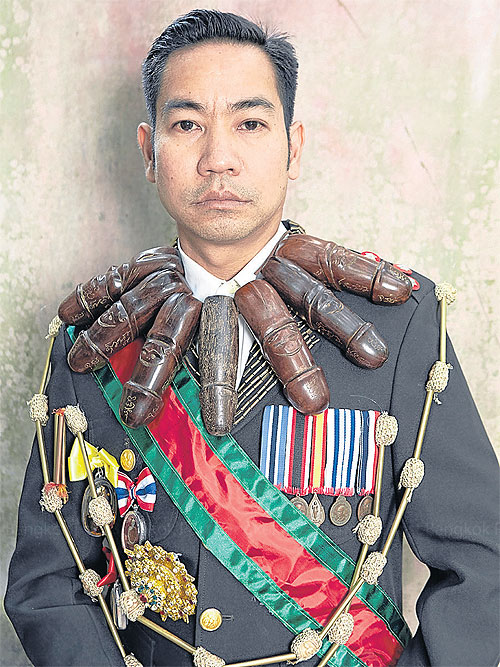 Or categorise his art as “craftwork”, “domestic” or even “feminine” — go ahead. After a 15-year career as an artist whose paintbrush and canvas are needles, threads and fabric, he is past the point of caring about being judged, defined or labelled.

Granted, Jakkai is more appreciated internationally than on his home turf. He has enjoyed a recent string of international exhibitions that reinforce his stature as one of Thailand’s premier artists. In fact the strong, sometimes disturbing political allegories in his later work counters the easy classification of his early “feminine” pieces. Last month Jakkai showed his exhibition “78” at Hong Kong Art Basel, presented by Yavuz Fine Art, where it was described by Art In America’s Richard Vine as “the most sobering work of all”.

The piece is a structure resembling the Ka’aba — the building at the centre of Islam’s most sacred mosque in Mecca, Saudi Arabia — made of steel scaffolding with bamboo and fabric. There are 78 kurtas — the loose, collarless shirts worn by South Asian people — are stacked inside. The numbers one through 78 are embroidered in Arabic script on each sleeve.

On the exterior of the structure, names are stitched in stylised Thai script. A bit of context is required here — the names some of the victims of the 2004 Tak Bai incident, in which the Thai military detained almost 1,300 southern protesters and stacked them in trucks.

On one hand, “78” was a commemoration of those deaths. On the other, to walk inside was to re-enact the tragic moment when the victims suffocated or died of organ collapse while inside the trucks. Based on the concept of the work and its effect on viewers, it’s no wonder Vine said it could “help make Hong Kong and the Art Basel fair something a little more substantial — something darker and truer — than what it otherwise might be”.

Jakkai’s recent exhibition, “Transient Shelter”, is an exploration into the transience of worldly success and social status through a grotesquely decorated civil servant uniforms. It was on show at Tyler Rollins Fine Art in New York City, and was reviewed by Holland Cotter of The New York Times as having “a distinctly Buddhist subtext ... it doesn’t take familiarity with Buddhism or Thai culture to grasp the basic idea here: that in the end, all hierarchical human power is ultimately reduced to the shared rank of dust to dust”. 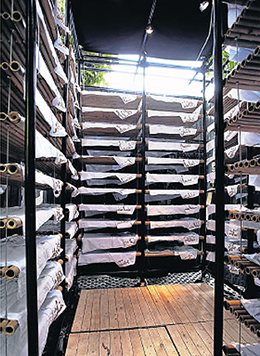 The interior structure of Jakkai Siributr's installation '78'. (Photo courtesy of the artist and Yavuz Fine Art)

It is a leap in his career after relatively little attention in his home country over the years.

The 44-year-old studied textiles at Philadelphia University and later printed textile design at Indiana University, Bloomington, for a master’s degree. Even before embarking on an artistic career and facing other challenges in the concept and approach to his work, the very technique he chose was already a disadvantage in the art world.

“Back then, the state of textile art in the art world was like a bastard child,” Jakkai said. “It was during the transition period of it from a craft to fine art.”

Jakkai said that when people hear he works with textiles, they form an idea of what his art will be like, something “domestic that is probably done only by female artists”.

“I can’t force how people think of my work,” he said. “I stopped trying to do that a long time ago. What I do is close to my heart and my culture. Textiles are everywhere in Thailand; we use them all the time. Why do we have to categorise it? It’s just a technique and a material. What really matters is the outcome.”

Jakkai always loved art, but didn’t always believe he was good enough to become an artist. He chose textiles as a medium because his late aunt ran a small batik
atelier out of her compound, as well as regularly exhibited her own textile art. Growing up in this environment made him think that textiles could be a way to make a living when he grew up.

“I was never meticulous enough to do architecture or graphic design. I like art, but I also wanted it to be commercially viable.
I have always studied it, but I never thought of becoming an artist. Being an artist in Thailand in the 80s or 90s was tough, and to put it plainly, I didn’t want to be a starving artist.”

In Thailand, he began teaching in the textile and fashion design department at the Faculty of Fine and Applied Arts of Thammasat University. Teaching was the catalyst behind him beginning an artistic career.

“I was trying to teach my students about textile art, but nobody understood what it was,” said Jakkai. “They were not familiar with it as contemporary art. There were just a few artists then who used textiles as a medium. I just decided to create it to set an example for them. After that, I realised it’s not bad at all to teach and make art at the same time, so I started to have exhibitions every year.”

The early years weren’t easy for Jakkai, both in terms of his technique and his work’s concept. Unlike his recent exhibitions, his early work lacked the power to immediately grab and strike viewers with emotions and ideas in a flavour and style that was unique. 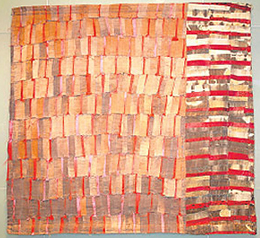 One of the artist's early abstract works.

“[My early work] was all abstract, with emphasis on texture and colour,” said Jakkai. “There wasn’t much political content or social context in them. I was stuck to how I was trained in school — textile art was supposed to be just decorative work for the background. It wasn’t supposed to have figurative elements like paintings did.”

As a result, Jakkai often resorted to painting only when he had a story to tell, which required the use of figurative elements.

“At the beginning I was like anybody else. I got inspiration from travelling to the sea, forests and mountains, and those colours were transferred into my abstract work. Whenever I had stories to tell, those would appear in my paintings instead.”

It wasn’t until the exhibition “Strange Land” at H Gallery in 2005 that his textiles began to contain figurative elements. It was only painting on cloth, then placing it on a textile background, but it was a big shift from his previous work and the start of a radical development that followed.

After the 2005 show, Jakkai took a long break from exhibiting his works, focusing instead on experimenting with ways that could make his work different and better. He wanted to tell his stories more clearly with the techniques and materials with which he was familiar.

“During that period I had no deadlines to worry about, so I could experiment with whatever I wanted to do — stitching the material in figurative ways and trying to find new ways to present my work.”

One of the great pushes in developing his style during this period came from a comment made by a friend, an art critic, during a dinner party at his home. Jakkai asked a friend what he thought of his work, which was hanging in the room.

“He said it was a piece of sh**,” said Jakkai, good-humouredly.

Jakkai said that the friend probably doesn’t remember it now, and though he was angry at the time, he later began to understand. “He asked me why my work had to exist only in a two-dimensional frame, why it couldn’t be more than that. What he said was true.”

His following exhibition, “Temple Fair”, opened three years later at Tyler Rollins Fine Art and saw a clear and bold shift in his style. His textiles no longer existed flatly, within a two-dimensional frame. Apart from figures that started to appear on his textile canvases, objects were put into play, creating a better impact and making it more accessible to viewers.

“It’s a challenge for me,” said Jakkai. “My goal is to bring out something out of what people call craft and domestic, and present it in a different and more interesting way.”

Religion is one theme that has remained predominant since his early days. Having lived in the US for so many years, the state of Buddhism in which he found himself upon his return to Thailand became the subject of his work.

“When I got back I didn’t understand much about the current state of society,” said Jakkai. “What I knew was what I remembered from being a kid, that things were supposed to be like this and that. But after a time I realised how it really was, that Buddhism is not really Buddhism. I began to see more on which to comment and criticise — why do people get so drunk during temple fairs, or things like that. I’m always curious and I brought that out and used it as material for my work.”

“Karma Cash & Carry”, his 2010 exhibition at Tyler Rollins Fine Art, was a clear example of this. Through a series of works on textiles alongside installations and video, the concept of Thai popular religion was more lucid, satirising practises like fortune telling and the predictions of winning lottery numbers.

“Because it was a show at an institution, those who used to have a preconception of what my work was could see it. Many good opportunities arose from that. Curators started to take interest in my work.
I started to feel more confident.”

In “Plunder”, Jakkai’s 2013 exhibition at Yavuz Fine Art in Singapore, his work shifted towards politics. This was also a complete change in terms of his technique, from figurative shapes on two-dimensional textiles to installation works with embroidery. Jakkai installed 39 Thai civil servant uniforms, which hung lifelessly around the exhibition room, each containing a roughly embroidered face of a familiar Thai politician.

“Living in this country, how can we ever avoid politics?” said Jakkai. “Before, I just disliked one side and didn’t look into it that deeply. But at the end of the day, I realised that all politicians are bad and people are always f***ed up. It’s us against the system.”

“Transient Shelter” at Tyler Rollins Fine Art was a continuation in terms of techniques used in "Plunder". He created 10 elaborately embroidered uniforms of Thai civil servants, high-ranking police and military personnel. Instead of medals and badges, he decorated them with Buddhist amulets and animalistic talismans, such as the phallic palad khik. On other pieces, he grotesquely embroidered words.

Along the walls hung self-portraits of Jakkai in these uniforms. His facial expressions and the way he posed were inspired by his ancestors’ funeral books.

While those macabre decorations were a satire of worldly success and social status, Jakkai’s use of dilapidated backgrounds for the portraits suggested inevitable decay and death.

From flat, abstract textile work to embroidery and installation art, Jakkai has developed over the past decade in his technique, approach and ideas. From simple colours inspired by travelling, he has moved on to social issues, religion and animalism, then to politics and humanity, as vividly portrayed in “78”.

“It’s a question of how far I can take this basic technique,” Jakkai said.

After years of hard work with little attention from the local art scene, Jakkai is more than ready to bask in his international recognition.

“Finally,” he said, hardly smiling, at times seemingly lost in thought. “[But] the only thing to do is to keep going and keep going.” 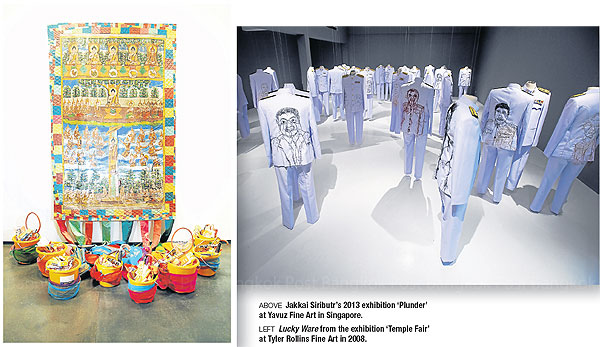 Photo courtesy of the artist and Tyler Rollins Fine Art