All figured out
Life
Arts & Entertainment

In with the new, but not necessarily out with the old. As the film and television production company Kantana enters its third generation, the founders’ myriad of grandchildren have begun to step into the spotlight to take over the different wings of the empire. On the film business side comes Kulp Kaljareuk, 28, an upcoming filmmaker with an MA in producing from New York Film Academy who currently heads Kantana Motion Pictures, a subdivision of Kantana. His debut as director, the thriller Hong Hoon, will hit cinemas nationwide this weekend.

The majority of Thai people associate Kantana with soap operas and television shows, but one thing most are unaware of is the fact that almost all films shown in Thailand (including Hollywood titles) touch down at the company to go through technical preparation before their releases. “We’ve been doing post-production for movies for a long time,” Kulp explains. “We do the sound editing and colour editing, but most people think we just do lakorns (drama series).”

Using the company’s solid background as a sturdy foundation, Kantana Motion Pictures, aims to enhance its presence in the film industry with the release of Hong Hoon (Crack My Sin). The choice of this story, penned by his grandmother, is a rather fitting debut for Kulp and one that signifies a passing of the torch within this entertainment dynasty.

The original Hong Hoon was a Kantana-produced television series that had the nation engrossed, albeit in a petrified manner, when it first aired in 1976. The tale of familial jealousy and cursed wax figures that come to life became so popular when it was released, that it quickly transcended its radio drama-beginnings and was remade twice for the tube before finally hitting the movie theatres.

Kulp’s spin on of the legendary thriller, however, is nothing like audiences have ever seen before. It’s a darker and gutsier path that he’s chosen to take, but it’s one that his grandmother has given the green light to. “While researching for the movie, I simply talked to my grandmother,” Kulp recalls. “She’s very supportive and believes that as times are changing, there’s little point in doing what’s already been done.

“She, herself, would like to see new things, so it’s not like she said, ‘Hey, that’s mine, you can’t touch it!’ My grandmother definitely told me to go for it and make it even better than what it was, from a new perspective.”

As someone who has a penchant for ominous thrillers and horror films, he very much intends for Kantana Motion Pictures to be known for producing dark movies. Dark, but still with plenty of food for thought, however, and not just a flick that throws good scares at you.

“We’re not doing happy movies,” explains the director. “GTH Studio makes productions that attract teens and Poj Arnon is known for making 'gay' comedies, so why wouldn’t I make movies my own way? Why would I follow other people? I believe [if you make films your own way] your own kind of audience will emerge, after some time.”

Despite the obvious serious passion and conviction that the young director speaks with, he chuckles at the “fiery flame of a new generation” label that the Thai media have given him.

“That is so over the top. I don’t think I’m fai rang, really. I’ve just made a movie because I love movies and I love making them. It’s fun and I love the atmosphere on set. It’s like a family and you don’t have to worry about the outside world or anyone else while you’re living on set for 30-40 days. It’s all very enjoyable and everyone is happy with the work when it’s done regardless of how it turns out.”

Kulp’s intention to blaze his own way in the movie industry is but a reflection of how he has always done things. It’s surprising, especially for a man to have grown up surrounded by the showbiz industry all his life, but his passion for film only started to reel him in after an internship at film production house 6th Element during his third year of studying entertainment media production at Mahidol University. This revelation only came after stints at Assumption University of Thailand, Thammasat University and a different faculty at Mahidol, where Kulp studied unrelated subjects. He even opened a bar, before realising that, in fact, his roots in entertainment might just be his ticket to survival.

“Nothing worked out and to be honest, I chose that faculty because it seemed to be something I could actually make it through,” Kulp says. “Now that I think about it, I did [survive] because I understood everything so quickly. Interest or no interest, I’ve been trained since high school to understand the processes in post-production, be it in the animation, sound or sub-writing room. This was why I knew exactly what professors were talking about while others struggled to get a picture of things. It became easy, because it’s always been in me.”

Rattanarat “Ploy” Aurthaveekul coincidentally shares the same nickname as the main character of Hong Hoon. Although better known as one half of the twins Petch-Ploy, she is making her own mark with her second foray onto the silver screen.

Any haunting experiences on set?

We filmed at a large, old house at night-time so yes, it was a scary atmosphere but there were lots of people everywhere, so it was OK. There were probably more people than ghosts so I knew that they wouldn’t come out.

How different or more difficult has making this film been, compared to Rao Song Sam Khon (That Sounds Good)?

It was completely different because that That Sounds Good was a romantic road movie and I played a character who was deaf. Although in this movie I play someone who isn’t afflicted with any mental or physical disabilities, the character is still quite suppressed with a lot of bottled-up emotions because of family problems. You have to start with zero with every movie. It’s a new character every time, so with my first movie it wasn’t very easy, and Hong Hoon wasn’t all that easy either, despite my previous experience. As it was a new script, character and filming technique, it was difficult in different ways.

Do you believe in the black magic that features in the film?

I’m quite neutral about it, because I feel that going out to make a wax figure of yourself is something that not many people do, it’s certainly something that I’ve never thought about. White magic, however, like love potions and other enchantments, I often hear stories about people trying, so I find that much easier to believe. There is a saying in the film that you shouldn’t build a figure of yourself before you’ve passed away, which I find interesting, so it’s perhaps something worth looking into.

What was it like to work with Ananda Everingham?

He’s a very awe-inspiring actor, whether through his acting, the expression of his emotions or his power of concentration. His techniques and ability to do anything that’s required of him is very impressive. He’s also actually a really nutty person. Outside he seems like a very accomplished guy — he’s smart and the whole country loves him, but when you really get to know him, there is a really kooky side. He loves to play around and tease. He’s got a sense of humour and sometimes  does some weird dance moves on set.

Are you concerned about people being attached to you as a twin duo instead of just you as you?

Not at all. Depending on the type of work, they sometimes hire both of us and other times just one of us. It’s not like it’s a fixed thing. Our work interests are also very different. Petch has a very clear direction in the sense that she’s crazy about cats. She’s this cat-loving woman that runs a cat cafe. I like clothes, so I sometimes help people with designing or making costumes. I also have my own clothing line, Blackheart, that releases two collections per year. 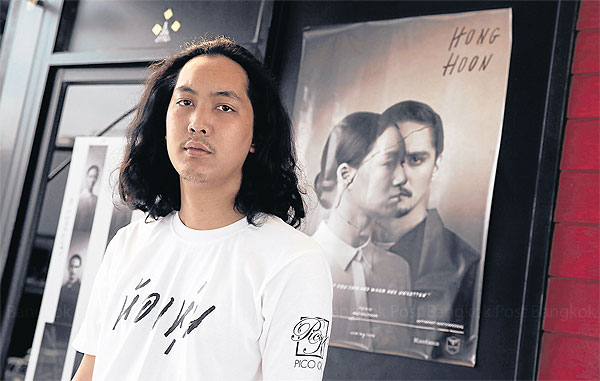