A decade at House

House has been a home for small films — small in Thailand at least — for the past 10 years. In a city where stand-alone cinemas are listed as a severely endangered species, the boutique theatre House in the RCA strip (of all places) is a welcome anomaly in the scene dominated by neon-splashed multiplexes that dictate the popular taste of the whole country. 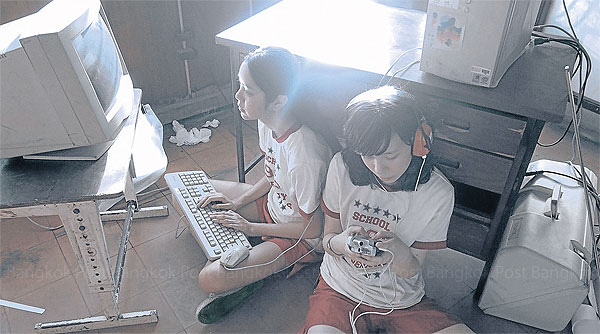 In July, House will celebrate its 10th anniversary. Run by Chomsajee Techaratanaprasert, the youngest daughter of film tycoon Somsak Techaratanaprasert of Sahamongkol Film, the two-screen cinema will host a month-long programme to commemorate the occasion. Throughout the month, House will bring back some of the movies that were big hits when they were first released, as well as titles that helped define the theatre as a cheerleader of independent movies, both local and international. The cinema will also screen a couple of classic films, courtesy of foreign cultural institutions.

Over the past decade, House has established a semi-cultish following. Unlike Lido in Siam Square, another venue for alternative films, House is located in an inconvenient location. The nearest BTS and MRT stops are Asok and Rama IX, beyond walking distance, and the building in which it’s located exerts an odd, desolate atmosphere, especially after the neighbouring UMG multiplex which screened regular Hollywood films closed down last year.

House is on the third floor of a building that feels half-abandoned, despite the brightly lit Tops supermarket downstairs, a couple of arcade games frequented by bored-looking kids and the newly opened concert venue Mongkol Studio. Five minutes away, you have the gaudy RCA with its throbbing clusters of bars and clubs. In short, the whole neighbourhood looks like a Thai version of an American strip mall from a half-decent town.

That gives House, a cleanly decorated space with a passable cafe and the reasonable ticket price of 100 baht, a special allure. Over the years, it has attracted loyal fans who prefer this quiet cinema to the bustling mall-based multiplexes: you come here to see a movie, not to walk around and shop and perhaps see a film if you still have time to kill. It’s also nice that the box office is never all that busy, meaning you rarely have to queue up to get your tickets here.

In its decade-long history, there were several films that brought the house down. The biggest-selling title, says House head of programming Teepanun Petchsri, was the director’s cut of the Thai film Rak Haeng Siam (The Love Of Siam), which made over 800,000 baht.

Despite sporadic hits and firm followers, House doesn’t make a profit. The niche market of viewers that seek non-mainstream movies has grown in the past 10 years, although not that significantly. The cinema’s somewhat awkward location is another disadvantage. If the same film plays at both Lido and House, most people would still prefer Siam Square to RCA. This is why House has tried to promote exclusivity by showing films that you can’t find at any other theatre in town.

There has been talk of moving House to a more convenient location, but it will probably not be any time soon. For now, it will stick around RCA, and considering this oasis is to mark its decade on the scene, it’s time to make a trip down there to celebrate the spirit of House. 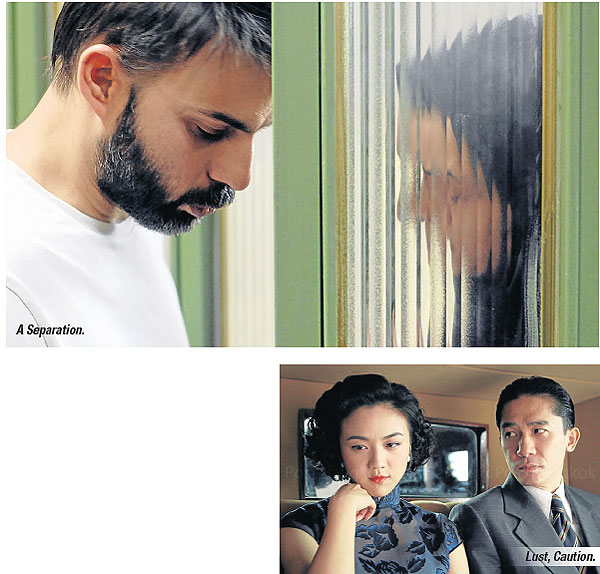 House plans a month-long programme in July. Titles include past hits, sneak previews and classics (some will be screened with a 16mm projector). Also on the programme are a number of “surprise films” — to be revealed on the day of showing.

Each film will be shown only once. Some of them have free admission (arrive an hour before to pick up a ticket) and others are available at the regular 100 baht ticket. Times will be announced closer to the date. Visit www.facebook.com/houserca for details. 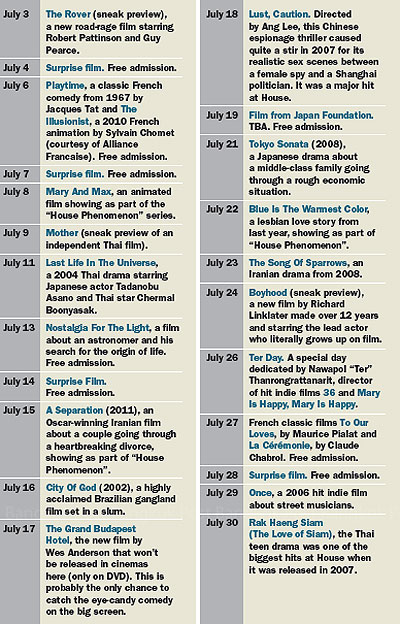