All he needs is Kill
Life
Arts & Entertainment

All he needs is Kill

Executioner. Murderer. Killing. Doing his job. The swirl of inner-conflict and the fog of moral dilemma must’ve accompanied Thailand’s “last executioner”, the man whose professional duty was to pull the trigger and dispatch death row convicts. Between 1984 and 2002, Chavoret Jaruboon executed 55 prisoners by gun, before the Thai law changed the execution method to lethal injection. 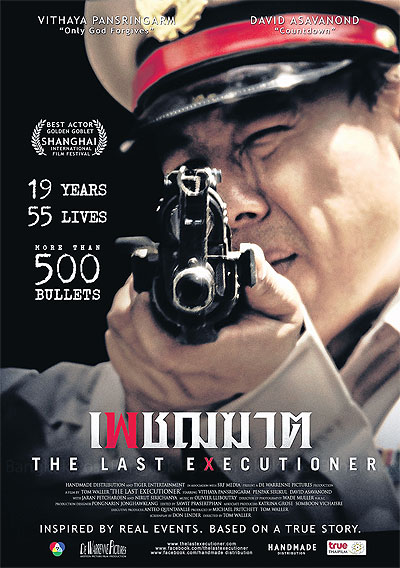 You won’t see all the 55 deaths in Petchakart (The Last Executioner), a Thai film that opens today, but you’ll see enough to understand the unlikely twist of fate that prompted a young rock ‘n’ roll singer in the 1960s to become a prison guard, then an appointed trigger-puller at Bang Kwang Prison. Directed by Irish-Thai filmmaker Tom Waller and starring Vithaya Pansringarm, the biopic is a thoughtful study of a troubled soul whose livelihood relied on his license to kill.

The Last Executioner opens in Thailand after its premiere at the Shanghai International Film Festival last month, where Vithaya was awarded best actor from a jury led by Chinese actress Gong Li.

“The idea to make the film came to me when I saw Chavoret’s obituary in the Bangkok Post,” says Waller, a producer/filmmaker who speaks fluent Thai and who has been based here for years. “The article said that he was a rock singer before he became an executioner, and the original image that I had was about how this man came from holding a guitar to holding a gun.”

From there, Waller and his screenwriter Don Linder (who had his script translated into Thai), worked with Chavoret’s family in an attempt to get into the mind of the man, who passed away two years ago at age 64. Waller researched the archives of Thailand’s Department of Corrections and obtained permission to visit Bang Kwang’s execution zone — the dreaded dan praharn — where his team took exact measurements of the space in order to recreate it on set (the prison never allows any film with actors to be shot on its premises).

Chavoret himself wrote two books about his life in Bangkok’s notorious prison, but Waller chose not finish them because he didn’t want to have a preconceived image of the man.

“Chavoret’s life, to be honest, isn’t so exciting,” Waller says with a laugh. “I mean, he’s an executioner, but mainly he’s a civil servant. How do you make a movie about a civil servant?”

So it was his family members — Chavoret was survived by a wife and three grown children — who shared their insights and helped Waller create some of the scenes that capture Chavoret’s intent, concerns and conflicts. In the film, we learn that Chavoret, who plays rock music in a nightclub as a young man, seeks a job at the prison and later becomes its Death Angel-in-resident because he wants to take care of his family.

An emotional scene in The Last Executioner shows Chavoret calculate his bank account and try to convince his wife that he’s saved enough to for her and their children to live comfortably after he’s died. That scene actually happened in Chavoret’s life, and seems to show his two biggest worries — the well-being of his family and his own death.

“Chavoret did many things to try to redeem himself [once he got older]. He knew that he had killed people, even though he’s just a part of the system,” says Waller.

One strategy the film uses to highlight the executioner’s inner-conflict is to actually put a demon in the film — David Asavanond plays Death, an annoying, persistent and inescapable spirit which haunts the conscience of Chavoret, who’s obviously the only person who sees it.

“That Chavoret had this job in Thailand, which is a superstitious country [with a belief in karma], adds to the conflict,” says Waller. “I saw Joan Of Arc, in which Dustin Hoffman plays the Devil, and that didn’t really work in a film [in which the characters don’t believe in karma].”

The film’s heaviest load falls on actor Vithaya, who once again finds himself playing a man who takes people’s lives. Last year, the 55-year-old actor played a lead in Only God Forgives, in which he beat up Ryan Gosling and killed a lot of crooks in most gruesome fashion. For The Last Executioner, Vithaya, an amiable, ever-smiling man, did research on Chavoret’s life, gleaning information from the man’s books and family members, and from tapes of Chavoret’s television interviews.

“From what I saw on TV, Chavoret was a soft-spoken and humble man,” says Vithaya. “But the biggest help came from his family. We hit it off when we met and their input greatly helped me understand the man.

“Chavoret is known as an executioner — it’s a harsh term for which people strongly judge. But the film makes it clear that he’s just a part of a system. He’s not the one who decides who should die, which is different from my character in Only God Forgives, who sets himself up as a judge and metes out punishment. More importantly for me, when Chavoret returns home, he’s a father, a husband, a family man. That’s what we wanted to show in the film.”

Until 1934, Siam sentenced convicts to death by beheading, before changing the method to firing squad, then to lethal injection. What has remained a constant in the Kingdom, however, is the death sentence.

“The film isn’t anti-death sentence, but of course we we’re not showing that executing a convict is great either,” says Waller.

“I think what we do is highlight the issue of culpability. It’s not up to Chavoret, and as he said himself, he’s just the end of the waterfall, not the source. He doesn’t judge. That’s how he lives with himself through his life.”

The Last Executioner opens today.
In Thai with English subtitles. 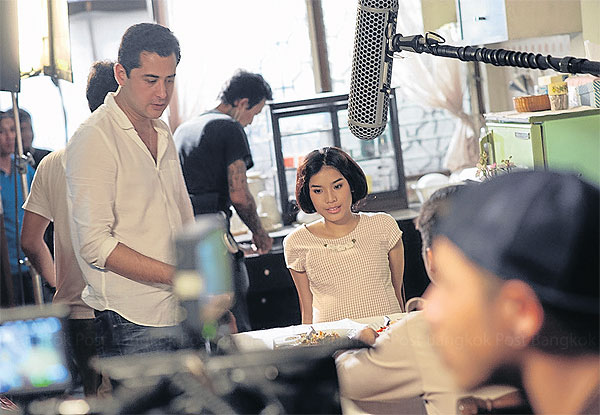 Director Tom Waller, left, on the set of The Last Executioner.