Editor of controversial publication Fah Diew Gan (Same Sky) on why having a clear, albeit contentious, voice is always better than whispering in the shadows

It's very rare for him not to smile. He smiles when he speaks. In fact, he even smiled when he was hauled into a police truck on the night the military announced Thailand's 19th coup. He also smiled — as some photographs showed — when he was subsequently brought back twice to a military camp. 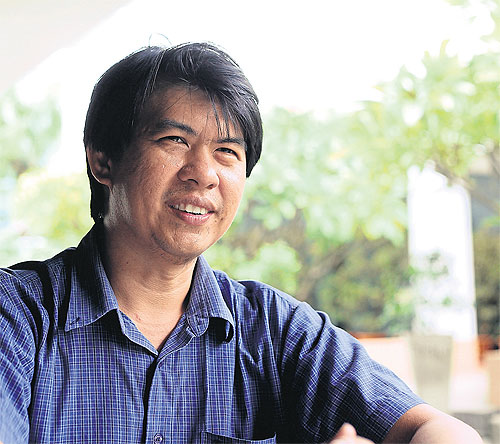 Thanapol Eawsakul, 41, always wears his smile like a badge. Along with a hairstyle that covers most of his forehead and hides half of his eyes, Thanapol has a rather boyish and innocent look.

"Of course, it's not fun. There's no pleasure in it, but I don't find it strange and I'm not bitter. I've been walking in and out of police stations for the past decade," he said from his Nonthaburi office.

Thanapol is the editor of one of Thailand's most controversial political and sociological magazines, Fah Diew Gan (Same Sky) which celebrated its 12th anniversary last Thursday. Widely known among friends as Puh, Thanapol has never been what we may call a celebrity activist or a highly-acclaimed scholar — the types who're always in the news when politics heat up.

His magazine tackles tough and taboo topics, but he's the opposite of those hip intellectual editors; he doesn't wear trendy clothes, or speak particularly eloquently while dishing out pithy sound bites. He sounds almost shy when he speaks. He's a humble man who's upset many, yet continues to count more and more people as his friends.

Human rights organisations, both local and international, dub him a dissident thinker, human rights defender and journalist who consistently works to create space for the voice of the marginalised and repressed in Thai society.

For young and needy students — and not just only those from Thammasat University where he studied — Thanapol is a big brother who often hands out money in exchange for help in transcribing interviews among other publishing and printing tasks. Not that he makes much money from his magazine; in fact, Thanapol has never really been paid for his role in running Fah Diew Gan. Financial nous is one thing that Thanapol is not known for. His friends call him nak leng — a Thai term meaning a big-hearted person who takes risks.

Taking risks is something he's grown quite accustomed to, especially after the latest coup on May 22. Thanapol's political ideology isn't one that fits with the current situation and despite being more of a behind-the-scenes person, he was first arrested along with several other people on May 23 during a peaceful protest against the coup. He was detained for one night at the Signal Department of the Royal Thai Army, Sanam Pao, and on May 23, his name was on the list of people summoned by the National Council for Peace and Order's live broadcast. As he was already in custody at that time, the authorities transferred him to the Army Club in Thewet and he was later detained at a provincial military camp for an additional seven days, the maximum permitted under martial law.

He was released and, like all others released from detention by the junta, forced to sign a statement agreeing to a number of conditions, including not exercising his fundamental human rights to free expression or assembly, or leaving the country without the permission of the junta.

On July 5, he received a phone call from an unidentified military officer who requested that he come to a cafe on Phahon Yothin Soi 7 in Bangkok for a conversation. He complied and shortly after his arrival a military officer in plainclothes brought him into custody in an unmarked private car and took him first to the King's Guard, 2nd Cavalry Division in the Sanam Pao area, and then to the Police Crime Suppression Division for further detention.

On July 7, an official from the Department of the Judge Advocate General in the Ministry of Defence claimed that Thanapol's Facebook postings constituted a violation of the conditions of his release.

He could have been detained for "attitude adjustment" a second time round for the full seven days, had the local and international human rights organisations not made such a loud noise against it. As it was, Thanapol's second stay at the military camp lasted five days.

Thanapol's smiley personality appears to be both at odds and somehow complementary to the interests of Fah Diew Gan.

With two key friends and business partners, Thanathorn Juangroongruangkit and Chaithawat Tulathon, Thanapol launched  the first issue (Thanathorn had to leave the project after his father passed away) on Oct 1, 2002. Fah Diew Gan was named after a book by respected royalist Sulak Sivarak called Chao Kha Fah Diew Gan (Nobles And Subordinates Under The Same Sky). Over the years the magazine, and its web board, became more and more a public forum for debates on taboo subjects. The publication also acted as a beacon for those who shared similar views, leading to a growing readership and firmly placing Fah Diew Gan on the radar of certain security and intelligence authorities.

"Fah Diew Gan is about egalitarianism and principles of involvement that should be respected in this country. It's not a publication that aims to overthrow the monarchy, as some people say," said Thanapol, a graduate of anthropology.

The magazine is released every three months and mostly on sale during exhibitions and seminars. It's available through subscription and at a few bookstores. Its pages have served as a place for non-mainstream writers and newly-emerged intellectuals to talk about such issues as Buddhism, the military, the southern violence and the monarchy. Hailing from Phangnga's Takua Pa District, Thanapol was the youngest of four children, born from a civil servant father and a housewife mother. Although a bookworm since childhood, Thanapol's interest in politics began like many other southern boys' did.

"I was not intellectually inspired by international popular literature [as was the fashion at that time], my eyes were instead opened by magazines and newspaper columnists since childhood," said Thanapol.

At Thammasat University in the 1990s, Thanapol was rarely found in classes as he was often busy producing pamphlets, magazines, brochures and posters and drafting statements.

He was deputy secretary-general of the Students' Federation of Thailand when Suriyasai Katasila (from Kasetsart University, who later became a leader of the Yellow Shirt movement) was secretary-general. Over time, however, the two men's politics began to dramatically differ.

Although he didn't necessarily get particularly good grades at university, Thanapol did pick up the necessary research and academic skills while working as an assistant researcher to Thai and Japanese scholars. The year following his graduation he produced a small dossier sponsored by the Political Development Institute, thanks to a recommendation by his senior friend from the same university, Mana Treelayapewat.

"It's good using other people's money to test your experience, but when the time comes that you can do things that you really want, you know that you're taking the right path. That feeling is quite good," said Thanapol, referring to his decision to launch Fah Diew Gan.

Thanapol and his friends sincerely believed that one could not truly understand Thai society and politics if we did not discuss the role of the monarchy in a constructive way.

"Frankly speaking, we didn't think in the early years that the issue would feature in commoners' conversation like it is today though," admitted Thanapol. Having said that, he also did not think that he and his friends were trendsetters either. "It just confirms that we were on the right track in discussing these issues," he said.

Contrary to his often humble and half-jokey tone, Thanapol was considered a brave media personality regarding his decision to discuss this very taboo subject. This is why he often faces constant criticism and strays close to the danger zone of lese majeste; a law under which a number of journalists and bloggers have been prosecuted. The fact is that Thanapol only became entangled in a criminal case during Thaksin Shinawatra's tenure as PM.

"I'm usually accused of being in the antimonarchy camp, but I have nothing to hide and I don't do anything wrong," said Thanapol. "A lese majeste complaint was made against me on April 1, 2006, regarding the content in Fah Diew Gan. Now it's under prosecutor consideration."

Thanapol seems to be forever lurking in a dangerous zone, but he believes having a clear stance is far better than those who speak on such a controversial subject by using pseudonyms and doing things underground.

"I hope that working in the public limelight on this difficult issue will prevent me from 'disappearing'. After all, I'm just earning a living by doing things that I'm good at and love," he said.

Though this is hardly the best time for activism and freethinking, Thanapol's optimism still moves him these days. He still makes comments on political issues on Facebook and supports friends in activities that he insists are legal.

Thanapol still believes that Thailand has a long way to go until it has a free flow of information and freedom of expression.

"Our magazine and publishing house is a niche market," he said, "We are not trying to compete with other contemporary publications. We have something to say and we keep saying it. After all, Thai society has been changing to the extent that more people are critical and curious and are capable of thinking by themselves," Thanapol said before leaving to return to his routine of running errands to keep his activities and businesses afloat and legal. And, of course, he's doing it all with a smile.