Out of the Shadow
Life
Arts & Entertainment

Out of the Shadow

Daen-Aran Saengthong has won the SEA Write Award, and the author minces no words when expounding his view on the country's most illustrious literary prize to whose rank of laureates he now belongs. 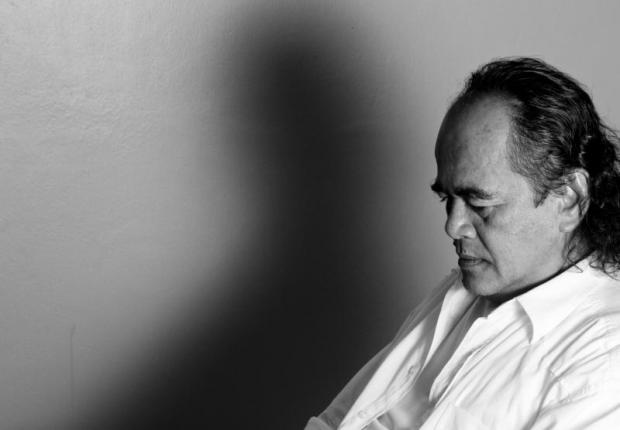 "The rule and criteria are ancient. This prize is narrow-minded. It answers to the middle-class taste and it still concerns itself with the kind of writing that promotes morality. Well, the world is bigger than that, the judges should step outside of their universities sometimes," says the writer.

"Literary merit is about beauty, yes, but it's also about smut, vulgarity, excrement, vileness — you know what I mean, help me come up with other words if you could — because they're part of the same thing."

This isn't ingratitude or egotism. This is Daen-Aran's modus operandi: avuncular humour, rebellious honesty, eccentric digression, uproarious jibes, jokey arrogance, anti-prude quips, all of which is manifest in the lush vegetation of his prose that makes up the forest of his mind.

Last month, the SEA Write committee — chaired by Bangkok governor Sukhumbhand Paribatra, along with a jury consisting of established scholars — awarded its prize to Daen-Aran's collection of short stories Asorapit (Venom And Other Stories). Many believe that the decision is a deserved, long-overdue honour, while others say it's a redundant gesture that exposes how slow the SEA Write can be.

On his part Daen-Aran, whose real name is Saneh Sangsuk, announces that his top priority now, by all means, is to dodge the official ceremony that's traditionally held at the ritzy Mandarin Oriental Hotel.

"I dislike something about this award, but there are things I love about it too," adds the 57-year-old. "The prize will help sell my books. I'm no longer a young man who can embrace the daredevilry of literary life and I need financial support to prop me up as I plunge deeper into writing my new novel."

The large, high-forheaded, sometimes-bearded, forever James Joyce-loving author may enjoy talking about the splendour of smut, but in the Thai garden of letters full of weeds and outgrowth, he's arguably the owner of the most beautiful prose in our contemporary literature. His high-style sentences are often lengthy, elegantly shaky, powered by descriptive lucidity and stately metaphor (the neck of an angry viper is "an arrow stretched to the limit of its bow"). The pages don't usually have many paragraph breaks, or sometimes none. Stylistically, he's a devout apostle of the Western modernists; thematically, he bears the torch of Latin American magical realism as folk belief and spiritual fables find their aesthetic incarnations. Venom, for instance, is the story of a king cobra that coils itself around a crippled boy as the villagers are too steeped in superstition to rescue him. 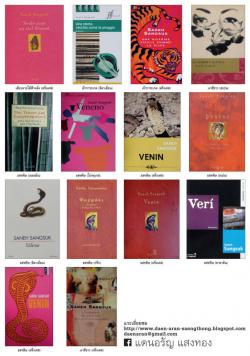 Daen-Aran Saengthong's books have been translated into many languages including Spanish, Italian and French. They're published under his real name Saneh Sangsuk.

When Daen-Aran voices his disdain for the SEA Write, one of his quibbles is that he believes he has written much better books in the past and Venom is not the book he's most proud of.

"It's readable, I'd give it B+," he says, and most fans would agree. A former interpreter at USAID and later a translator of English novels, Daen-Aran has been writing for over 30 years (he's the most senior writer in the shortlist) and the crown jewel of his oeuvre, as nearly everyone agrees, is the 1992 Ngao Si Khao, an epic fictional biography that's critically anointed as the first stream-of-consciousness Thai novel. The story of a man's existential adventure and his encounters with various women was translated into six European languages — the English title translated by Marcel Barang is White Shadow: Portrait Of The Artist As A Young Rascal. It couldn't be more Joycean.

Although Daen-Aran has a solid following in Thailand, he's nowhere near being mainstream. White Shadow, however, established his name in the international circuit and most of Daen-Aran's books have been published in many languages, including French, English, Spanish, Catalan, Italian and Portuguese, and can be found in European bookstores. The list includes his quaint 1950s-set love story Chao Karaked, the tragic tale of an insane mother during the times of Lord Buddha Diew Dai Tai Fah Klang, as well as the SEA Write-winning Venom. Given his proclivity, it's not hard to guess Daen-Aran's literary heroes: Joyce, Hemingway, Faulkner and Gabriel Garcia Marquez. On home turf, he worships at the altar of Usana Ploengtham, the mid-century novelist known for his erotic satire Jan Dara. For poetry, it's the Thai master Angkarn Kalayanapong, the high-priest of majestic language and heart-stopping verses.

"Joyce, yes, I read him and I thought it's possible to try something he did in English in Thai. Does it work? To an extent I guess. Hemingway? I like him a lot, but if he had submitted any of his books to the SEA Write, he would be disqualified in the first round," deadpans Daen-Aran. "And Marquez, I think a lot of Thai writers like him because there are many similarities between South America and Thailand."

Daen-Aran's stories have an archaic, droll, fable-like, sibilant and addictive quality, like thousand-year-old tales found in a box that doesn't age. But it's the style that sets Daen-Aran apart. The construction of his prose explores the texture and tonality of the Thai language, adopting the formalism of Western literature but flaying it into suppler, tenderer waves of sound and meaning.

Most "serious" Thai writers follow the school of "literature for life" — writing about hardships and social ills.

Daen-Aran, meanwhile, is a proud sensualist who savours each word and sentence and line and passage for its sheer beauty and metaphysical insinuation.

"In my writing, I aspire to purity. I don't aspire to social causes," he says. "Style is very important. I'd say that to me, style is more important than content. Well, if I say that both are equally important to me, I'd be an arrogant boaster, so let's say style means more when I write. And I still need to practice it.

"Thai language is so beautiful. There's a musical quality to it and when I'm able to put an order into my prose, when I'm lucky to pull that off, the beauty is beyond expectation. But that beauty doesn't only belong to beautiful words. When you write obscene or vulgar things, the beauty is also there. The most righteous and vilest words are both beautiful to me."

A native of Ta Yang district in Petchburi province, Daen-Aran spends most of his time there, planting trees and writing. At the moment, he's mapping his new novel while doing some translating work ("a collection of ghost tales by the likes of Guy de Maupassant and Dickens"). It seems fitting. Daen-Aran's stories aren't ghost stories, but they often have an undercurrent of dread and uncertainty, while spiritualism and history lend the grand arch to his narrative. Perhaps the gesture that best shows his progressive, rebellious spirit — as witnessed in his carping at the respected SEA Write — is his disbelief in literature as a moral force. To him religion, in this case Buddhism, isn't the same as moralism, or the propaganda of virtue that has been institutionalised as a role of Thai art.

"Religion, I think, is like music or like art, because you can be illiterate and still appreciate it. It's a form of purity. If you have a power of interpretation, religion can be fun and even slightly rude. The Tripitaka has many sexual references. The Bible too. Religious teachings come from greed, anger and obsession and we have to understand those too before we can understand virtues.

"What we should also understand is the importance of history, because the past is as crucial to us as the present and the future," adds Daen-Aran, whose stories are often set in a bygone era. "Now we ignore history, which means we're walking backward into the future. Only morons do that. We're in the age of information, but we don't have any information about ourselves, about where we came from. That makes us slaves. But it's funny that some people think slavery is cool."

When a book wins a SEA Write Award, Daen-Aran says, it's a signal flag for him to avoid it and so to prevent a charge of hypocrisy, he is determined to maintain this attitude towards his own work. However, although the writer is resolute to refuse his duty to show up at the award ceremony, it may not be possible.

"It's good to win this, but I try to improve myself to be a world-class writer, to match the standards accepted by the whole world," he says. "Even when you make a pair of flip-flops, it's best to try to make it for the world. To make sure that it stands the test of time. Writers should do that too, even though you may not be entirely successful."