LOS ANGELES — Sam Smith dominated the Grammys, taking home three of the top four awards, including song and record of the year for "Stay With Me,'' and best new artist, while Beck won album of the year.

"I want to thank the man who this record is about ... Thank you so much for breaking my heart because I have four Grammys,'' said Smith, who also won best pop vocal album for "In the Lonely Hour.''

Kanye West, who famously interrupted Taylor Swift when she beat Beyonce at the MTV Video Music Awards, almost walked onstage when Prince announced Beck's name. Some in the audience seemed shocked, from Pharrell to Questlove.

Pharrell and Rosanne Cash walked away with three awards each. Pharrell won best pop solo performance for a live version of "Happy,'' released in 2013. He also won best music video for the song and best urban contemporary album for "G I R L,'' beating Beyonce.

"I am going to moonwalk my way off the stage right now,'' said Pharrell, wearing a blazer and shorts.

Pharrell's performance of "Happy'' was dramatic with background dancers in black, musicians in yellow and a choir in white.

When the chorus was supposed to come in, Lang Lang played the piano skillfully. Hans Zimmer also played the guitar.

"Thank you, God,'' Pharrell, in a bell-boy hat, said at the end of the performance.

Rihanna gave an impressive vocal performance of "FourFiveSeconds'' with Paul McCartney to her right and Kanye West to her left. Her hair was slicked back, and she rocked a black suit like her co-stars Katy Perry, in all white, sang the ballad "By the Grace of God'' after a woman who had been abused talked about getting help and moving on with her life. A video of President Barack Obama appeared before she spoke, and he encouraged artists to help out.

"It's on us, all of us, to create a culture where violence isn't tolerated,'' he said.

Another serious moment came with Prince, who earned a standing ovation when he walked onstage to introduce album of the year. 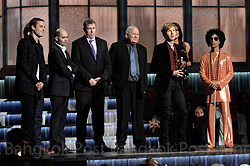 Recording artist Beck (second right) and members of his production team accept the Album of the Year award for "Morning Phase" from singer Prince (right) onstage during The 57th Annual GRAMMY Awards at the at the STAPLES Center on Sunday in Los Angeles. (AFP photo)

Madonna, dressed as a matador, performed "Living for Love'' atop a platform surrounded by a plethora of background dancers wearing bull masks. A choir did most of the singing, while Madonna danced and the audience at the Staples Center clapped in unison. She ascended into the air as the performance finished.

West performed on a nearly pitch-black stage, with a light glowing from under his feet (he also sported the new sneakers he designed). He sang the new song about his late mother, "Only One.''

Annie Lennox was a powerhouse when she sang "I Put A Spell On You'' and joined Hozier for "Take Me to Church,'' nominated for song off the year.

"This has been such an incredible year,'' she said, thanking her "beloved husband'' and "my daughter who is watching.''

In one of 23 performances, AC/DC kicked off the show with a performance of their latest single, "Rock or Bust,'' and then transitioned into the classic "Highway to Hell.'' It earned a rousing applause from Pharrell, Lady Gaga and Katy Perry, who wore devil horns.

Ariana Grande gave a stripped, piano-led performance of "Just a Little Bit of Your Heart,'' a song co-written by One Direction's Harry Styles, while Miranda Lambert brought a rock-heavy vibe to "Little Red Wagon.'' She won best country album for "Platinum.''

"I put my heart and soul in this record,'' she said. "Thank you so much for this amazing night. I love y'all!''

"Reagan was president last time I won a Grammy,'' said Cash, who won best American roots performance, American roots song and Americana album. "I just showed up for work for 35 years and this is what happened.''

Lamar, who lost in seven categories last year, marked a redemption by winning best rap performance and rap song for "i.''

The late Joan Rivers won best spoken word album for "Diary of a Mad Diva,'' and her daughter, Melissa Rivers, was on hand to accept the award.