STOCKHOLM - The Swedish startup that revolutionised digital music has a blanket response to claims that it pays artists a mere pittance: "two billion dollars". 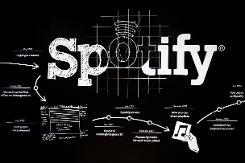 A timeline of Spotify accomplishments is pictured on a wall at the entrance to the company headquarters in Stockholm on Feb 16, 2015.

Since US pop empress Taylor Swift pulled her catalogue from the service, Spotify has regularly trumpeted its self-reported payout (1.8 billion euros) to the music industry over the past seven years.

The money has turned music executives from sceptics into believers in a model -- based on free music access coupled with paid subscriptions for an ad-free service -- that record labels rebuffed when Spotify started pitching it to them in 2007.

"We explained we wanted to give the music away for free and they thought we were crazy," Jonathan Forster, now Spotify's vice president for Europe, told AFP before returning to the much-touted figure.

"Two billion dollars later, hopefully they're feeling a bit more positive about that than they were then."

Since the still-unlisted startup hired him eight years ago, it has gone from a handful of employees to 1,500, and from a modest office flat in Stockholm to a five-storey tech temple that gobbles up local and worldwide programming talent.

Spotify has employees play table football and video games at their leisure and exchange ideas that are as fruitful as they are proprietary.

"Please wait to take any photos until your hosts arrive," an employee warns in a reception area that gleams with logos and a timeline of the company's milestone achievements that was last updated in 2013.

Since then, Spotify has reached 15 million paying users -- who are typically charged $10 for monthly ad-free access to more than 30 million songs -- and another 45 million who listen to the free, ad-supported service.

Meanwhile, some of the world's biggest music stars have derided their share of the earnings.

Aside from Swift, soul singer Aloe Blacc, AC/DC and Thom Yorke of Radiohead -- who said Spotify represented a "last gasp of the old industry" -- have all hit out at the company.

"How much did piracy pay artists?" Forster said, recalling a habit of illegal downloads and file-sharing that has plateaued in Sweden since 2008, according to the Swedish Internet Infrastructure Foundation.

Forster stressed Spotify's plans for expansion and brought the billions back up.

"If we're going to think about what this means for artists in a bigger way, we should at least think about multiplying that number by 10," he said.

"And 20 billion dollars to the music industry would be a very sizeable amount to artists," Forster added.

Cornered by protesting music stars, Spotify revealed in December that the service on average pays the music industry less than a dollar cent per stream.

Details on how much of that ends up in artists' pockets are murkier given the nature of major-label record deals, according to music industry analyst Mark Mulligan.

"The confidentiality clauses that Spotify signs with labels prevents them from being able to communicate how much value is delivered back to artists," he says.

According to a study published in February by French music industry trade group SNEP and accounting firm Ernst & Young, the recording labels pocket 46% of streaming companies' subscription revenues, while artists, publishers and songwriters share 17%, with the rest going to streaming providers and taxes.

Such estimates imply a status quo for a corporate music industry that Spotify itself never sought to upend.

"You always need the labels and the master rights. It's absolutely critical that we work with them," Forster said.

While his company holds the streaming crown at the moment, Apple is widely expected to start vying for it following the US giant's $3.2 billion acquisition of streaming service Beats Music last year.

In response, Spotify, which has yet to turn an overall annual profit, plans on going for broke.

"I think we could have a very profitable Swedish subscription music service today, but that's not what we're trying to do," Forster said.

"Our goal is much bigger than that," he added.

Still, formidable competition could reduce Spotify, which has entered 58 countries so far, to a fringe competitor.

"Spotify will need to make sure its rest of the world growth is strong enough to offset any losses in Anglo-Saxon markets" once Apple gets involved, Mulligan said.

But the Swedish firm remains unfazed. After all, it has disposed of giants in the past.

"When we were trying to get our first set of licenses we were more or less told not to bother because Nokia and Myspace jumped ahead of us in the queue," Forster said.