MAKUHARI, JAPAN - Japan opened what organisers are billing as the world's first "Otaku" summit Saturday, drawing visitors from around the world as the country looks to boost the international fan base for Japanese comic books and anime. 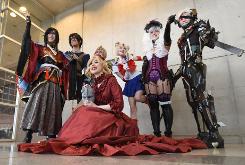 People dressed as their favourite anime characters pose for photographers during the Otaku Summit in Chiba, suburb of Tokyo, on March 28, 2015.

So-called Otaku -- usually translated as "geeks" -- from at least 18 countries and territories, many dressed as their favourite anime characters, were converging on the Otaku Expo at a convention centre near Tokyo for the two-day event.

The Expo is part of a special comic book fair held every five years, which attracts about half a million visitors, but this year's event marks the first time that groups from outside Japan are invited. About four dozen overseas Otaku groups were expected to attend.

"This is amazing. There are so many people of different cultures coming together," she told AFP.

The culture of Otaku has grown into a major industry in Japan.

The term is commonly used in the country to refer to people obsessed with Japan's unique take on comics and animation.

While it once carried a negative connotation, many Otaku are now proudly displaying their love for two-dimensional heroes -- while the number of foreign fans is also soaring.

"The number of foreign visitors has been increasing over recent years," said co-chief of the organiser, Comic Market Committee, Kahoru Yasuda.

Otaku culture is spreading worldwide "like a big snowball picking up a pace," Carter said.

"In my country, Italy, currently it's a very big thing," said Expo visitor Valentino Notari, 28, about the Otaku culture outside Japan.

"It used to be much smaller, we used to be sort of outcasts when we started back then about 10 years ago, and now it's becoming massive," Notari told AFP.

"It's quite fun and nowadays everybody accepts it."