Bangkok is alive with the sound of music
Life
Arts & Entertainment

Bangkok is alive with the sound of music

Last year was a quiet for musicals in Bangkok. This year, however, we have already seen two musical productions, from a small adaptation of George Bernard Shaw's Pygmalion at Thonglor Art Space to the original Broadway musical Beauty And The Beast earlier this month. This week alone, there are two more productions, from veteran Yuthtana Lopanpaibul's Thai version of The Sound Of Music opening tomorrow at Muangthai Rachadalai Theatre, to, beginning on Saturday, a stage adaptation by Teravat Anuvatudom of the 2004 film Hom Rong (The Overture), the debut performance at KBank Siam Pic-Ganesha, Siam Square One.

Life talked to the two directors about the adaptation process and the challenges of bringing what audiences love so much on screen to the stage.

The Sound Of Music

The youngest of the cast members in the Thai version of The Sound Of Music is six-years-old. That was the age when director Yuthtana Lopanpaibul first saw Robert Wise's 1965 film about Maria, Captain Georg von Trapp with his seven children, and their love for music and struggle against the Austrian Anschluss with Nazi Germany.

"My dad took me to see it at Krungkasaem cinema the year it was released," said the 55-year-old director, who was able to spare some time for an interview before a complete run-through of the play earlier last week. "I remember how it was so long and even though I couldn't understand a word, the music always stayed with me. My dad also had the film soundtrack on vinyl and I kept listening to it until I knew what 'doe, a deer, a female deer' was all about."

While most people know the story from Wise's 1965 film version, The Sound Of Music, based on the memoir of Maria von Trapp (The Story Of The Trapp Family Singers) was originally a 1959 Broadway production, with music by Richard Rodgers, lyrics by Oscar Hammerstein II and book by Howard Lindsay and Russel Crouse. This version, with performers singing in Thai, is translated from the original Broadway script.

While Chatayodom Hiranyatsathiti plays the stern Captain Georg von Trapp, Thananthorn Neerasingh and Nathapatsorn Simasthien take turns as the free-spirited governess Maria, who looks after Captain Georg's seven children. Except for the eldest sister Liesl von Trapp, played by Arisa Homgroon, there are two cast members for the rest of the six children.

The project began about a year ago when Yuthtana and Poruethai Narongdej of Guts Entertainment had ambitions of writing a musical but didn't know where to start. Ideas about creating an original work were raised but quickly dropped. Yuthtana thought it was better to buy an original script which was already a favourite and make a Thai adaptation. The Sound Of Music struck both of them as ideal as it appeals to kids and adults alike.

"One day Poruethai called me and said that she had already bought the rights for the original script from Rodgers and Hammerstein," said Yuthtana. "I was quite taken aback by the fact that I was actually about to direct a musical. Yes, I'm a musical obsessive and yes, I have played a part in a musical before, but I have never directed one."

"I began by searching for the owner of the copyright," said Poruethai. "After a few wrong turns, I found Rodgers and Hammerstein. We spent quite a long time discussing the detail; they even flew here to talk. Finally, we had to send the English translation of our Thai version for their approval."

Asked if there's a lot of pressure in retelling a story held dear by generations, Yuthtana, who's known best for directing TV series, said that he wasn't worried as the most challenging part — lyric translation — was undertaken by a trusted hand. The translator Narin Prasoppakdee is Yuthtana's friend from Chulalongkorn University's Faculty Of Arts. Narin had previously translated songs for pleasure and for them to sing together. When the project began, Narin joined the team and translated all the songs. Except for a few minor changes in word position, the translation of all the songs is line-by-line.

Yuthtana admitted he has some concerns about how Thai audiences will take to their version, given their familiarity with the film.

"We based this production on the original script," said Yuthtana. "People might wonder why this song is in this scene and why the sequence is not exactly like the film. Even though we kept everything exactly the same out of respect for the original script, there are some elements in some characters which we have added to fit it more to our context.

"I want the audience to forget Julie Andrews for the time being and enjoy this Thai version. This proves that Thai people have great potential to create productions of a quality close to what you will find abroad."

Most people remember Ittisoontorn Vichailak's 2004 hit Thai film Home Rong (The Overture) by the scene in which two musicians engage in a fiery duel of ranad-ek — Thai classical wooden xylophone. Prodigal Sorn and Khun In battle melodies out to the exhilaration of the audience.

As a debut production for KBank Siam Pic-Ganesha theatre on the 7th floor of Siam Square One, director Teravat Anuvatudom of Workpoint Entertainment's subsidiary Toh Gloam Television is dusting off the original movie script and bringing the scene back — live — this time without help of film editing, along with live orchestra and pi phat, or ensemble of Thai classical music.

"To be honest, I'm not confident about anything," said Teravat about transforming the film, which won several awards in Thailand and was the country's official selection for the Academy Award for Best Foreign Language Film, into a stage production. "Like what I have done in the past, there are no principles, only pictures in my head of how I want it to be. Then we kept working on it, fixing it and putting it all together again."

Hom Rong is a fictionalised story based on the life of Luang Pradit Phairoh, or Sorn Silapabanleng, the best-known Thai court musician who lived in the late 19th century to the 1940s. The main character Sorn is initially prohibited by his father from playing the instrument because of the death of his brother, who was a talented musician. After some defiance Sorn is finally permitted to play, but his character is marked by arrogance and this is put to the test when he engages in a duel with Khun In, a ranad-ek master from another ensemble.

"The title The Overture is quite apt for the theatre's opening production," said Teravat. "Ittisoontorn was quite happy when I told him I wanted to do this but he was also worried because it's not like a film in which editing can help. For me, the most challenging part was finding the lead actor for Sorn. I knew that if we couldn't find the actor for this character, there would be no production at all. This person has got to be able to do everything: act, sing and play ranad really well."

A few months after starting the project they found Kornkan Sitthikoses, who started his entertainment career in a KPN singing contest. The first few months for Kornkan were consumed with ranad-ek training. From starting as a mediocre player, Teravat believes Kornkan is now in the top-10 players in Thailand. Sorn's rival Khun In is played by Taweesak Akarawong, a ranad-ek master who was actually behind all the instrument playing by Sorn in the film version. While Teravat has brought in Rossukon "Khru Ngoh" Kongkate as an acting coach, traditional musician Asadavuth Sagarit, great-grandson of Luang Pradit Phairoh, oversees the traditional Thai music section. Despite what many might expect, the music in the production will be newly-written pop songs, with a flavour of Thai traditional music.

"Even though this production is based on the film version, I have made some changes," said Teravat. "There are some parts which Ittisoontorn cut out but I which I have added in.

"I think this will make the story even more complete. We have tried to add humour while at the same time maintaining the drama of the film." 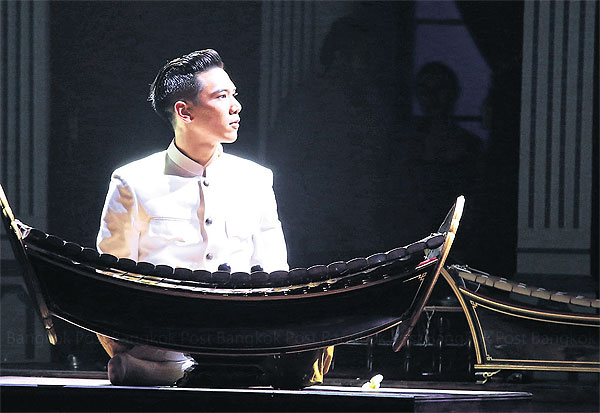