Thai director Ekachai Uekrongtham began his career in theatre, but for over a decade has worked in the film industry. His latest film, action-thriller Skin Trade, is currently showing in cinemas and will open in the US next month.

Action films aren't exactly new to the director. In 2003, he made his directorial debut with Beautiful Boxer, a biopic about the life of Thai boxer Parinya Charoenphon, who is also a transgender woman. 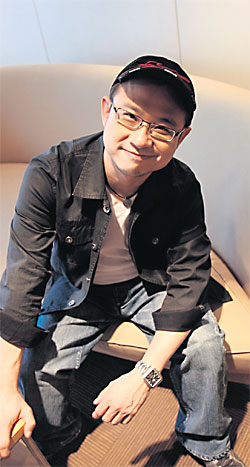 What is the style of action in Skin Trade?

I don't like separating action from drama. I want the transition to be organic. The characters were driven to the point where they have no other way to go other than to communicate physically.

Jaa and Dolph's characters get into a misunderstanding. It got to the point where they solve their problems with fists. I talked with both of them. I wanted to see not just punching and kicking, but also internal dialogue. Sure, they do communicate in dialogue, but it's being expressed in a physical form. It creates layers in the scene.

What impressed you most while shooting this film?

We were looking through various locations to stage our fight sequences. The script only said to fight, it didn't specify where. In the end, we settled for a rice barn.

Rice is the essence of life. The film breaks down the soul of two men to the core. They have nothing left except to fight one another. I quite like the concept, and the symbolism it represents. The actual filming, however, was very difficult. The place was full of dust. Our crew wore masks, which actually turned black during filming. Our actors, however, couldn't use them. But they were really cool about it. They fought on.

What are some of the differences you've found between stage productions and filmmaking?

As film is quite expensive to make, there are lots of outside influences. For stage productions, the scale is smaller and we get to do different things. It offers a higher degree of creative freedom. Stage represents the world, but film reflects the world. Stage relies heavily on dialogue. Film, on the other hand, is visually strong. I often ask myself, 'What do I hear during the stage production?'. But for films, I ask, 'What do I see?'.

To me, the core of every film is the drama. But what's covering it is always changing. In making each film, I choose the one that allows me to learn new things.

Are there any techniques you used in this film that were influenced by those used in stage productions?

The foundation of stage production lies in characterisation. On stage, they have nothing to hold on to. There's no editing room. So we have to help them create, believe in and know the characters.

Transitioning into film, I used this technique. I helped the actors create a back story for their characters, to make the actors know their characters. The film would go really quickly, but it could be telling a story that spans 20 years.

I once asked Dolph and Jaa about their saddest day. What's their happiest day? What hurt them? What makes them happy? Stuff like that can help them better grasp on their characters.