Jenjira Pongpas has no clue what Blissfully Yours, the 2002 Cannes Film Festival's Un Certain Regard prize-winning film by director Apichatpong Weerasethakul, is all about. Not while first reading the script, not while acting it in, not after the film won the prestigious award that heralded Thai art house cinema, and not even today.

"At the press preview I saw the film in its complete version for the first time," said Jenjira, 57. "I was so befuddled. I fell asleep in the cinema. To tell you the truth, I don't think the film should have won because I don't know what it's all about. From being so proud to be part of the film, I became so scared because I didn't know what to say when people asked me about it."

More than 10 years later, Jenjira is still working with Apichatpong, not only as his actress but also his collaborator and muse. As Apichatpong has risen to become one of the world's most visionary filmmakers — culminating with the 2010 Palme d'Or-winning Uncle Boonmee Who Can Recall His Past Lives, also starring Jenjira — the former seamstress who has become the face of independent Thai cinema has learned to appreciate her director's later works, especially after becoming part of his crew.

Blissfully Yours, by the way, is a nearly plotless love story that takes place in the sun-dappled woods near the Thai-Myanmar border, and stars non-professional actors and actresses.

Apichatpong's latest film Cemetery Of Splendour, or Rak Ti Khon Khaen, has been selected for screening in the Un Certain Regard section of this year's Cannes Film Festival (a complementary section under the Palme d'Or competition). Here, the relationship between the director and his actress has grown to the point that much of the story in Cemetery Of Splendour was drawn from Jenjira's personal life, which she wrote down in a diary and gave to the director.

"He just told me to write whatever I wanted to, my dreams or life experiences," she said when Life met her at her house at the edge of a field in the northeastern province of Nong Khai. "I was so surprised to see a lot of what's my personal life in the film, yet the way he presents it is very different from how I'm talking to you now."

It seemed almost like another life altogether; a life that had been tough, both domestically and professionally. Born and raised in Nong Khai, her father was Lao, a fact she only later found out, and at which she felt an ingrained feeling of resentment since a young age. Her mother remarried and had children, but she wasn't allowed to live with her mother's new family, even though the house was next door to her grandparents' place.

"I just couldn't understand why I didn't get to live with my own mother," said Jenjira. "I remember crying every night. It was only later that someone I knew in the village told me about my real father and secretly took me over to Laos to see him. It's as if I didn't exist, my half-siblings were very harsh to me."

After high school, she studied domestic science at Nongkhai Technical College, learning skills like making artificial flowers and sewing. It was during an internship at a department store in Nakhon Ratchasima that she met her boyfriend, with whom she later eloped to settle in Ratchaburi province, a long way from home. 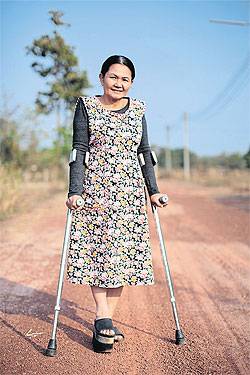 "I quit my job and decided to go with him," recounted Jenjira. "He seemed to me a gentleman straight out of novels but it was nothing like I expected. The house there was empty, there was no clean water in the area and we had nothing but a mat and a pillow. The neighbours were against me and my husband started having an affair and beat me up. It took me 10 years to gather my courage to run away with my two children."

Leaving her children under care of her grandparents in Nong Khai, Jenjira set out to find jobs in Bangkok with all the bruises still fresh on her body and face.

"I went to a job agency around Victory Monument area, having only 29 baht with me," said Jenjira. "The manager there, Khun Maliwan, was so kind as to give me another 100 baht and referred me to a sewing shop in Udomsuk area."

It wasn't all good news, however, as it was around this time that her husband discovered her whereabouts and came looking for her. After a short period of hiding, she decided to run away again and went to work at a golf course as a caddie and later as a maid at a house nearby.

It was only later when she set up her own sewing shop, and when her children had moved to live with her in Bangkok, that she began a career, as unlikely as it seemed, in the entertainment industry.

"My daughter and her friend went to this TV show shoot where audience members were paid to fill the studio and I tagged along. She also did commercials and the agent there just asked me to join, and it all began from there."

"That photo was poorly taken, I must have been 300m from the camera. Still, as a film, I figured they must need somebody old as well as the young and beautiful, so I wrote my pager's number on the back of the photograph."

Even when she was called into Apichatpong's office months later, she never realised she had got the part. She had never met Apichatpong, she didn't even know who he was.

"Not only was I unsure whether I got the part or not, they asked me to take off my clothes. They just wanted to know what type of undergarments would fit me because there was going be a sex scene in the film. I wasn't shy, it's just that the underwear I wore that day was ripped.

"You can imagine how confused I was. Suddenly I was in a sex scene shooting in the woods. I had no clue how the film was going to turn out, I was only given part of the script at a time."

That film, Blissfully Yours, garnered critical acclaim after it was picked by Cannes and won a prize — the first time in history for a Thai film. Jenjira and other actors played country folk, with their own, real-life mannerisms becoming part of the acting — commonly referred to as "non-acting" — and that kind of honesty would later come to define Apichatpong's films.

Even after a major motorcycle accident which crippled her leg, she continued to feature in Apichartpong's films and video art, complete with crutches, such as Syndromes And A Century, Uncle Boonmee Who Can Recall His Past Lives, Emerald and Mekong Hotel. In order to film Cemetery Of Splendour, Jenjira decided to postpone a major operation that promised to heal her leg. Now that the film is finished and is going to Cannes, she is finally scheduled to go under the knife in a month's time.

"Apichatpong doesn't want a celebrity in his films," said Jenjira. "We understand each other and I guess it's also because I'm a natural when it comes to life upcountry, which is the kind of story he wants to tell. During the whole time working with him, I never heard him complain about whether or not the audience will get it or not. It's always about doing the best he can."