As part of the National Book Expo opening on Wednesday, an exhibition showcases the evolution of Thai cartooning and its continuing relevance to politics

published : 19 Oct 2015 at 06:17
newspaper section: Life
writer: Kanin Srimaneekulroj
A political cartoon by Prayoon Chanyawong, who will be honoured at the exhibition.

'Everyone is 'drawing' the future," said Charan Homtienthong, president of the Publishers and Booksellers Association of Thailand (Pubat). "In this time of change and new beginnings, Thai people should start thinking about and working towards the vision of what Thailand should be, and to 'draw' the picture of a perfect Thailand."

The keyword is "to draw" (or waad), and that's the theme of the 20th Book Expo Thailand that will run from Wednesday until Nov 1 at Queen Sirikit National Convention Center. One of the two biggest book fairs in the country, this year's expo will feature more than 400 publishers, as well as 100 seminars and discussions on various topics, with one of the highlights being the role and relevance of Thai cartoons and comics in shaping the thought of readers. A centrepiece of this is an exhibition and seminar called "Is Thai Cartoon Dead?", as well as a special showcase to celebrate one of the country's most beloved cartoonists, "100 Years Of Prayoon Chanyawong: The King Of Thai Cartoon".

The expo is organised by Pubat, and in keeping with the "Draw" concept, it has gathered assistance from famous Thai cartoonists such as Piyapat "Art" Jeno and Anuchit Kumnoi aka Kiwtum (or "lowbrow"), alongside writer Prabda Yoon, who is vice-president of Pubat.

Charan explained that the concept of "Draw" was meant to stand for the uncertain future facing the nation, and how people should take part in making their visions come true.

And here enters the role of cartoons.

"Cartoons and comics have, for better or worse, become an integral part of the reading culture," said Charan. "The illustrated lines of comic strips have the ability to evoke emotions as well as written words.

"But are cartoons just for our entertainment? Can't they provide any knowledge or inspiration to their readers? How have their values changed over time? As so many Japanese comics and publishers have shut down, what is the state of Thai cartoons? These are some of the questions we mean to ponder, and hope that those who attend the expo will have a part in finding the answers."

Charan referenced the prominent 1950s comic book Astro Boy by Osama Tezuka as an example of a comic book that successfully served a deeper purpose than simply providing entertainment. Released in 1952, shortly after Japan's surrender in World War II, Astro Boy provided its audience with a glimpse into the potential dangers of technology -- a timely subject, considering the devastation Japan faced as a result of the atomic bombs in Hiroshima and Nagasaki.

The relationship between cartoons of old and the political situations of their times isn't difficult to see. Captain America, released shortly before World War II in the 1940s, was created as a response to the growing aggression of the Nazis. Superman was first created as a social activist vigilante, mostly fighting with crooked businessmen and politicians amid the Great Depression of the late 1930s. That relationship has always been evident in Thai cartoons, as well.

"The comics of my childhood have always been tied to political propaganda," said Charan. "An example is the Cold Fire comics [by master cartoonist Payut Ngaokrajang in 1965], which spread the anti-communism message."

The exhibition at the book expo traces the origin of Thai cartoons from the first commercial printing in 1917, when King Rama VI contributed his hand-drawn cartoon to a magazine, Dusit Smith, one of them poking fun at Germany and its defeat in World War I.

During World War II, when Thailand became a constitutional monarchy, Thai cartoons were heavily restricted, but at the same time used as a propaganda tool, and in the 1950s, the golden age of Thai cartoons saw a publishing boom and the rise of many vintage cartoon characters.

The exhibition also focuses on the role of cartoons during the Cold War -- how the close ties between Thailand and the US resulted in many Thai cartoon characters modelled after American comic heroes.

In the 1970s, Japanese comics entered Thailand and at the same time, the bloodied uprisings of Oct 1973 saw the explosion of political cartoons in newspapers -- an opposite from the restricted atmosphere of 1960s military rule. The exhibition then goes on to chart the downs and ups, and possibly downs again of contemporary cartoons at a time when the internet democratises the ability of anyone who wants to express their thoughts through drawing.

The special showcase "100 Years Of Prayoon Chanyawong" celebrates the role of the well-known cartoonist, who started drawing cartoons of traditional Thai literature in late 1938, then went on to become a sharp satirist of world politics and Thai dictatorial rule.

"In the 1970s, Prayoon's 'Kabuan Karn Kae Jon' [anti-poverty club] was a treasure of local wisdom on food and agriculture," said Charan. "It was one of the most popular cartoon strips of all time, and the compilation was named one of the 100 books all Thais should read."

Throughout the years, the use of caricatures and satirical situations to express opinions on serious issues such as politics can provide levity to topics that can be considered controversial, making the ideas being expressed seem less confrontational and easier to accept.

"Comic books have always been about what the people of that time are talking about," said Anuchit Kumnoi, the talent behind the popular Facebook page Kiwtum, which has more than 900,000 followers. "Politics is a timeless subject, one that will always be at the front of people's minds no matter the era. So its not surprising that politics and comics seem to have such a deep relationship."

Anuchit believes that the light nature of comics serves to soften a message or subject that could otherwise be too complicated or divisive, making it easier to digest and understand on the readers' part.

"Thai cartoons as we know them were born in a time when the nation was facing a rather dire political situation," said Art Jeno, whose comic book JUICE won an award at the 8th International Manga Awards in Japan. "It would be dangerous for writers of the time to express their opinions in an article. Comics can help make their intentions more ambiguous, and thus make them less vulnerable to those who may take offence at their messages." 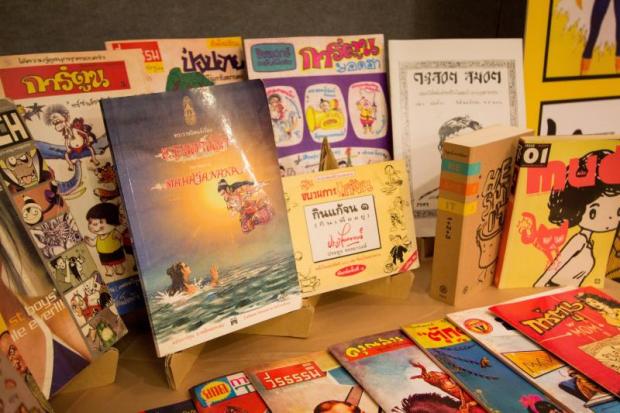 The accessibility of comics could also prove to be a useful tool for education, allowing children to learn about subjects such as history and science in a more engaging way.

"Naturally, children need to learn to read cartoons before they can learn to read a book," Charan said. "Therefore, if we believe that good books can create good people, then good comic books can do so as well.

"If we continue to view comics and cartoons as cheap sources of entertainment, then that is what they will continue to be. But if we can make our children interested in historical figures or science through comics, then that is something that is worth looking into, as well."

The current state and future trajectory of the Thai comic book industry will be the focus of one of the expo's seminars, titled "Is Thai Cartoon Dead?".

Social media sites like Facebook have shown Thai people that there is a wealth of talented artists ready to present their craft, like Jod-8-Riew, who uses his character of a "skoi" girl called Noon to poke fun at various social issues, or Kon Arai Pen Fan Mee (What kind of guy would date a bear?), which uses simple cartoons to show aspects of a romantic relationship. 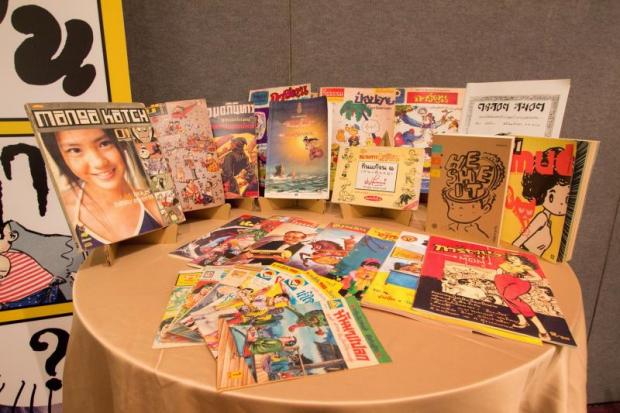 Vintage Thai cartoon and comic books from the past 50 years.

"The purpose of the discussion isn't to definitively say one way or the other whether Thai comics are dead," said Prabda, a SEA Write award-winning author, who will be one of the speakers at the seminar.

"Obviously, Thai comic books aren't dead. However, this discussion's aim is to create a conversation about what Thai cartooning is in today's context. What makes a comic 'Thai'? What are the actual characteristics that make Thai comics unique, or if they even exist? What form should Thai comics take in the future? These are all questions we seek to answer at the expo."