Sinxay is a story which appears in slightly different versions with slightly different names in Mon, Thai, Lao and Khmer. The plot is a classic quest in which a hero prince is banished by the machinations of evil siblings, travels long through forest and mountain, defeats many fearsome enemies, and is eventually celebrated in a great homecoming. Old versions were written in verse for recitation at festivals. Key scenes were popular with artists painting temple murals. During the nationalist era in the 1940s, the great littérateur of Laos, Maha Sila Viravong, began a prose version in a conscious attempt to create a Lao national literature. More recently, Sinxay has been celebrated as a kind of national hero in Laos. In 2005, Khon Kaen municipality adopted Sinxay as symbol of the city, and characters from the tale sprouted on the peaks of the city's lamp posts.

Peter Whittlesey, an American photographer, and his Lao wife Baythong became fascinated by the Sinxay story and its modern revival. They spent a decade translating the texts, visiting the sites, photographing the murals, and interviewing the monks, writers, performers and politicians involved in the Sinxay revival in Laos and Isan. The result is this self-published book now available on Amazon.

In old Southeast Asia, tales were public property. Authors freely updated old plots and borrowed good bits from other stories. Wisely the Whittleseys have not tried to locate an "original" or "correct" version of Sinxay. They call their contribution a "retelling" in the spirit of this flexible tradition. They have used the modern Lao prose versions for their outline, but have added detail from the old verse manuscripts which legendarily date back to the 16th century. And they have incorporated a sequel in which the slain villain is brought back to life to pave the way for a Buddhist-inspired ending in which all conflicts are resolved and everybody lives happily ever after. They have written this retelling in readable modern prose with minimal academic clutter.

Words are only part of the story. There are pictures too, lots of them. A prominent Vientiane artist, Khamla Phanyasith, has contributed a series of paintings on the tale. An American illustrator, Nick Bowen, has imagined some of the key scenes in a graphic, modern style, and also carefully redrawn scenes from temple murals in order to eliminate the deterioration of age. In addition there is Peter Whittlesey's very fine photography of temples, murals, door panels, statuary, textiles, landscapes and public art from all over Laos and Isan. It's a very graphic and beautiful book. 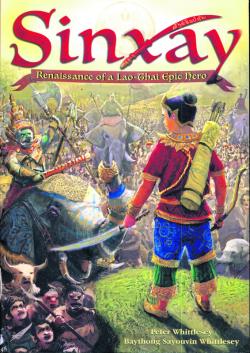 At the back, there is an essay on Sinxay's relation to the tradition of Jataka tales, another on the story's position in Lao literature, an account of the revival of Sinxay in Isan, a guide to some of the best temple murals of the story around Khon Kaen, some notes on magic and a guide to some of the sites and temples associated with the story in Laos. To round this off, there is a fantasy map of the tale and an exam paper to test whether readers have been paying attention.

Sinxay has probably become so popular because it is more complex and more subtle than many such quest stories. Sinxay is not just a prince who gets the girl in the end. Indeed, he has no "love interest" in the tale. The object of his quest is his aunt, his father's beloved sister. He is not a strapping superhero, but appealingly small and vulnerable. He is also properly human. In a climactic scene, he disrupts the easy and obvious resolution of the plot by being downright stubborn.

A strong theme of the tale is about overcoming conflict based on difference. Sinxay and his two brothers are banished at the start of the tale because they are born looking different from the normal, but are eventually acclaimed as heroes. The aunt is abducted by an ogre but then falls in love with him and initially does not want to be rescued. At the end, conflicts between humans, ogres, snakes and birds are all resolved by a Buddhist belief in the unity of life. I suspect this theme lies behind the tale's long popularity among the jumbled peoples of Southeast Asia, and behind its modern revival.

The Whittleseys have produced an unusual and beautiful book. Baythong has contributed her memory of hearing the story as a child while Peter has a photographer's eye for graphic detail. The book not only provides an English-language version of one of the great stories of the Southeast Asian region, but is also a fascinating study of the politics of literary revival. 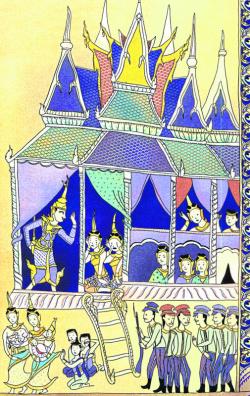 A scene redrawn from a temple mural.