It's impossible to not do a double take. At certain angles, his subjects are uncannily lifelike. At others, they shift, morph and disappear. The artworks illustrate the ephemerality of life, the Buddhist philosophy of suffering and the inevitable cycle of life and death -- concepts that abidingly fascinate the 35-year-old artist.

It's been 15 years since he first developed his unique style. Uttaporn first discovered his technique by accident while studying for his bachelor's degree at King Mongkut's Institute of Technology Ladkrabang. Seeing paint smudges on a mosquito net while working in his studio, he started to see the possibilities of the material and instantly began exploring new ways to work with the versatile and delicate fabric. 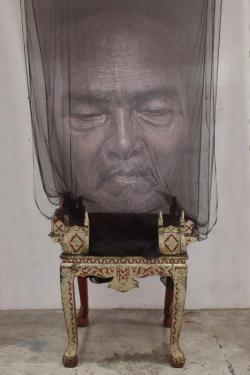 My Buddhist Saint (My Dad).

He's been sending his works to art competitions ever since, in hopes of getting his name out. Winning numerous awards encouraged him to continue developing the technique by enrolling in Silpakorn University for a master's degree.

His early works played with paints, thread, strings, and mesh in order to emphasise the 3D effect. But it was much later, when he started narrowing down his concept, that he started experimenting with the eerie, analogue 3D and hologram-like techniques. It's this series, titled "Dukkha: The Imagery of Suffering", that's now shooting him into fame.

"While studying at King Mongkut, I found the technique, but the idea and concept weren't clear," he says. "It was just superficial. But at Silpakorn, I had to analyse what the technique engenders and what kind of narrative it would fit with."

He decided to focus on what was nearest to his heart: his parents. "When I saw my parents getting old and sick, it was very emotional," he says. "When I painted them, they looked fragile, and there's an element of sadness and depression in there as well. I want people to see my works and look back at their own parents. When they're living, are you taking care of them? They're fragile and temporary, so if you take care of them well enough, you won't have to be disappointed when they pass."

It has taken many years for Uttaporn to perfect the otherworldly, holographic effect. His first set of works used a different technique altogether, but for what he described as the "floating figures", the first layer of fabric has to be very densely painted. Same goes for the second layer. It's the subsequent layers that start to play with light, volume and rhythm for the three-dimensional appearance.

"It's sort of an illusion -- a play between 2D and 3D," he says. "Everything has to be measured. I've done it so many times and have made many mistakes, so I know where to paint to make it look 3D. 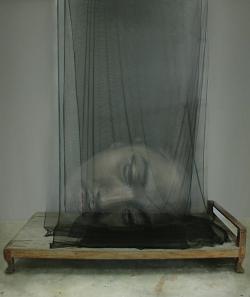 "Like my painting Image Of Chair (Father), where I painted my father sitting on an actual chair -- that was my first work in mixed-media. I try to challenge myself, to differentiate myself from other 3D artists. It's tough because the layers are harder to match up for it to look like there's an actual person sitting there."

Though they have a certain credibility in Thailand, Uttaporn's works have been more in-demand abroad. He's been exhibited in galleries like the Bill Lowe Gallery in Los Angeles and the Craig Scott Gallery in Toronto in 2007, Sotheby's Gallery in Hong Kong in 2013, Yavuz Gallery in Singapore in 2014, and Art Stage Singapore in 2015. He's been featured on art websites such as Art People's Gallery, Design Father and Bored Panda.

Uttaporn, like other local artists, still feels like he's received little recognition in Thailand, especially given that he's one out of 21 artists to have won the Artist of Distinction honour by the National Exhibition of Art. He's been working as a full-time professor at King Mongkut's Institute of Technology Ladkrabang in order to support himself, knowing full well that his artworks can't support him financially here.

"I don't want to lie to people and say that Thailand is a country where art is flourishing. It's not true," he says. "I got the Artist of Distinction title and I can't even sell my paintings to survive." So the sudden attention he received in international media earlier this month caught him off guard.

"It feels worth it now," he says. "I've worked so hard. I've gotten all these big awards from entering competitions, but the Thai market is blocked. I'm given such little credit." It's a sad reality that local artists still start to get attention only once their works "go inter" first.

"I'm proud that I received attention from abroad first," he says. "Now Thai people are starting to know me." His goal is to get his work abroad in hopes that he won't have to support himself as a professor for the rest of his life.

"Success, to me, will come the moment I'm able to create my art with my ideas, and it can support me 100%," he says. "If I can be a full-time professional artist, I think I'll be satisfied. That would be wonderful.

"I want to walk on my own and have people see there is a path that doesn't involve depending on government or art organisations. It's been 15 years, and I'm just now starting to feel that the general public is getting to know me. I'm starting to walk now. I might not be strong, but I just have to keep improving -- for foreigners to see my potential and also to see Thais' potential. So far, I've only taken half a step forward."