published : 9 May 2016 at 04:30
newspaper section: Life
writer: Melalin Mahavongtrakul
A touch to transform ancient symbols to digital imagery at the 'Story Of The Time When Gods Were Everywhere'.

Sensory light and instrumental melodies greet us as we lift each black curtain to see projections of blooming flowers, flowing sea waves and crows. As we continue to navigate along the dark hallway, we come out in a playground filled with sea creatures, light balls, transforming hieroglyphics and more. Bangkok's brand-new playground -- teamLab IsLands: Dance! Art Museum, Learn & Play! Interactive Theme Park -- is set to enthral its young visitors and the whole family through interactivity and co-creation.

TeamLab IsLands is an art-and-technology exhibition that comes in the form of an interactive theme park. It has been showcased in Tokyo and Silicon Valley, with a permanent exhibition in Singapore. Over 460,000 visitors joined in the fun when the exhibition was unveiled in Tokyo last year. Bangkok now marks its fourth destination.

"Digital technology will be everywhere in the future. So here, the technology becomes both the material and platform for our artworks. We aim to show that digital technology can extend the beauty of art itself. Possibilities of digital art are practically endless," said Takashi Kudo, communications director of teamLab Inc. "We want to give the children a playground that can best reflect the future."

The Bangkok exhibition, which is now at CentralWorld, features five digital installations and eight creative activities -- a fusion between arts, science and technology -- that allows visitors to express their limitless creation in a collaborative atmosphere.

Upon entry, visitors are taken into the first area that houses Flowers And People, Cannot Be Controlled But Live Together -- A Whole Year Per Hour, a digital art installation that is ever changing by people's presence. The flower's life cycle in a year is shortened into an hour, and our proximity to the work causes the flowers to bloom and wilt away in a continuous motion that aims to reflect how human actions affect the environment.

"You can accelerate the process. You can kill and create. In the end, you -- the spectator -- become a part of the artwork itself and help creating a beautiful existence for others," said Kudo.

Educating young minds about environmental awareness is one recurring theme of the exhibition. Another installation, 100 Years Sea Animation Diorama, sees a 10-minute visualisation of the rising sea levels over a century due to climate change. This prediction of the sea levels -- from 2009 to 2109 -- is based on the data from the World Wildlife Foundation.

Following the art space is the youngsters' favourite: a playground that allows them to draw, jump, touch and play to their heart's desire. There's a "Light Ball Orchestra" where visitors can touch the ball to change its colour. Each ball produces a different sound. With a group playing together, an ensemble of light and music is made.

Children who love colouring would enjoy both Sketch Aquarium and Sketch Town where their own artworks are scanned and projected onto the wall. It is awe-inspiring to see fish and squid the kids carefully coloured come to life with all other virtual sea creatures.

For a game of interaction, Story Of The Time When Gods Were Everywhere gives a space for visitors to create their own story by touching on the hieroglyphics being projected on the wall. With a touch, the flowing symbols transform into the images they represent -- from trees and fires to animals. The characters then interact with and influence one another. For example, a touch on both the characters of fire and tree can produce a burning tree, while a wolf that strays near it will run away when the tree starts to catch fire.

While it's also fun to play alone, the activities are all the more interesting to play with other people. Co-creation is one of the main skills children can learn here, according to the founder of teamLab Inc., Toshiyuki Inoko, who believes the collaborative creativity will be the basis of living and working in the future.

Inoko feels that humans are creative by nature. However, they are being limited by the current education system which mostly dictates that there is only one correct answer and all other answers are wrong. Free thinking is, at times, discouraged. And it makes people afraid of making mistakes, and hence they lose the natural creativity they were born with.

"In society and in practice, there is never just one correct answer," said the founder. "Co-creativity involves the interaction of various people and skills without any clear boundaries between them. As a result, it overcomes the problem of seeing only one right and one wrong answer.

"Humans learn about the world through interaction with others and by sharing experiences. Much of human society has developed through creative achievements born from collaboration and team play."

So far, the teamLab IsLands exhibition has been garnering good feedback from Thai parents. Though the place only opened at the start of this month, Yuthakarn Wattanajang -- a 40-year-old businessman -- has already taken his son Vann, five, there twice. He feels the price of 350 baht per ticket is worth it.

"It's better than going to the arcade where you just put your 10 baht coin in and waste time on games," Yuthakarn said. "With games, there's winning and losing. Kids would just focus on beating it and get stressed. They also lose their temper in the process. But with activities like these, kids can play and develop their mind and body continuously."

While his son plays, Yuthakarn sits nearby and watches. He doesn't interfere or hover, and lets his son play as much as he likes before leaving the exhibition. Other places he likes to take his son are waterparks, or just any place where the boy can either play creatively or exercise.

Housewife Petchsamorn Worasingha, 46, was also at the exhibition on the same day with her nine-year-old daughter Suthisara. The pair spent two hours inside the exhibition. While the family enjoyed themselves, Petchsamorn felt there should be four or five more activities for children.

Like Yuthakarn, the mother agrees that she doesn't want her kid to just play around aimlessly.

"I took my daughter to the Children's Discovery Museum in Chatuchak before. She really likes it there. In the mall, we would go to Kidzania at Siam Paragon quite often," said Petchsamorn. "Still, I feel that there's just not that many places for children to play creatively in Bangkok. There should be more, especially for outdoor activities, like Suan Rod Fai [Railway Park in Chatuchak district]. We need more playgrounds for children around here." 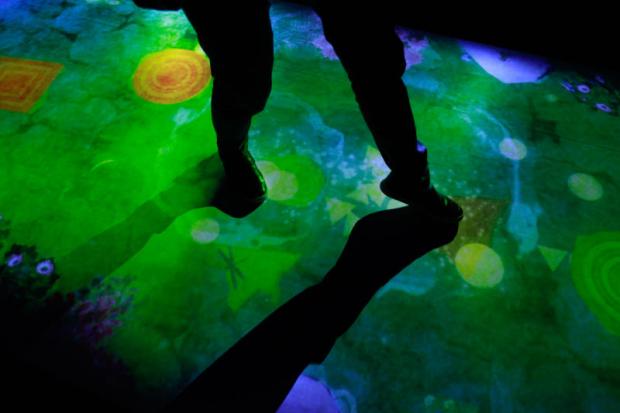 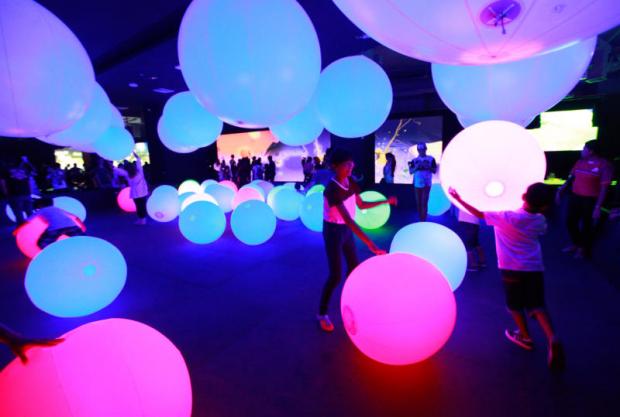 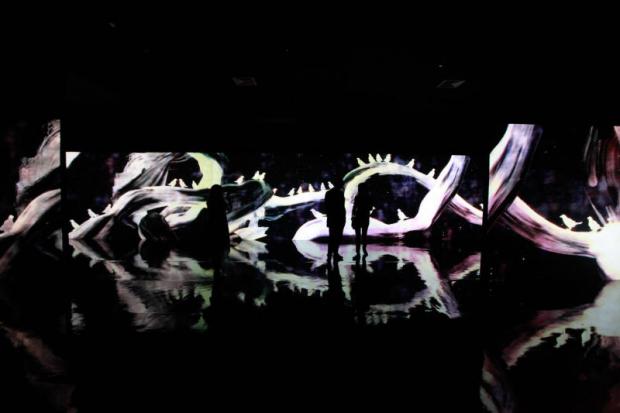 A play of perspective with the three-legged crow.