One of the topics that has gained a lot of public attention this week is the cabinet's decision to withdraw Phu Phra Bat Historical Park, in Udon Thani, from final consideration to become a Unesco World Heritage Site.

The decision was made on Tuesday -- only five days before the UN-based World Heritage Committee will kick off its annual meeting on Sunday in Istanbul, Turkey, to decide on new sites and to announce those that are in danger of dropping off the list.

Culture Minister Vira Rojpojchanarat said the decision was based on the suggestion of the National Committee on the Convention for the Protection of the World Cultural and Natural Heritage of Thailand, stating the committee needed more time to revise the paper, prepared by the Fine Arts Department. 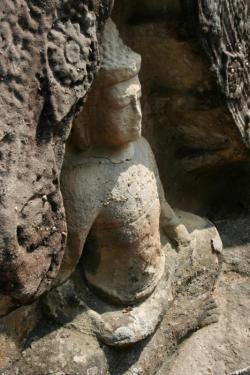 Evidence of past civilisations.

Phu Phra Bat Historical Park has been on the tentative list since 2004. It took the national committee 10 years to submit the nomination dossier to the World Heritage Committee in January of last year, a month before the expiration date for being on the tentative list. The dossier described the site's outstanding universal value, besides its outstanding landscape of peculiar rock formations, and that the location bears evidence of a long-lasting civilisation between the Bronze Age and the Dvaravati, Lop Buri and Lan Chang periods, until the present day.

A month after submitting the paper, the historical park was confirmed to have met all of the technical requirements. An evaluation team of the International Council on Monuments and Sites (Icomos), which offers advice to Unesco on World Heritage Sites, reviewed the paper and conducted an on-site assessment between July and September last year.

The final evaluation report was sent to the committee in May. It asked for more academic evidence and stronger research to back up the request to list the historical park as a new World Heritage Site. The Fine Arts Department, which prepared the paper, was concerned its team couldn't make it within a month or two. More time would be needed for further research and revision of the dossier.

The national committee this year asked the cabinet to approve their decision to pull the request. The cabinet gave its approval and agreed with the committee that if it insisted to move on without a complete paper as requested by the evaluation team of Icomos, Phu Phra Bat would not be considered and forever lose its chance to be listed as a World Heritage Site.

Vira said the government has not yet given up. It plans to try again next year.

The Forest Complex might be downgraded during this coming meeting of Unesco World Heritage Committee, and might be on a list of endangered World Heritage Sites if Thailand can't show enough evidence that the government has seriously tackled the illegal phayung (Siamese rosewood) logging problem.

Being listed as a World Heritage Site means the commitment of the government as well as local authorities and communities to watch over the site in order to keep them in good condition. The concern has been raised. Let's keep our fingers crossed.