From the streets to the classroom
Life
Social & Lifestyle

From the streets to the classroom

Hub Saidek shelter is offering hope to those forgotten by society

Running away from home before completing their primary education, Patcharin, Ice and Ralph* have lived most of their young lives on the streets. Like many others, they made Hua Lamphong train station their home.

Their lack of education has made them sitting ducks to both physical and verbal abuse at the hands of authorities and predatory people, sharing a fate with thousands of others like them.

It was only after they were befriended by social workers from Hub Saidek, a shelter offering support to homeless and disadvantaged children and young adults, that the opportunity to seriously turn their lives around by completing their education informally (kor sor nor) became a reality.

After two years of discipline and perseverance, not to mention encouragement from social workers from Hub Saidek, seven homeless teenagers and young adults have completed their education this past school year. Patcharin, 18, and Ralph, 17, completed their sixth grade certificate while Ice, 26, passed her ninth grade.

Reaching this milestone has empowered them to seek a future of hope.

An orphan, Patcharin left home at 11 because she didn't want to be a financial burden on her grandmother, who scavenged for a livelihood. She is candid about the fact that to support herself she became a prostitute.

Today, living with her two children and husband, she continues to be one because it pays the bills, said Patcharin, devoid of emotion.

A fourth grade dropout, she tried to complete her primary education prior to going to Hub Saidek but failed because there was no one to counsel and tutor her.

"My friends who attended tutoring classes at Hub told me that they enjoyed the lessons. As I have two children and a husband to look after, my visits to the shelter had become less frequent. 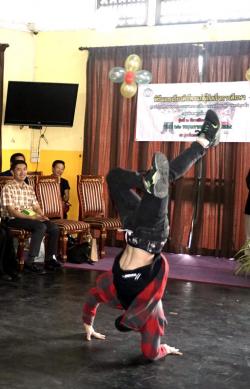 This homeless boy shows off his talent at the graduation ceremony. Hub Saidek outreach center

"After attending the first class, I found that the teachers made the lessons easy for us to understand. Also they were very patient. It took me two years to finish my primary education.

"My next goal is to complete my ninth grade and than eventually get my high school diploma." Patcharin is completing her education, not so much for a career but so her two boys will be proud of her.

"A shout out to anyone who hasn't completed their education -- it's never too late to start from where you left off," she said. Her plan is to one day own a som tam business. To do this, she admits that she will continue to work as a prostitute up until she is able to collect enough to invest in the business endeavour.

"My husband's pay as a labourer is not enough, so I have to continue doing this. There have been people who want to help me invest in my business but I want to make it happen on my own." Patcharin admits that if she had the opportunity to change the past she would have never left home. Apart from that, she has no regrets.

"As a mother, I would like to tell parents to be more emotionally connected with their children, so they will not contemplate running away form home," she said.

Seventeen-year-old Ralph, a nickname his father game him, had a similar story to tell. Spending his childhood in poverty, he ran away from home when he was just nine. He was often beaten and chased away by authorities for being a nuisance. Eating leftover food and joining a gang that would protect him from being bullied by others, Ralph somehow survived the harsh reality of modern Bangkok.

Shortly afterwards, he began to frequent Hub Saidek shelter in the hope that he would be able to wash his clothes, shower and have a hot meal. It turned out to be an opportunity to further his education. He completed his sixth grade certificate with a GPA of 3.75.

"I feel really good about myself," he said, though he admits that old habits die hard.

"I am finding it difficult to set my priorities. I realise the importance of education. It will help me get a good job so that I can look after the family I hope to have one day. However, my years of being on the streets is pulling me back towards my old ways.

"Social workers have been encouraging me to keep my focus on my next goal, which is to complete my ninth grade education. I am learning not to depend on how I feel and be more focused on being disciplined. My goal in life is to complete my high school diploma."

Eldest among the seven that graduated is Ice, a 26-year-old homeless woman who left home a decade ago because of a rift she had with her family.

"I am proud to beat the odds to pass my ninth grade certificate, now I can use this to find employment," she said.

Her journey towards getting an education has been strewn with lapses of poor judgement that nearly sent her to jail.

"I used to skip class a lot and also encourage other students to bunk classes at the start of the term. We used to go and sniff glue in the market. People reported us to the police when they saw our behaviour. There was this one time that I was nearly caught by the police because I had evidence on me. Luckily, I got rid of it in time.

"People used to say I was a lost cause. I wanted to prove them wrong so I began to discipline myself by not hanging out with friends who would lead me astray."

Before Ice was befriended by social workers from the Hub Saidek five years ago, she lived a reckless life. She became a petty thief to survive.

Fending for herself was never easy -- she was often physically abused because of her vulnerability.

"Social workers played an instrumental role in getting my life in order," she remarked.

"They encouraged me to not just continue my education but also taught me vocational skills. I know how to bake. My dream job is to become a chef or a chef's assistant. I hope my education will help me towards that." 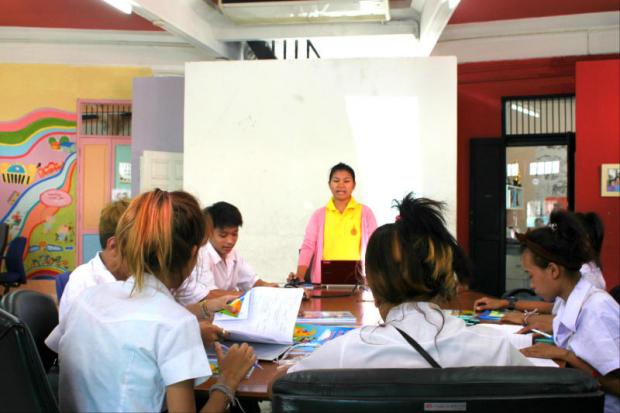