How often is it that international LGBT films get a screening in Thailand? Not often at all, except when there's a film festival. This week, wonderfully strange as it may be, we're seeing not just one but two LGBT films on our silver screens. And the two couldn't be more different. 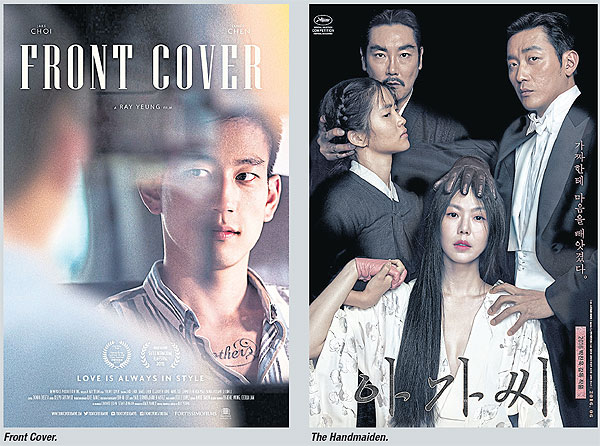 Our first contender landing in is Front Cover, written and directed by Ray Yeung (Cut Sleeve Boys). Korean-American actor Jake Choi plays Ryan, an openly gay fashion stylist who's living it up in the Big Apple. Enter Ning (James Chen), a movie star from China who becomes Ryan's latest styling subject. Cultural identity and ethnicity clash. Ryan is very disconnected with his Chinese ancestry, while Ning demands someone who's Chinese enough for the job. Also enter Ryan's parents who seem okay with their son being gay. And they mistake Ning for their boy's new beau, to which Ning decides to play along with. Needless to say, the two men later develop romantic feelings for one another.

This romantic dramedy opened for the Hong Kong Lesbian and Gay Film Festival last year, and has made its way to different festivals around the globe. It's now seeing its US city premieres, and will head to Vancouver Queer Film Festival later this week.

From modern NYC, we transport ourselves back to 1930s Korea under Japanese colonialism in Park Chan-wook (Oldeuboi or Oldboy's) latest work Ah-ga-ssi (The Handmaiden). A pickpocket Sook-hee (Kim Tae-ri) poses as a handmaiden to the heiress Lady Hideko (Kim Min-hee) in order to aid Count Fujiwara (Ha Jung-woo)'s seduction towards her lady. But it's all a game of deceptions. Fujiwara is not after the lady's heart, but rather her fortune. His plan for the money is however, foiled by an unexpected turn of events as the lady and her handmaiden fall in love.

It's like two opposite ends of the spectrum collide. While one is a lighter tale of fashion, flairs and cultural hiccups, another gives an uncomfortable feeling that no one is to be trusted. The tone and style of the two films vary a great deal and that should satisfy different types of audiences. Do you seek romance, drama, humour or anything just to take some time off of catching Pokémon? There is definitely something for everyone.

As with many other LGBT films before it, Front Cover and Ah-ga-ssi are seeing a limited release, only showing at a few selected cinemas. While it shouldn't be a problem for Bangkokians, it's a nuisance for anyone living outside the capital as they need to travel far and wide just to see movies other than those of mainstream Hollywood stints. Make haste wherever you are. The films will most likely not be here for long.

and Ah-ga-ssi (The Handmaiden) are being screened at SF World Cinema at CentralWorld, Lido, Esplanade Ratchadapisek and House RCA.
Do you like the content of this article?
COMMENT