These installations throughout Bangkok show just how thoughtful art can be

Entang Wiharso, Geraldine Javier, Zeng Fanzhi, Zhao Zhao -- I've Googled them, and yes, they are all huge in the contemporary art world.

The buzz around the opening of Tang Contemporary Art's new exhibition last week, then, was not unexpected but that's not just it. The show, entitled "Northern Land, Southern Seas", also features works by heavyweights like Ai Weiwei, Huang Yongping, Rirkrit Tiravanija, Apichatpong Weerasethakul and Korakrit Arunanondchai, and this is to celebrate the gallery's move from the Silom Galleria to its new home at Golden Place Plaza on Ratchadamri Road.

So congratulations to the gallery on its new chapter. Huang Yongping's Double Wing is now hung majestically in the centre of the space while Rirkrit's video installation shows a pot being dragged through a rural landscape with his famous curry being slowly cooked on the move, and you'll hear Korakrit's voice philosophising on painting and denim in the adjacent room.

Five interactive works await, the artist writing that they are about "the distance that is created between a work and its audience". On entering the space, the audience faces Into The Wind, a large transparent box with shreds of cotton inside and a separate, small box a few steps away. Visitors are invited to blow at a bar inside the little box, and, if the wind is strong enough, the shreds of cotton start whirling in the cube. Another piece is of the same series and functions similarly, but this time the cube emits a train of bubbles.

Witaya explained that each work reaches back to the analogue era when direct physical force operated the device, yet the technology in each work doesn't necessarily perform its original function. This is where his work differs from much of the "interactive art" out there, in that it's not just about the audience's making something move and suddenly it's interactive and all is great. With Train Machine, for instance, the audience actually takes part in telling the artist's story. By winding up the toy train, the projector starts screening a moving landscape onto the wall as if one is looking out from a train.

The show is most poignant with Death Data, a project Witaya links directly with thairsc.com, the Thai Road Safety Collaboration's real-time report of road casualties and accidents in Thailand. His work is a tab attached with a series of matches, the set mechanism lighting up a match every time someone dies from a road crash. With this piece, it's no longer interaction for entertainment or to tell a personal story, but bringing a grave public issue into a space otherwise distant from everyday human tragedy.

Over at Bangkok University Gallery, with Signaporean Ang Song Nian's show "As They Grow Older And Wiser", it's also about the transferring of "other space", but with a lighter touch.

Seven large photographs of dense trees on all walls instantly transport the audience to some tranquil tropical forest. On closer inspection, however, one would start noticing foreign objects -- ropes, a concrete pot, metal structures -- lurking in the corners. The artist is actually referring to his own country, Singapore, where every natural site seems to be man-made or heavily controlled by humans. For the period of time spent in residency in Bangkok, Ang Song Nian had noted something similar here -- for example, the framing structures for trees along the roads.

This point is doubly underlined with a set of installations in the centre of the space -- whether layers of patches of grass, metal structures for controlling a tree's growth or a large concrete tree pot.

The fact that all these objects have been arranged in cubes and in perfect order has given the space a highly manufactured feel. It's only at this point, looking back at all the photographs on the walls, that we realise that all the lushness and tranquillity enveloping us at the beginning is just a trick. Even the trees in these images are strictly constrained within very photographic frames. 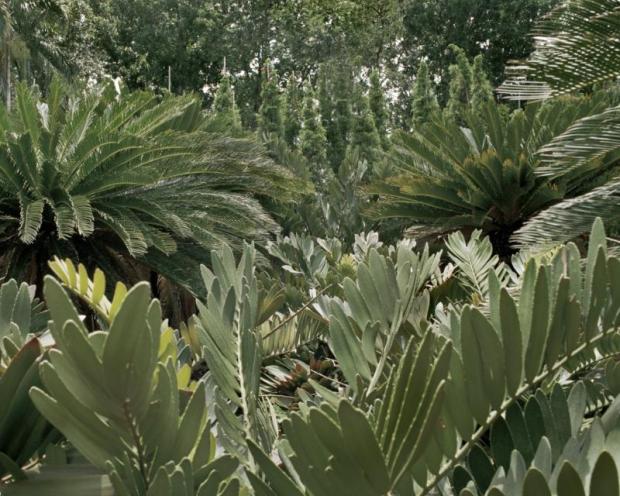