Since Oct 14, one day after the passing of His Majesty King Bhumibol Adulyadej, the sounds of conch shells, bugles, pipes and drum beats, followed by the melancholic tones of classical music, have been heard from the Grand Palace six times a day. Each session lasts about 15 minutes and often makes many mourners nationwide burst into tears. This royal tradition is called prakhom yumyam.

"Prakhom is a way to honour and pay respect to royals and is also a tradition," said Anek Artmangkorn, acting director of the Fine Arts Department's Office of Performing Art.

Prakhom music is played together with the Royal Household Bureau's yumyam band. The yumyam tradition has been continually performed since the Ayutthaya Period and was added to the piphart band in the reign of King Rama V, he added.

The office deploys each of its five bands of musicians to perform at the royal funeral of His Majesty King Bhumibol Adulyadej every day on rotation. All the musicians will continue to work from 6am-9pm every day until the royal funeral reaches its 100th day. Each session starts at 6am, 9am, noon, 3pm and 9pm. Prakhom yumyam was played at previous royal funerals, starting with Her Majesty Queen Rambhai Barni of King Rama VII in 1985 to that of the Princess Mother, HRH Princess Galyani Vadhana and HRH Princess Bejraratana.

By definition, prakhom means playing music as a signal in a ceremony to honour or pay respect to someone. Yum means repeated drum or gong beats to tell the time for changing guards. Yam means each of the eight quarters of the day. Each yam lasts for three hours.

According to an article by the Office of Performing Art, prakhom yumyam is the playing of music to pay respect and tell the time for officials to work every three hours starting from 6am-3am. The centuries-old tradition has been adjusted to fit the current situation.

Music in royal ceremonies is considered one of the royal insignia for monarchs and members of the royal family. Thai classical music is an important component of each royal ceremony and must be played at the right time, together with a band of the royal paraphernalia section under the Royal Household Bureau's Royal Ceremonial Affairs Division.

The Royal Household Bureau's prakhom band can be divided into two small types. The first one is called Conch Shell and Siamese Bugle Band with conch shells, Siamese bugles and megaphone-shaped trumpets. The second one is the Chanai Pipe and Chana Drum Band with one chanai pipe (two pipers at work on rotation), one poeng mang drum and a number of gold-laden red chana drums.

What is special about this royal funeral is that two bronze drums are added to the prakhom band.

"The royal tradition requires the use of bronze drums in playing the music for a king only. This time, the band consists of two bronze drums, four conch shells, 10 Siamese bugles, 10 megaphone-shaped trumpets, 40 gold-laden red chana drums, two chanai pipes and one poeng mang drum," Wethin Wichaikhatkha, head of the band and also chief of the division's royal paraphernalia section, said.

According to him, the number of musical instruments differs according to the ranks of royals as required by the centuries-old tradition. 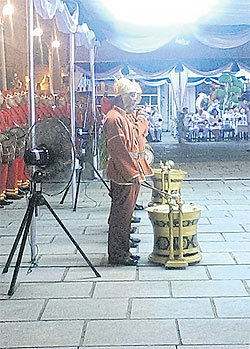 Members of the band are mostly the section's 38 musicians who work daily on rotation and army musicians from the 11th Military Circle who beat the chana drums. The Royal Household Bureau's musicians are dressed in red traditional costumes which are similar for both auspicious occasions and funerals.

"We are deeply sad. We did not want to see His Majesty the King leave this world. We thought we would be able to celebrate his birthday on Dec 5. We were shocked and not prepared for this sad news. However, we must perform our duty. We must play the music until the 100th day of the royal funeral, then stop and wait until the completion of the royal crematorium," the band leader, with over 40 years of working experience, noted.

Anan Sri-ra-udom, a poeng mang drummer who has been working for the band for seven years, said he performs his duty to his fullest capacity to serve the royals.

In the past, the Piphart Nang Hong bands performed at commoners' funerals only. Since the reign of King Rama V, such bands have been added to royal funerals.

In addition, HRH Princess Maha Chakri Sirindhorn had a royal initiative for the piphart band to play a series of 14 Thai classical songs named ching phra chan while Buddhist monks were having breakfast, starting from Jan 7, 2008, for 100 days.

In 2011, both bands performed six times a day -- at 6am, noon, 3pm, 6pm, 9pm and midnight -- for 100 days. Also while monks were having breakfast, the piphart band played a series of Thai classical songs named ching phra chan chao.

Anucha Boriphan, senior artist and assistant chief of the office's Thai classical bands, said: "I performed for most of the previous royal funerals and have been doing the task for the royal funeral of His Majesty King Bhumibol Adulyadej. I feel it is a great honour for myself, my agency and family to serve the royal family."

The art is passed on from one generation to another and the same songs have been used according to the practices of the Entertainment Department, which was in operation in the Sixth Reign and has become the Fine Arts Department.

According to Suriya Chidthoum, chief of the Fine Arts Department's Piphart Nang Hong Band, the performance is special due to the use of mother-of-pearl and ivory musical instruments bearing His Majesty King Bhumibol's royal emblem. This set of instruments is used for the first time now after the Fine Arts Department's production to celebrate the 60th anniversary of the King's accession to the throne 10 years ago.

This band for the King is called Piphart Khruang Yai with the additional two xylophones -- ranad ek lek and ranad thoom lek. In the previous royal funerals for the late princesses, a smaller band called piphart khruang khoo was used.

He recalled that he felt numb and did not know what to do when he first heard of the sad news. According to him, all the band members were very sad and unable to concentrate at first.

"All of us feel it is a great honour to serve His Majesty King Bhumibol Adulyadej for the last time. We love and are loyal to all the royal family members. We are grateful to His Majesty the King who had musical talent. All of us would like to express our sad feelings and send his soul to heaven. We did not want him to leave, but must perform our duty. We are deeply sorry and want to serve him the best we can," Suriya noted sadly. 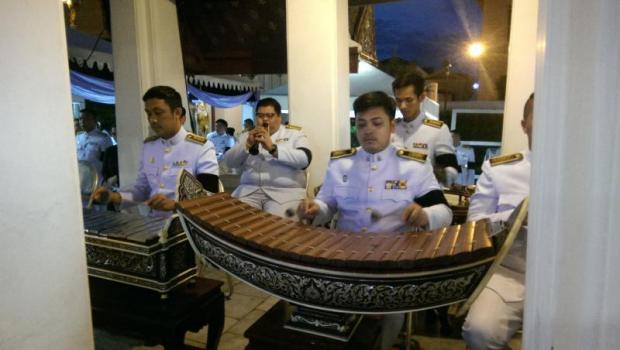 The prakhom yumyam tradition at the royal funeral of His Majesty King Bhumibol Adulyadej at the Grand Palace. Pichaya Svasti