The government plans to address Thailand's woefully inadequate disabled-friendly infrastructure, but whether it will make a real difference for locals and tourists alike is debatable

published : 7 Nov 2016 at 05:00
newspaper section: Life
writer: Karnjana Karnjanatawe
Over 160 donated wheelchairs are available for the disabled and elderly who need to enter the Grand Palace to pay their last respects to His Majesty the King.

Visitors have returned in their droves to the Temple of the Emerald Buddha after it was temporarily closed for two weeks following the passing of His Majesty the King -- Europeans, Chinese and others, many of whom are dressed in dark-coloured clothing. Some of them are also disabled.

Those in wheelchairs can move slowly over steel ramps to get inside the temple grounds. Once they are inside, they will surely notice that the walking surface is not even. They will find it difficult to reach any attractions up close or even to pay respects to the Emerald Buddha image inside the ubosot because there are no raised platforms for wheelchairs. There is no slope to help them admire the world's longest mural depicting the Ramayana epic on the compound walls.

The temple is regarded as one of the most popular attractions in Thailand, and it exemplifies the typical deficiency of facilities that would ensure access for all visitors, able-bodied or otherwise.

The real situation is in contrast to the goal of the government to promote "Tourism for All", as announced by Prime Minister Prayut Chan-o-cha on Word Tourism Day in September. In his keynote speech, the PM stressed that tourism is a "right for all" and the government would prioritise promoting freedom for people with disabilities. The goal is part of the government's policy to drive Thailand to become a developed country in the next 20 years.

"Accessibility for all will benefit not only people with disabilities, but also the elderly and families with small children. They have the right to travel and the government have policies, laws and measures to ensure a better livelihood of people with disabilities, covering not just physically disabled people, but also others who have sight or hearing impairments, the elderly or anyone with special needs," he said.

According to the statistics of the Social Development and Human Security Ministry, there are about 1.6 million Thai people who have some form of disability, accounting for 2.4% of the total population of 68 million people. Almost half (48%) are physically handicapped, followed by those who have a hearing impairment (18%), visual impairment (11%), mental disorder (7%), are intellectually challenged (7%) or have autism (0.54%). Meanwhile, 15% of international tourists are elderly or disabled, according to the Ministry of Tourism and Sports, and Thailand has a duty to ensure that they have an equal opportunity to travel.

The tourism for all concept is paramount at a time when the industry accounts for a large portion of the country's revenue.

"If the full score is 10, Thailand would get about five," said Assoc Prof Trirat Jarutach, chief of the Universal Design Research Unit of the Architecture Faculty of Chulalongkorn University.

Accessibility for all should cover the design and composition of an environment that can be accessed, understood and used by all people regardless of their age, size, ability or disability.

During the past decade, Trirat's research unit has conducted field research, providing guidelines as well as helping to improve facilities at many tourist attractions nationwide.

Results from its latest research for the Tourism Department last year, which involved surveying 87 attractions in six provinces featuring 12 hidden gem cities of the Tourism and Sports Ministry, were not impressive. All of the attractions did not pass the evaluation. The highest score achieved was 18.5 out of 52 points. Only three attractions got this score, which is still less than half.

"The quicker we can improve facilities, the better," said Trirat. "Thailand is becoming an ageing society, where the senior population will double from the present 10% to 20% in the next five years. Accessibility for all will benefit everyone."

In addition to having facilities in tourist attractions, modified public transportation is another factor to ensure accessible tourism.

Public buses, boats, trains and inter-provincial buses are still far from universally accessible. Even the modern BTS Skytrain needs to improve as some stations do not have elevators.

Kanokthip, in her 30s and a regular BTS passenger, said when she accidentally hurt her right knee and had to wear a splint for three months, just standing on the first step was quite difficult for her while using a crutch.

Walking up the 40 steps from the ticket counter to the train platform "was more than a nightmare".

A study by Silpakorn University on "Travelling of Physically Disabled in Thailand" in 2011 found that handicapped people need to crawl up steps of an inter-provincial bus if no one offers a hand. Some low-cost airlines do not offer assistance to people with disabilities, while some airports do not have passenger ramps.

On trains, the doors are not wide enough for a wheelchair. The State Railway of Thailand (SRT) argues that it has special air-con passenger carriages designed for the disabled. The reality is that these are not available on every route.

The government pins its hopes, perhaps, on new train carriages, which will officially be launched on Friday. The SRT invested 4.7 billion baht to purchase 115 carriages, including nine carriages with facilities to support people with disabilities. The government also plans to launch 489 new disabled-friendly public buses with low floors by the end of the year.

But the blind still need help from other commuters to tell them the approaching bus numbers and guide them to the door.

Accessibility for all covers two basic factors -- infrastructure and equipment, said Prof Wiriya Namsiripongpun, 64, law lecturer at Thammasat University and president and founder of the Universal Foundation for Persons with Disabilities. He became blind after an accident involving a dynamite explosion when he was 15-years-old.

"Many things have been improved when compared to the past, but there are still more works needed to be done, including information accessibility," he said.

The Persons with Disabilities Empowerment Act BE 2550 (2007) states in Section 20 (6) that information provided by the public or private sector must support all types of disabilities. But even government websites are not designed to support software for the blind.

Educational institutes allow students with disabilities to study, but the facilities are not adequate, such as the lack of slopes, educational tools and Braille books. Even Parliament House is not a good example.

"Whenever I attend meetings there, there are no Braille papers. Someone has to read the information for me," Prof Wiriya said.

The Council of Disabled People of Thailand has studied the draft and will compare it to laws of other countries before the Act will be finalised, which is expected to be soon, he said.

"If there are facilities for everyone, it will benefit not only people with disabilities, but also older people. They can still go out, travel, work or enjoy their lives. We all need activities to stay sharp. The sooner we can offer accessibility for all, the better," he said.

Whether Thailand can achieve universal accessibility, however, remains an open question. 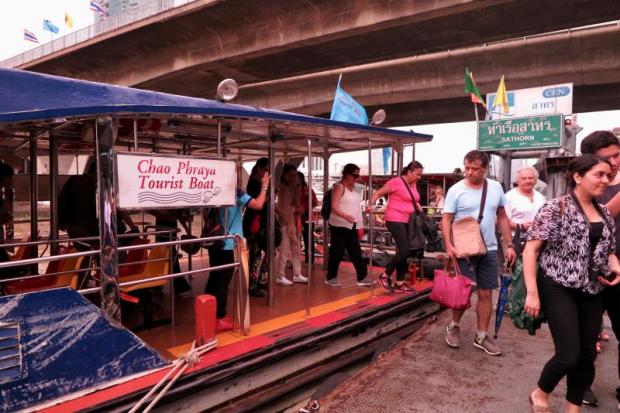 There is no ramp for ferry passengers on the Chao Phraya. Staff say they can offer to help lift a wheelchair instead. 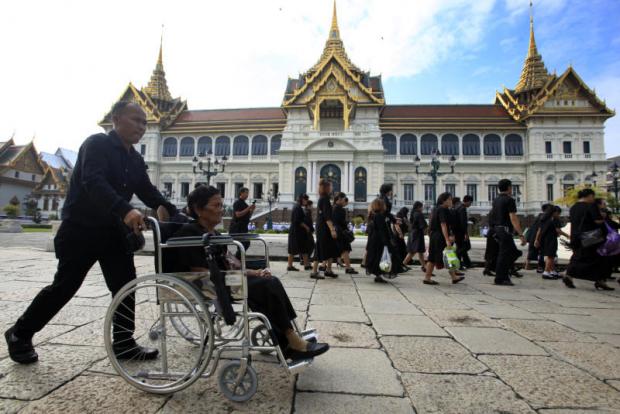 Mourners including an elderly woman in a wheelchair queuing at the entrance of the Dusit Maha Prasat Throne Hall. 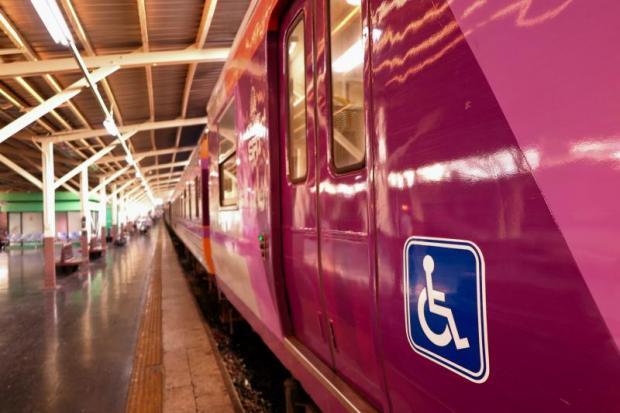 A train carriage with a lift for those in wheelchairs, but the facility is very limited.