published : 6 Dec 2016 at 04:00
newspaper section: Life
writer: Katie Jewett
Elusive and endangered, fishing cats are rarely seen, even by the scientists who study them. Camera traps are invaluable tools for understanding their distribution. Photos: Morgan Heim

Under the watchful eye of a local conservation biologist, the world's only wetland cat ekes out a strange existence in some of Southeast Asia's most heavily fragmented habitats.

Deep within a freshwater marsh in southeastern Thailand, a camera sits inconspicuously beneath a star-studded sky. At the slightest hint of movement -- a paw squishing into thick mud, a curious nose nudging a piece of bait -- the shutter clicks amid the resounding chorus of frogs. Only the forest of grasses surrounding the clearing bears witness as the flash exposes its elusive subject for a brief moment.

Passanan "Namfon" Cutter had waited almost five years for one of her camera traps to trigger at a moment like this. But she didn't actually know what she had captured until she and her team followed a machete-slashed path back into the marsh at first light to retrieve the film and develop it back in town.

"When I realised we had gotten the picture, I almost had a heart attack," says Passanan, a conservation biologist who for more than a decade has pieced together a meagre research budget from any funding source she can find. "I nearly jumped to kiss the person who handed me the picture album in the shop." 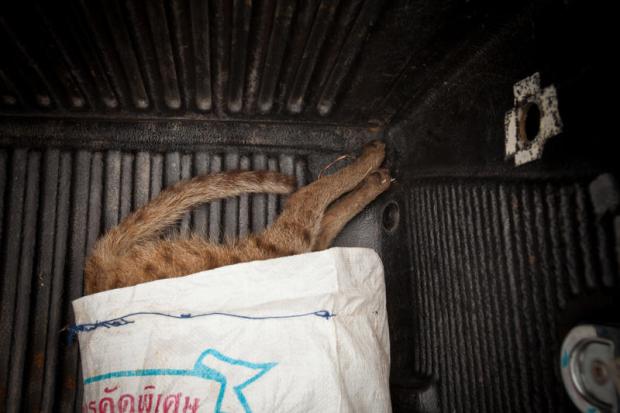 Passanan's team encountered this dead fishing cat on a roadside and tucked it into a rice bag to transport it to a necropsy. The procedure later revealed a bullet wound,indicating that this was likely a retribution killing. photo: photographer

That fateful photograph, which was captured nearly 10 years ago, marked a turning point for Passanan's research -- and for the conservation of one of the rarest cats on the planet. The picture proved, for the first time, that a mysterious feline known as the fishing cat (sua pla in Thai, or Prionailurus viverrinus) was present in Thailand.

Across Southeast Asia, very little is known about fishing cats in the wild, and -- while everyone agrees there aren't many of them left on the planet -- no one can pinpoint exactly where the remaining cats roam. But since Passanan captured her first camera-trap photo of these charismatic cats and launched a landmark study to gather data about their distribution and behaviour, a clearer picture is beginning to emerge -- one that is helping scientists to ensure the against-all-odds survival of this wetland warrior.

Despite a superficial resemblance to common house cats, fishing cats differ from their couch- and windowsill-dwelling relatives in a number of ways. The wild felines are slightly larger (males can be the size of a cocker spaniel), and their short, clipped growls almost sound like barks. But the most obvious difference is probably their unique relationship with water. Unlike house cats, fishing cats love the water -- and their survival is inextricably tied to it. 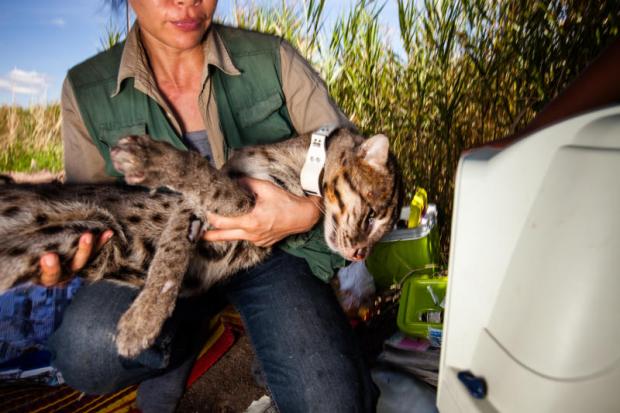 After radio collaring and performing health checks, Namfon transfers a slumbering fishing cat to the 'recovery' room so it can fully awaken from sedation before its release. photo: photographer

As their common name implies, fishing cats (the Thai name sua pla literally means "tiger fish") prey mostly on freshwater fish and other marine invertebrates. They tend to fish mostly from the banks, sitting patiently at the water's edge and waiting for an opportune moment to snare fish with their non-retractable claws. But the cats are also well-adapted swimmers. They use their short tails like a rudder to steer a course through the water, and a dense layer of fur close to their skin helps to keep water from penetrating while they paddle.

Their strong affinity with wetland prey and coastal habitats -- from inland floodplains and deltas to coastal mangroves and wetlands -- has allowed fishing cats to fill a specific ecological niche and avoid competition with other predators, including larger cats like leopards and tigers. It has also made them incredibly difficult to locate and study.

"You're not going to find fishing cats distributed across a landscape the way you would leopards," says Dr Anthony Giordano, a carnivore ecologist and conservation biologist. He points out that the patchy, discontinuous distribution of fishing cats is no coincidence given their close association with equally patchy wetland habitats. "They are truly the only obligatory wetland cats."

Giordano leads the Society for the Preservation of Endangered Carnivores and their International Ecological Study (Species), and over the years he has assessed the status and distribution of fishing-cat populations in Bangladesh and Sri Lanka. "When you look at the big picture, we are still trying to fill in the basic holes as to where fishing cats occur. It would almost be like throwing a dart to the wall: Who knows if fishing cats can be found where that dart lands?"

Historically, fishing-cat distribution is thought to have spanned from the Indus Valley of Pakistan east to Cambodia, and from the high Himalayan foothills south to Java. But unauthenticated, vague and erroneous record keeping has complicated scientists' assumptions as to where this species once thrived, and where it might still hang on today. It now seems likely that fishing cats have been lost from many of these regions, but no one knows for certain. Scientists' best guess is that it's likely no more than a few thousand. 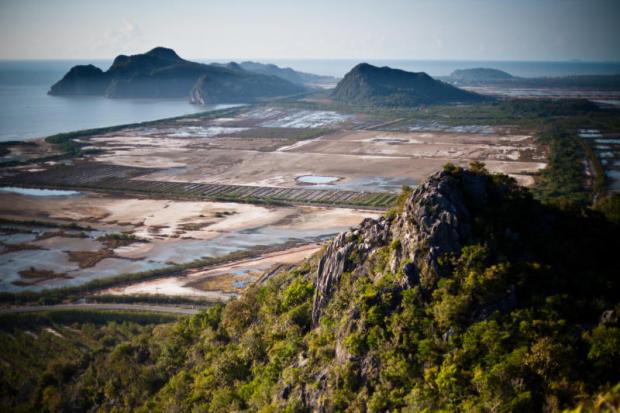 Following her first successful camera-trap capture of a wild fishing cat, Passanan began to spread the word about her search for these animals, which are frequently mistaken for outsize house cats. Then, in 2009, she happened upon a park ranger outside the village of Sam Roi Yot in Phetchaburi province. He invited her over to see a pair of wildcats his son had rescued from a nearby rice paddy. Passanan -- who was already many years into her search -- walked in and laid eyes for the first time on a living, albeit hissing, pair of fishing cats.

"I was happy to see them alive but so sad at the same time," Passanan says, recalling her reaction to seeing the cats in captivity. "After finally locating them, I was just amazed at how they managed to survive in such a changing environment." 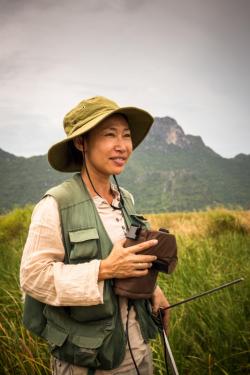 At Khao Sam Roi Yot National Park -- which includes Thailand's largest freshwater marsh -- Passanan was finally able to locate a population of fishing cats large enough to study. At this interface, the coastal wetlands are rapidly being converted into a stamped-out patchwork of commercial aquaculture.

"If you can ignore the shrimp farms, you can just imagine how beautiful this area must have looked before it was all dug up," says Morgan Heim, an American photographer who along with colleague Joanna Nasar joined Passanan and her team in the field on several occasions to document Passanan's Fishing Cat Research and Conservation Project, the first effort designed to conduct an in-depth ecological investigation of fishing cats in Thailand. The team would eventually capture, radio-collar, and camera-trap nearly two dozen individuals, tracking the animals' movements and identifying threats to the species' survival.

Bulldozers and backhoes are dramatically transforming the landscape here. While small-scale subsistence shrimp farming has always been a way of life in the region, major conglomerates have begun leasing land from subsistence farmers. What's driving this rapid landscape transformation? Demand for cheap shrimp. Shrimp is the most popular seafood in the US, and 90% of this product is imported -- the majority of which is farm-raised. Thailand is one of the world's leaders in shrimp exports, feeding this hungry industry by continuing to build more shrimp farms. 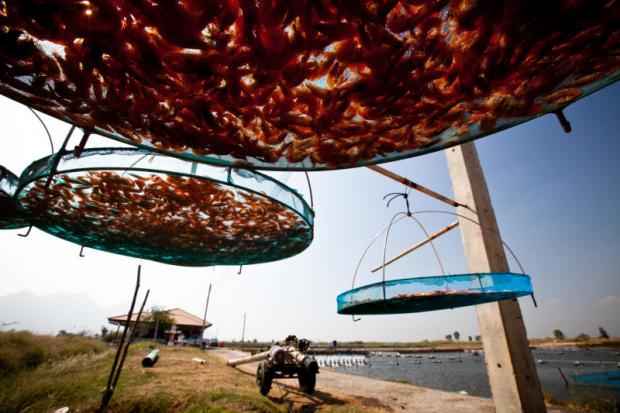 According to Passanan's study, fishing cats in Thailand have proven quite resilient to habitat change, "so long as there are still fish in the ponds and rats in the field".

Given that commercial ponds produce countless tons of translucent shrimp, it's hard to blame the opportunistic felines for seeking out farmed fish in the absence of natural prey. Nevertheless, retribution killings are on the rise as many locals consider fishing cats (when they recognise them as such) a nuisance, even a pest. Giordano points out that ecological studies must now move ahead to look at the "science of conflict": surveying local people on their views about fishing cats to better understand the nature and intensity of the conflicts between them.

In the village of Sam Roi Yot, Passanan can't mention the word "conservation" without being turned away. "People don't understand why we want to protect the cats instead of humans," she says. "To the locals, conservation means we're trying to kick them out to save fishing cats. So we try everything we can without using that one word."

Guardians of the Fishing Cats

In the face of local antipathy, Passanan looked for opportunities to recruit a team of unlikely fishing-cat guardians. Her greatest strides have come, rather surprisingly, through a number of dinnertime conversations. She realised early on that the first step to understanding fishing-cat ecology did not lie in the field, but rather in gaining the trust of villagers whose backyards provided important corridors -- and critical sanctuaries -- for the nightly movements of the endangered felines.

Over several years, Passanan slowly became integrated into the community of Sam Roi Yot, sharing countless meals with families to gain permission to track individual cats through their property. She built chicken coups to prevent fishing-cat predation; she spayed local dogs (the more likely predators of chickens). As Passanan built community rapport, she began broaching the subject of fishing cats to teach about their benefits, taking villagers to look at the contents of their scat. Contrary to local belief, fishing cats prefer to dine on rats, not chickens, helping to control pest populations.

In addition, Passanan has assembled a team of local research assistants, some younger than 10 years old. She has taught them how to track, trap, and radio-collar fishing cats, sometimes offering some of the most dedicated assistants small stipends. She has trained the team to use radio telemetry and GPS equipment to locate collared cats and record their exact locations, and has also shown some team members how to conduct health checks on sedated fishing cats prior to their release.

Passanan's colleagues and local families in Sam Roi Yot have given each individual cat its own name. "After tracking individual cats for a while, you develop a bond with them," she says. "Rip-eared, Khai Toon, Peek Gaa -- they all mean something. People always remember the names and ask after those cats. That's the point."

Now armed with a robust and growing data set about Thailand's fishing cats, Passanan has recently shifted her focus toward education, outreach and collaboration with local schools. Ruj and a local teacher guide students through the maze of marsh grasses to field sites, teaching about the importance of wetlands and mangroves along the way. The link between fishing cats and their wetland habitat remains the single most important life thread for the species.

Meanwhile, the emboldened fishing cats in Thailand have grown accustomed to the camera traps. Framed by marsh grasses and bolstered by no more than a piece of chicken bait and a chorus of mocking frogs, they frequently trigger camera traps beneath star-studded skies. Each time that shutter clicks and reveals a feline subject, it represents a small, triumphant notch on the side of fishing cats in Thailand's game of cat and fish.

"If we see on our camera trap that the cat has survived another day," says Passanan, "it's a relief. It's a day to celebrate."

This story originally appeared in bioGraphic, an online magazine from the California Academy of Sciences that features stories about nature and sustainability. Visit www.biographic.com.