But like old people, after more than 100 years, many of them are dying.

The last rainy season soaked the ground. When the Bangkok Metropolitan Authority (BMA) put sandbags around the trees to facilitate pedestrians crossing puddles, the trees were swamped. It grew more complicated after the passing of King Bhumibol Adulyadej last October, when massive crowds packed Sanam Luang. Since day one, locals with charitable hearts quickly set up volunteer booths to cook and feed those waiting in line, a well-meaning effort that produced some side effects as hot water or waste water was poured onto the ground, not to mention the increasing amount of rubbish.

"Tamarind trees in other areas are big and covered with green leaves. But in Sanam Luang the leaves fall and are sparse. The general overview is that the trees are dilapidated," said Oraya Satabutr of the conservation group Big Trees. "They're dilapidated due to lack of care. They're surviving only by a margin, and if this keeps going they'll keep dying. The fact that they haven't all died already is strange -- but they're resilient trees by nature." 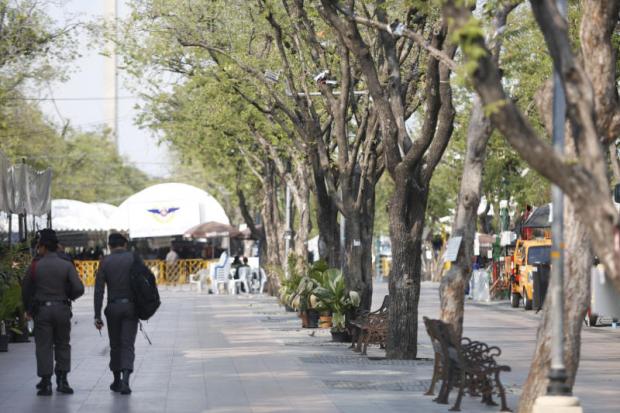 The tamarind trees should be luscious and vibrant, but instead are withered. Photo: Pattarapong Chatpattarasill

An increasing amount of environmentally conscious visitors since November noticed that people were mistreating the land, in turn the park's numerous tamarind trees were rotting. People took to the internet -- posting images of people throwing trash, setting up heavy equipment and pouring waste water, hot water, and even oil onto the tree's roots and soil.

The BMA responded quickly. The authority has since removed the sandbags and urged mourners to not harm the trees. After a survey, they found that out of the 783 tamarind trees planted around Sanam Luang, almost 40 were on the brink of death, while the rest were withering.

Last month the BMA dedicated a team of specialists to plant 37 new tamarind trees and launched a rehabilitation plan for the rest. Meanwhile, civic participation has been active. Big Trees, the conservation group, has been holding talks and activities in order to whip up interest and rally weekend support, bringing in experts from the BMA's Environment Department, the Royal Forest Department and the Faculty of Forestry from Kasetsart University to educate volunteers on how to maintain the trees. 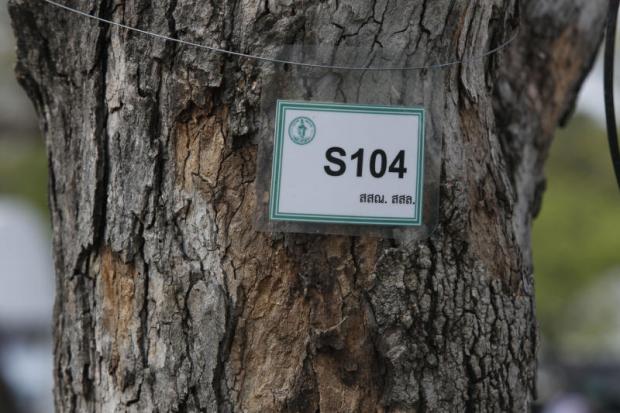 The health of the tamarind trees is a significant historical and environmental issue. Since 1977, Sanam Luang has been listed as a historical site by the Department of Fine Arts. The majority of the trees were planted more than a century ago under orders of King Rama V. He ordered the planting of two rows of trees during his reign, and two more rows were added by the government about 50 years ago.

The history of when exactly the trees were planted remains a mystery, but according to Pornthum Thumwimol, a landscape architect working in the Department of Fine Arts, after expanding, reshaping and renaming the field from Thung Phra Men -- the royal cremation ground -- to Thung Sanam Luang, Rama V was inspired to plant trees around the field after a royal visit to Java, now Indonesia. His first known visit to Java was around 1870.

"In front of the Sultan's palace, they planted trees," Pornthum explained. "At that time, Java was colonised by the Dutch, so the gardens were decorated Dutch-style. His Majesty probably saw that it was beautiful and full of shade, so he decided to plant some as well."

The reason for planting the tamarind tree specifically is due to its meaningful name. In Thai, tamarind is ma-kham, the sound resembling greng-kham, meaning powerful or dignified. The trees, which have stood the test of time and have seen some of the most significant events in Thai history, are so important that they even have their own serial number.

Expert arborists will eventually pass on their knowledge to volunteers. Photo: Apichit Jinakul

"Thais see trees all the time to the point that we sometimes take them for granted," said Pornthum. "The country is naturally green, so we don't see them as something of historical significance."

When Sanam Luang served as the venue for the weekend market 40-50 years ago -- the precursor to the Chatuchak Weekend Market -- vendors would hammer in nails and use the trees as poles, heavy items like cars were parked on the tree's roots, and cement was even poured onto the roots at certain points.

"During that time the condition of the trees was a lot worse," said Pornthum. "Now, people who don't understand and don't love trees pour water and waste onto them, thinking that the tree would like it."

According to Oraya, one of the leaders of Big Trees, the tamarind trees have actually been in horrid condition for years, and what's happening now is only speeding up the decay.

"Big Trees has been working on a project with the BMA for many years already to help restore the trees," she said. "If you noticed, Sanam Luang is extremely hot, and the soil hasn't been maintained. It has no food or nutrients anymore. The soil that we dug out to survey was like clay -- you could make pottery out of it. It traps water, which doesn't go to the roots to get absorbed. When this happens water is trapped on the surface and it makes the tree rot."

Another issue, said Oraya, is that workers who were assigned to prune the trees simply do not understand their nature and modes of survival. Large and important branches that should be left alone are sawn off; only to be left with the small, weak and dry cavity-filled branches that actually causes the tree to become more sick.

Tamarind trees by nature are luscious, strong vibrant, and full of valuable benefits, unlike what we see in Sanam Luang today.

As of now, the team of experts and volunteers that Big Tree rounded up are working to restore all 783 trees by changing the soil and pruning off dead branches -- a task that sounds simple in theory, but is very difficult and time consuming in reality. The tasks must first be done by expert arborists, who will then train BMA staff and volunteers to follow suit. Afterwards, the BMA is then expected to constantly maintain and take care of the trees correctly.

"Last week I was with the staff who take care of the park directly," she said. "They seemed like they were listening and wanted to learn more. I believe that the leftover trees still have hope of reviving."

Boonrit Nimnual, chief of Chatuchak Park who led a team of BMA's tamarind-saving specialists, said in an interview that he believed all the trees would survive, with only eight of them still "in a coma".

Still, the tree restoration may take up to more than a year to complete, and in addition to that, adjustments have to be made for the royal crematorium of King Rama IX. With the crematorium taking up a large amount of space in Sanam Luang, 50 trees in the south side will have to be transplanted to Nong Nooch Tropical Botanical Garden and nurtured there until the ceremony is finished.

Last week, arborists from Nong Nooch Tropical Botanical Garden started the process of digging and boxing up the trees. The transport date is planned for May.

"The trees have to be wrapped for two to three months before they're moved to a new place," explains Oraya. "The plan is that we're going to relocate and nurse the trees. We'll take the tissue from the original trees to breed new trees. There's a plan to transport them back to Sanam Luang, but there are risks. The trees are so old, and if not done properly, not all 50 will come back."

As of now and in the future, the survival of these historic trees are in the hands of Thailand's expert arborists and the knowledge that they're passing onto eager volunteers and government staff.

Talks and activities on maintaining the park's tamarind trees are organised by Big Trees and co-operating institutions every weekend at Thammasat University until Feb 19. Contact Line ID @th-arbor or go to facebook.com/BIGTreesProject for more information.