Weaving a community together

Continuing our female leadership series, Life talks to Sangiam Sawaenglap, who helped turn her rural village in Sukhothai into a model for community-based tourism

Villagers of Ban Na Ton Chan community in Sukhothai's Si Satchanalai district describe Sangiam Sawaenglap as kind, caring and diligent. She is the force behind the success of her village, regarded as a role model of community-based tourism and a well-known eco-tourism destination in the North. 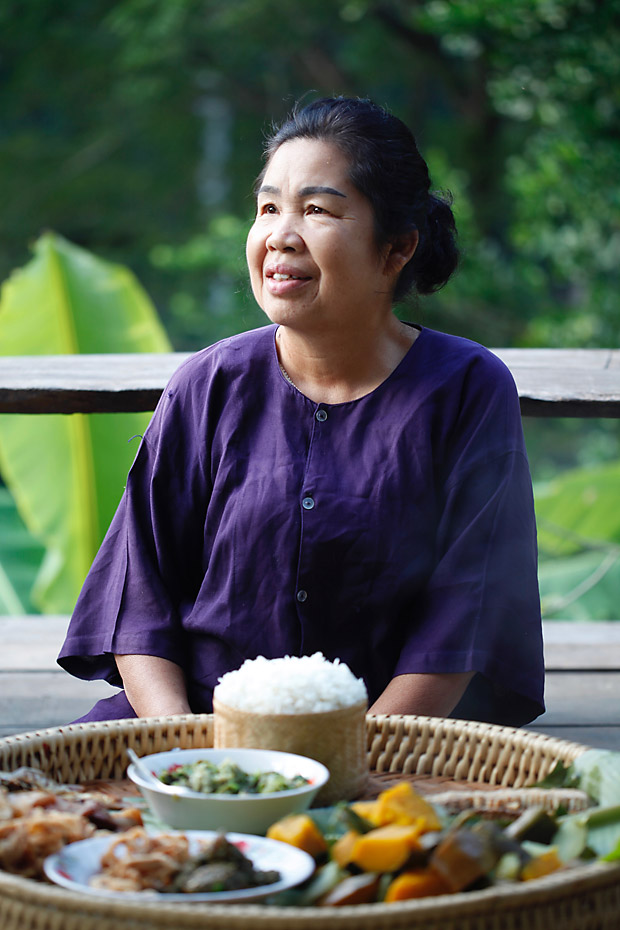 "I like helping people because it always makes me happy," said Sangiam, 64.

1994: Sangiam elected as a member of Tambon Administrative Organisation of Ban Tuek where Ban Na Ton Chan is located.

1998: The group is upgraded to Ban Na Ton Chan Weaving Group with 56 members and receives financial support from the Community Development Department.

1999-2003: Ban Na Ton Chan is chosen by the Department of Industrial Promotion, in co-operation with the Tourism Authority of Thailand, as part of the industrial village project, which launched in 1994 to help increase the value of communities through their local products and to promote the communities as tourist destinations.

2004: DIP and TAT review the project and select Ban Na Ton Chan among five premium communities to travel to Japan on an 18-day educational trip to experience how Japanese villages operated and managed their One Tambon One Products and homestay services. After returning to her village, Sangiam opens her house as the first homestay facility in the village.

2007: The mud fabrics and clothes are exported to Italy and the United States.

2008: Homestay service grows from one to 16 houses. They were also certified to homestay service standard by the Tourism Department. Ban Na Ton Chan selected as one of the shooting locations for candidates of Miss Thailand 2008 to try making mud-fermented cloth and khao poeb.

2014: Sangiam receives the Outstanding Woman Award from the Ministry of Social Development and Human Security.

More than 30 years ago, Sangiam was a typical housewife and a vendor who sold Thai desserts and food for a living. She was born in a hand-to-mouth family in the village, got married to a farmer and had two children. She recalled that her village was quite poor and remote. Most of them were rice farmers.

During dry season, they loaded their farm produce in oxcarts to sell it in the town of Si Satchanalai, about 16km away. It was a happy time for farmers because they could have cash to buy icy sweet drinks and noodle dishes. Such food was not available in their village at that time.

When the Community Development Department launched its project in the village, Sangiam applied for the job. At that time, she thought she wanted to do something to improve the quality of life of her family and other villagers. After undertaking door-to-door visits, she realised that to have a solid voice, she had to rally support in the form of a community group, and she founded one with 21 farmers' wives. They helped each other in farming matters and contributed part of their earnings to the group. They spent the budget on developing their community, including renovating school buildings and temples.

When the new Tambon Administrative Organisation was launched nationwide in 1994, Sangiam won a seat on the committee. Her determination to improve the community grew stronger. She upgraded the group to Ban Na Ton Chan Cloth Weaving Group. It had 56 members and operated like a co-operative. The aim was to find extra income by promoting their handmade woven fabrics.

Like other rural communities, women in Ban Na Ton Chan weave cotton cloth for their own use and sell some to earn more money. But any community can produce cotton cloth so Sangiam wanted to find a unique selling point.

She looked around and discovered an old technique of their ancestors -- using mud to soften the textiles.

"Our ancestors wore sarongs while working in rice paddies. The edge that got mud stains became softer than the upper part so we applied this technique to our fabrics," she said.

There was trial and error for a couple of years until she knew how to make good quality mud-fermented cloth. She had to use mud from the middle of a still pond, filtered out other dirt and let the mud settle in an earthen jar before soaking cotton fabric into it for a day.

"Before knowing how to produce mud cloth, my face, hands and toe nails always got dirty. My back and shoulders ached," she said.

Sangiam did not keep the dying technique to herself. She shared it among the members of her group and also encouraged them to dye cotton yarns from natural materials, such as red from lac extract and black from ebony fruits. 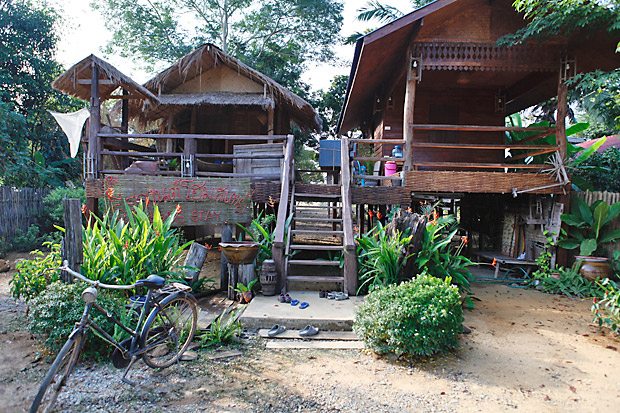 Homestay facilities were built next to Sangiam’s home.

Their velvet fabrics got a warm welcome from customers. The clothes also gained a reputation. In 1999, Ban Na Ton Chan was selected by the Department of Industrial Promotion (DIP) and the Tourism Authority of Thailand (TAT) to join the industrial village project, which focused on improving local economies, manufacturing, farms and tourism.

Ban Na Ton Chan and another 19 communities in 19 provinces each received five years of training and financial support of 2.8 million baht.

"The project gave huge benefit to our community. We learned about product management, marketing, project administration and tourism promotion. We also had a chance to join educational trips throughout the Kingdom, like visiting Ban Khiriwong in Nakhon Si Thammarat and Ban Prasae Homestay in Rayong to learn from their successful homestay models," she said. 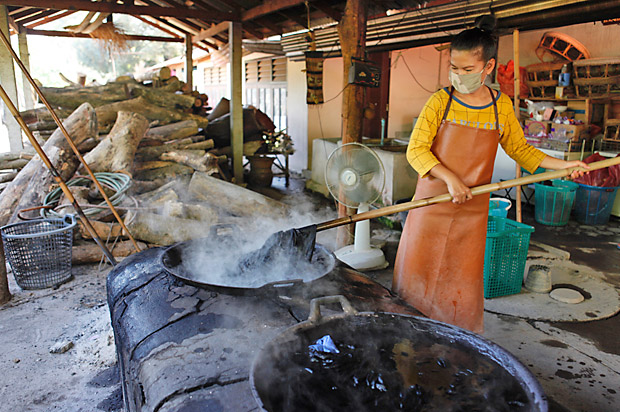 A local person dying cloth in the traditional way.

The project was also an eye opener. As group leader, Sangiam realised that she could use mud-fermented cloth to promote tourism for her community. Her idea was affirmed after Ban Na Ton Chan was selected as one of five premium industrial villages by a follow-up project of DIP and TAT in 2004.

She had a chance to visit Japan for 18 days to experience the original idea of One Tambon One Product (OTOP), which was adapted from the One Village One Product movement and homestay service in Japan.

"I joined a 10-day training course in Tokyo and spent four days in Tomiura and another four days in Uchiko. After returning from Japan, I held a meeting to share my experiences with our community. I wanted to encourage them to open homestays," she said. 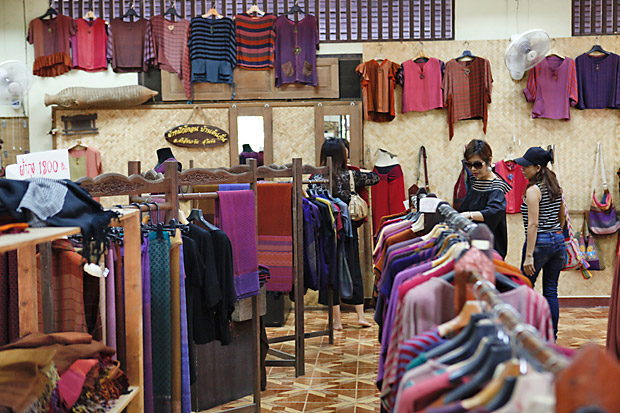 The community shops offer many designs of mud-fermented clothes and fabrics.

Sangiam was very excited with experiences she gained from Japan, but she couldn't find any members who supported her idea.

Some thought it was a good initiative, but they did not yet want to have strangers staying in their homes, while many opposed the idea.

"They said our community was remote. We did not have beautiful mountains, waterfalls or fields of flowers to attract visitors. They wondered who would come to our village. But they didn't know that our core value is not those tangibles, but our way of living and local intellect," she said.

To convince her members, Sangiam decided to open her house as a model for a homestay service. Her first visitors were a group of college students from Phitsanulok. They wanted to stay overnight to learn how to make mud clothes.

Once she realised that she would really have overnight visitors, she felt confused.

"I laughed and cried like crazy," she said. She laughed because she was very glad that the community would have homestay visitors, but she was worried because she didn't have enough houses to host them.

She asked for help from teachers. They converted a school library and nursery rooms for temporary accommodation for the visitors. Her relatives and friends helped cook for the group. Later word of mouth created magic. More visitors wanted to come to the village. Most of them were students and those in the academic sector.

During the first five years, she admitted that it was not all rosy.

"I was totally exhausted. I wanted to give up many times. But when that feeling struck me, I thought about our late king who is my role model for hard work. I knew that I could not stand down from my task," she said.

Her effort finally paid off when 16 families agreed to renovate their houses for the homestay service. Together they applied for a homestay standard and got certified by the Tourism Department in 2008.

"We have a unique noodle dish called khao poeb. It is made of fresh and healthy ingredients so I wanted to use the dish to promote our village," she said.

Originated in her village, khao poeb is made of steamed rice flour crepe with vegetable filling and served in soup with egg and minced pork.

She wanted to introduce the noodle dish in the large annual OTOP event in Bangkok. But first she needed approval from local authorities because the dish would represent food from Sukhothai. She received the green light one day before the event kicked off. Sangiam was very glad. She and eight-strong team of housewives happily loaded all needed ingredients and cooking tools into a pickup and drove to Bangkok.

In the early morning, while they unloaded their stuff, they received unexpected information. An organiser prohibited them to use gas stoves for cooking inside Impact Exhibition Hall.

"Our smiley faces turned pale. It was a real shock," she said. Some of them sat hopelessly on the ground while Sangiam buried her face in her hands. Then she saw her 2 baht gold necklace. She took it out and asked one of her team to sell the necklace and bought four electric pans and two large rice cookers for making noodle soup. They managed to open their booth on the second day.

"I had to explain what khao poeb was to everyone who showed up at our booth. Some were convinced and wanted to try while others did not pay much attention. They didn't even know where our village was," she recalled.

Fortunately, a morning TV news anchor came across to Ban Na Ton Chan's booth and the host was hooked by the name of khao poeb. After the TV programme was broadcast, customers flooded to the booth like a never-ending stream. Everyone wanted to try khao poeb. They also recognised Sangiam from the news programme.

Their khao poeb dish sold out fast. None of them had time for their own meals. After the 10-day event ended, they earned more than 100,000 baht.

"We all returned home with happiness," she said.

Supported by the members of her homestay and cloth-weaving groups, Sangiam set aside the money for building a community shop where visitors can try khao poeb and shop for mud-fermented clothes and dresses. It is also a learning centre for visitors to have real experience on how mud clothes are made.

To recognise the effort of the community in creative tourism and their ability to promote their community values and traditional wisdom, Pacific Asia Travel Association (Pata) gave Ban Na Ton Chan Pata's Gold Award in 2012. It was the first community in Thailand that won the international award. The village also won the TAT's Tourism Award that same year.

On the shelves and walls of Ban Na Ton Chan's community shop, there are more awards, tokens and certifications.

Sangiam is overjoyed by the community achievements.

"When I started the group for farmers' wives, I only wanted us to have more earnings and to love our community. What I've done can create jobs for a large number of people. They don't have to leave the community to find work elsewhere. We can have enough to live our happy lives. Whenever I think about this, it makes me proud," she said. 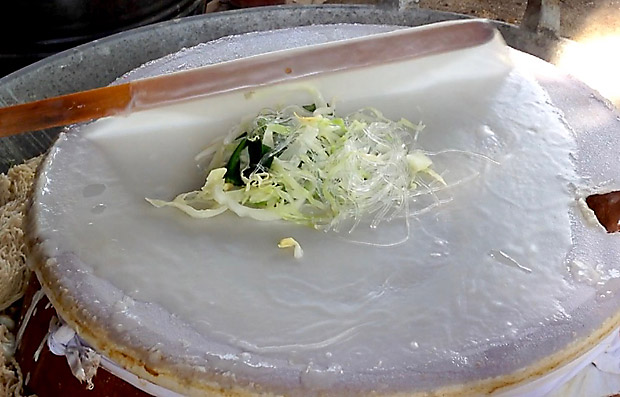 Khao poeb is cooked on a stove.