At the animal café

Taking a deeper look at a peculiar phenomenon

How do you like the idea of eating bakery and sipping on soda, all the while playing with cats, dogs, rabbits and more? It may sound off to some, but for many animal lovers, the experience feels just like heaven -- and can now be accomplished at animal cafés all over the country.

Over the past few years, animal cafés have been popping up in all corners of Thailand. There are at least two in the teen district of Siam Square that are always packed throughout the day. The booming business trend even spread to the Deep South, with a cat café now running in Pattani, all the more guaranteeing the popularity and demand of such premises.

"The business is going quite well in this niche market. Some people are really fond of animals, but they can't have pets due to space limitations and lack of time. So going to a café is one alternative for them to play with the animals of their liking, without undertaking the extra responsibilities of caring and feeding them," said Oratai Sricham, who operates the family-owned cat café Catzilla in Salaya, Nakhon Pathom. Her customers are generally university students and local families -- many of whom are regulars. 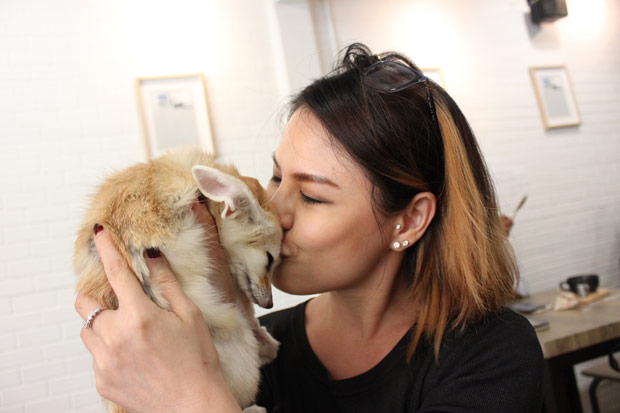 Auraphan Eukittaropakorn, of The Little Zoo Café, with her fennec fox Tissue.

Anyone visiting an animal café today would be amazed at the types of animals available for people to take selfies and cuddle with. From domestic favourites like cats and dogs, the trend has grown to encompass rabbits, guinea pigs, and -- for more exotic options -- raccoons, owls, fennec foxes, meerkats, caracals (African wildcats) and more.

The animal café was believed to originate in Taiwan in 1998 when a cat café first went into business. But it was in Japan where these furry attractions truly blossomed and later began to take over the world. The trend most likely arrived around three years ago in Thailand.

Since its conception, these cafés have garnered both the world's adoration as well as some apprehension regarding their hygiene and the welfare of animals living within. 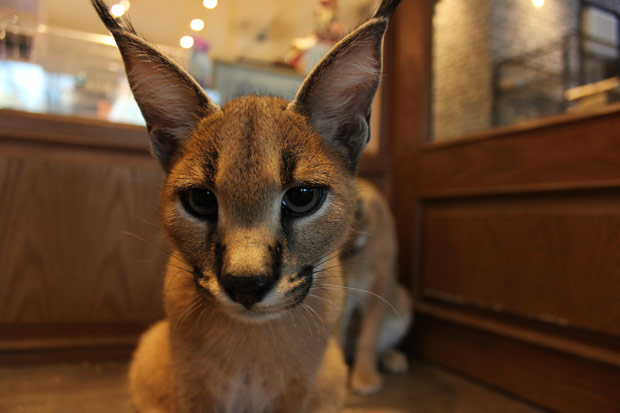 Exotic animals such as Caracal are increasingly becoming more popular.

As of now, there are no regulations in place setting clear boundaries and standards for animal cafés operating in Thailand. Still, it has been found on a recent visit to some animal cafés around Bangkok that the café owners have at least adopted self-regulating practices, like asking guests to wash their hands and take off their shoes before entering the premises. Some even offer clean slippers for guests to change into.

Regarding her own approach to the sanitation issue, Oratai from Catzilla Cafe shared that she would give her seven cats a bath every week. They are regularly vaccinated. The café is also fixed with an air purifier and cleansed daily with disinfectant to handle cat hair, germs and odour.

Asst Prof Gunn Kaewmongkol, veterinarian and lecturer at the Department of Companion Animal Clinical Sciences, Faculty of Veterinary Medicine, Kasetsart University, suggested that the hygiene responsibility should also be undertaken by those visiting the cafés. There are different types of parasite, protozoa and bacteria that can be passed from animal to human, which can cause anything from skin irritation to diarrhoea. Some diseases may also manifest without visible signs. It is highly recommended that customers wash their hands with soap and water -- every time -- before and after contact with animals.

The academic added that owners of animal cafés may consider separating the areas for dining and for pets, to prevent animal hair and debris from getting into the food, and that people should refrain from touching the animals while eating. These practices should also be adopted at home by pet owners. 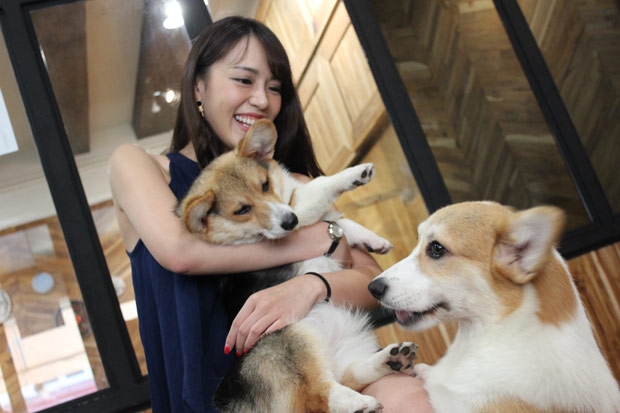 Having fun with corgis.

CONCERNS OVER ANIMAL WELFARE AND TREATMENT

Is it healthy to keep a bunch of animals in a small, enclosed space? Not really, said Gunn.

A café should come with sufficient space for both humans and animals. It could induce stress in some animals to be in a crowded room with constant disturbance, which could lead to sickness and shortened lifespan.

"However, this is mainly speculation. No one has yet to conduct research on the matter," he said.

Animals like cats may prefer some isolation. Dogs, Gunn added, would fare better in this form of business, as they like to be in human company.

In 2014, the Prevention of Animal Cruelty and Provision of Animal Welfare Act came about in Thailand to prohibit the neglect and torture of animals. But what exactly constitutes torture? Since "working" -- including the amount of hours and the conditions in which these animals work -- has yet to be regulated, the answer remains unclear.

While some cafés may leave the animals out for customers to play with all day, at Little Zoo Cafe in Siam Square, different types of animals are separated into zones and given regular break times. Customers can play with certain animals during designated periods under staff supervision.

"We even separate zoning for big and small dogs, for example our corgis and chihuahuas," said Auraphan Eukittaropakorn of the Little Zoo Cafe. "It is done to prevent harm befalling smaller dogs. Big dogs can play a little rough sometimes."

In operating an animal café, Auraphan said the owner has to love animals, and must be knowledgeable in the behaviour of the creatures they choose for their cafés, including their likes and dislikes.

Most cafés now impose rules to guests that they should refrain from using flash when taking photos, feeding animals with anything other than the shop's provided animal treats and disturbing animals when they are sleeping.

For the utmost benefit of the animals, it takes both owners and customers sharing responsibility over the creatures' welfare. Owners should provide their animals the best care but, at the same time, customers must also be aware of rules set by the operator and respect them. 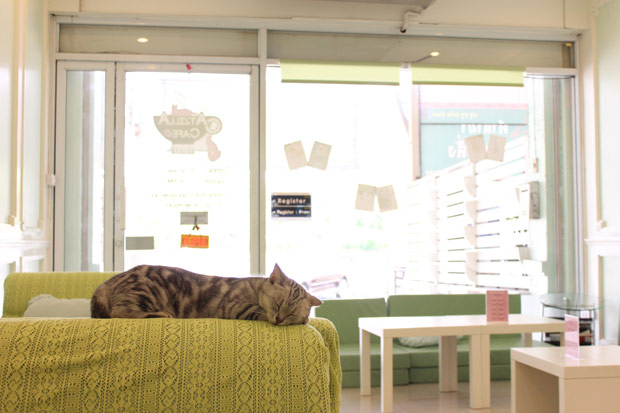 Many cafés ask guests not to disturb animals while they are sleeping.

Cats and dogs aside, one of the rising trends for animal cafés right now is exotic creatures.

Little Zoo Cafe, with branches in Muang Thong Thani and Siam Square, came into business over a year ago and has since been drawing throngs of local and international customers. Animals include the jerboa (hopping desert rodent), caracal, fennec fox, raccoon and meerkat.

Auraphan said she and her partners came up with the idea when exotic animals became popular in Thailand. After the fashion faded, some became dissatisfied with the animals.

The exotic creatures then became locked up or abandoned, which led Auraphan to the idea of opening up a space for people to learn about these creatures -- a community space for exotic animal lovers and enthusiasts -- before deciding to get their own.

"It's not about making money but about educating on what these animals are like. We want to show that they can be tamed. They are not violent," she said.

To possess these exotic creatures, owners need a Convention on International Trade in Endangered Species of Wild Fauna and Flora (Cites) permit. While the animals were originally imported, they are now being taken from a local breeding farm. Auraphan said calling these animals wild wouldn't be entirely correct, as they are now domesticated.

It should be noted that operating an animal café in Thailand requires no license. However, it appears that operators are doing a pretty good job of caring for the animals. There has been no known case of both hygiene and animal-treatment issues at a Thai animal café.

Nevertheless, a handful of experts are saying that regulation is needed, to set a clear standard of practice.

Suthep Yimlamul, director of the Bureau of Legal Affairs, Department of Livestock Development, revealed in a recent public talk at Mahidol University that laws are being developed. Still, there have been no details on what such regulation would entail or when it will be put into motion.

"Animal cafés are still quite new. We must not forget to also look into pet salons, spas, hotels and taxis. There is still no law to regulate them, either. It is expected that these places will require a license to operate in the future," said Suthep.

"These café businesses still lack a clear, standardised guideline, very much the way elephant camps do," said Assoc Prof Parnthep Ratanakorn, dean of Mahidol University's Faculty of Veterinary Science, who chaired the public talk. "Soon, there will need to be regulations. Places must be registered. And I don't think it's going to be problematic for the operators, but will support and protect their businesses."

"These businesses should go on, but they must also be operated with standardised quality. The government will need to set a guideline for all to adhere to. As for educational institutions, they can do their parts in educating the public, so that everyone is made aware of the same information, making it safe for both man and animal," said Parnthep.

SOME OF THE ANIMAL CAFES IN BANGKOK

Meet Jacob, the Old English Sheepdog that is the star of the café, along with his pals right inside the teen capital of Siam Square. The place offers grooming and salon services, and they make the cutest puppy-shaped cupcake.

Leave busy Bangkok and drop by this dog café on the outskirts of town. The place is filled with Siberian Huskies and Shiba Inus that can perform simple tricks if offered treats. There's a big lawn outside for dogs to run around.

If you're looking for a restaurant where you can mingle with exotic animals, The Animal Café may be your place. Guests can borrow Harry Potter costumes and take photos with a snowy owl (reportedly named Hedwig).

Rabbit lovers should already be acquainted with this café, which packs a cute throng of guinea pigs. Get a discount if you bring your own bunny. If the weather permits, guests can try walking the bunnies on the outside lawn in late afternoon.

In Cannes, it's cinema as usual

Korean centre opens its library to all