Transgenders happy to come out from the shadows
Thailand
General

Transgenders happy to come out from the shadows

For centuries in the Land of Smiles, men with an outwardly feminine appearance felt offended when they were called "katoey" or "toot" (transvestite). But as time goes by, more gays and transpeople have come out in the public spotlight than ever before.

In the popular Diary of Tootsies: The Series, all the main characters are openly gay, while 17-year-old transgender fashionista Madaew from Isan has become famous internationally for turning everyday items into chic costumes.

Three successful transgenders -- a former performer at Alcazar in Pattaya, a Miss Tiffany's Universe 2010 runner-up and an LGBT magazine editor-in-chief -- agreed that wholehearted acceptance from their family members, especially their own parents, is the key to their confidence to disclose their sexual orientation and identity.

Sharing the sentiment on International Transgender Day of Visibility on March 31 was Nampetch "Nadia" Chinnawong, a runner-up in Miss Tiffany's Universe 2010 and aspiring model who hid her sexual identity and feared being rejected by her conservative parents when she was young.

"I dressed up for school as a boy, but I was always interested in male classmates," she said.

Hoping to change who she was, her parents sent her to the all-boy Suankularb Wittayalai School in Bangkok. "My dad was wrong. Many students at school were gays."

She also recounted that her parents were often taken aback by a question from their friends -- "How did you raise a son as a girl?" -- which she found very annoying.

To convince her parents to love her for who she was, Nadia excelled in her studies, got a scholarship to study in Mexico and never let her parents down.

On the night when she was officially named as a Miss Tiffany's Universe 2010 runner-up, her father said one thing she had never heard before.

"It was the first time since I publicly displayed my sexual identity. My father told me that he was so proud of having me as his daughter," Nadia said with a bright smile on her face.

Seeing a son act like a girl is not something most parents can easily accept. Teerawat "Dutdew" Budtaya, a net idol and former performer at the Alcazar cabaret, recalled the tense moment when she decided to tell her mother that she was not a man.

"I remember that day very well. After I told my mom, she did not say anything. She broke down in tears," she said. 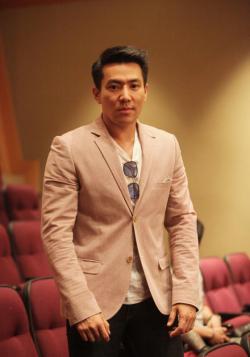 Dutdew did whatever she could to prove that she could financially support her family and that being gay was not a burden. Now she is a business owner selling dietary supplements.

"The best day of my life was when my parents introduced me to their friends and told them that I was their youngest daughter," Dutdew told an audience who were mostly from the gay community.

A gradual evolution and public acceptance of the third gender in areas of employment are also taking place, said Dutdew, who hopes more positive changes are on the horizon for her country.

"Be whatever you want to be because you are in charge of your own happiness," she said.

Besides transwomen, transmen are also becoming more prominent in Thai society. The Bangkok Post spoke to one, who said it was not easy to be a transman because people barely know what a transman actually is.

"I have known I was never interested in men for as long as I can remember. I have also known I was not a tomboy either. I knew I was a man," said Phoomwarin "Jik" Sudhankitara, who went through a transition from female to male.

He learned about the Transmen Club when he was studying in England, but at home in Bangkok he was struggling even with little things like doing financial transactions at a bank.

"A bank official would get confused because I still used 'Miss' in my documents. I had to carry my doctor's medical certificate of a sex change. They still seemed unconvinced, though," he said with a laugh.

It also took a long time for his parents to accept his decision.

The marriage of LGBT couples is legally recognised in more than 20 countries, while South Africa is the only nation in Africa where gay marriage is recognised.

No country in Asia recognises same-sex relationships legally and Thailand has a long battle ahead in the fight for the acceptance of the third gender in the eyes of the law, said Theerawat "Tina" Tongwit, 32, a graduate from Silpakorn University's faculty of decorative arts and the founder of Thailand's first-ever LGBT online magazine, Prism.

Even though the Gender Equality Act was passed in September 2015 to quell discrimination against LGBTI communities in Thailand, laws governing same-sex marriage and child adoption by homosexual couples have yet to be passed despite several efforts by activists, she said.

"A same-sex couple can stay together in society without stirring conflicts, but to be recognised by law, we are not there yet", Tina said.

She also pointed out that it was totally wrong to think that gay people cannot have their own family and children.

"I do not know who will be a father or a mother, but we [gays] can be good guardians and take good care of our children. A gay couple should be treated as an ordinary one," she said.