Why let the Grim Reaper ruin the Songkran water-splashing fun?

As I write this column, a pickup truck travelling home to Hat Yai for Songkran has just crashed, killing two and seriously injuring another five of the same family. The pickup in question lost control and slammed into trees on the side of the road in the province of Prachuap Khiri Khan, just past Hua Hin. The driver was killed instantly. 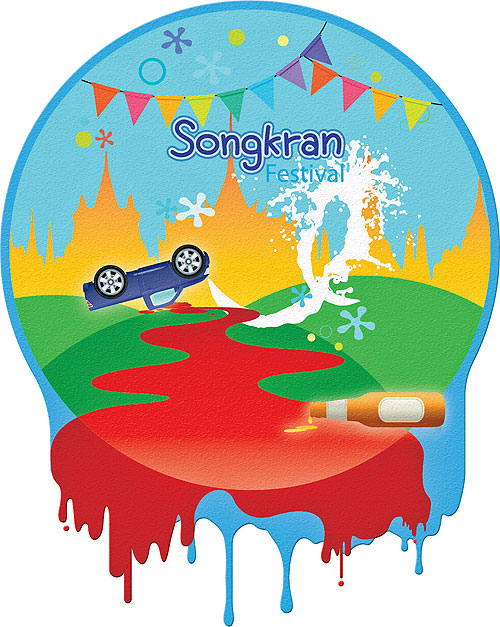 The rest of the injured passengers -- six in total -- were sitting in the back of the pickup and were thrown out of the vehicle. One of those six passengers died on the way to nearby Sam Roi Yod Hospital. Two of the seriously injured are children.

Yes, but at least they were having fun.

That last sentence was a cruel thing to write. It was uncaring and morbid. But it is relevant to what is going on in Thailand today, and it's better than my original sentence of "I told you so!" while jumping up and down like a kid in a candy shop.

This column is being written on late Sunday night before Songkran. Normally there isn't such a gap between writing this column and it being published, but I received a plaintive email from my esteemed copy editor asking if I could send my column early this week.

It was for some reason I can't quite remember. With the impending Songkran, my copy editor wished to spend more time at the temple listening to monks preach about ways to avoid suffering … something like that. The details are lost, but I acceded, though not before telling him that if he really wanted to avoid suffering, he shouldn't open the bottle in the first place.

I have a nightly radio show co-hosted by the inimitable Ornuma Kasetpheutphon, a well-known award-winning TV and radio announcer. She hosts a TV show called Sathanee Prachachon (The People's Station), where grass-roots people come to air their grievances, so she has her finger on the pulse of Thailand's rural population.

We often we end up chatting about current topics. A few days ago we talked about Songkran, in particular the government's plan to instigate a ban on passengers travelling in the back of ubiquitous pickup trucks.

That ban was quickly repealed after the entire country howled in protest. A ban on riding in the back of pickup trucks? Whatever's the next crazy idea -- adhering to traffic lights? Stopping at zebra crossings?

Thailand is one of the world's biggest markets for pickup trucks; more than half of domestic vehicle sales are pickups, according to the Land Transport Department. Unfortunately the department doesn't keep figures as to how many of those pickups are driven by drunken speeding lunatics over Songkran, but I would hazard an educated guess and say, oh, a conservative 95%.

This is the week statistically you are most likely to be killed on the roads. Thailand is number two in the world for traffic deaths per capita, and it is over Songkran where the bodies stack up more than any other time.

It is not rocket science as to why. Alcohol and speed are the two major reasons. That and the hilarious custom of standing on the side of the road shoving buckets of water into the faces of passing motorcyclists.

Every year, without fail, the government comes out with a new campaign to reduce the road toll. Every year, without fail, that campaign fails. Last year they tried repossessing the cars of drink-drivers. It didn't work. The road toll jumped from 364 to 442. That meant a dead body every 20 minutes for seven days. Even the threat of vehicle repossession didn't faze the drunkards.

Why is that? It is easy to say "the authorities aren't tough enough", but the real answer could lie in a word so devoid and detached from road carnage and yet so Thai -- the element of sanook.

Sanook is an intrinsic part of Thailand and its culture. If it ain't fun, it won't work. Could it be Thailand's love of all things sanook that stops any meaningful steps to reduce the road toll?

Anybody coming from a country not in the Top 10 Highest Road Fatalities In The World (the other nine are impoverished African nations) would understand the government proposal to ban riding in the back of pickups. It's just not done in countries with normal road tolls.

I tried to push this point in our radio show this week, but Ornuma spoke for most Thais when she said: "No, that cannot be done. You can't do that in Thailand."

"Khun Andrew, you come from Australia. You may not understand that in Thailand we have a lot of poor country folk." How I wanted to ask exactly how coming from Australia would render me unable to grasp that fact, but sometimes it is better to keep the peace and allow co-hosts to continue uninterrupted.

"If you ban people sitting in the back seat, how are poor families in the provinces going to travel? It's an ingrained part of Thai culture. Let's say you have to drive to a wedding 30 kilometres away. You have a family of six, so only three or four can sit in the front. What is going to happen to the other two? How are they going to get to the wedding? Are you going to force them to stay at home?"

Point well taken. Imagine how high I would be on the Farang Popularity Chart if I denied one third of an impoverished Isan family the right to get smashed on local rice whisky at a wedding, all because they couldn't sit in the back of a pickup. But I do wonder in which parallel universe I would ever have the power to issue such edicts to impoverished Isan families.

Our radio show has the option of listeners sending in comments as we speak. Khun Ornuma's supporters were outnumbering mine.

"I agree with Ornuma!" one read.

"Poor people would be disadvantaged … again!" read another.

I tried to make the point that spending a boring night at the rural homestead may not be as fun as getting sozzled at a wedding -- but "poor and left out of the party" is better than "mangled and dead".

"Ornuma's right," came in another SMS.

"Thais love sanook," another one said.

"And let me ask you one thing," said Ornuma. She was enjoying the spoils of victory. "What are the reasons people die on the roads? I'll tell you. Number one is alcohol. Number two is speed. Nowhere on that list is sitting in the back of a pickup truck."

Like the government, I caved in. I threw to an ad break and changed the topic.

I have no idea what the death toll is for Songkran this year; my copy editor needed temple time, remember?

But it is freaky to think that as I write this column, there are approximately 442 people who are very much alive but who will be very dead the time it is printed, not to mention the 4,000 or so who will be injured. That doesn't even count the two dead in Prachuap Khiri Khan, whose deaths fell a few hours short of the beginning of this Songkran's Seven Days of Death road toll.

The one light at the end of the tunnel is the government's declaration that the pickup truck ban will be enforced after Songkran.

That's positive, albeit a little weird. It's as if we are allowing 442 people to die before enforcing a law that could have prevented their deaths.

But this is Thailand, and remember, dear reader, as Ornuma reminded me … you too might come from Australia. n