All over the world
Life
Social & Lifestyle

All over the world

A busy month of LGBTI activity, at home and abroad

We're reaching the end of May, or as many LGBTI would call it, the Idahot month. The world celebrated, in 1990, the World Health Organization's decided to no longer classify homosexuality as a mental illness. The battle against homophobia, transphobia and biphobia has been long endured and well fought, and now the resistance continues.

THE UPS AND DOWNS OF ASIA

Of course, aside from that advance, we have reached yet another milestone this month. Just last week, Taiwan celebrated their top court's ruling in favour of same-sex marriage, meaning they're one step closer to becoming the first Asian nation to attain marriage equality.

Cheers are now echoing throughout the world. At least, we seem to see some hope rising in the region as, elsewhere in Asia, things can be comparatively bleak.

While the party went off in Taiwan, the situation descended into inhumane horror for two men in Aceh, Indonesia. The men, in their 20s, were caned publicly over 80 times for engaging in homosexual acts in the conservative province, which follows strict Islamic law deeming same-sex activities illegal and prosecutable.

In the Indonesian capital of Jakarta, there was a crackdown on a gay sauna. The raid resulted in more than 140 men being arrested by the police for violating pornography laws.

Over in Singapore, many raised their eyebrows and threw their hands up in frustration when it was announced that the country's annual pride rally Pink Dot -- set for July 1 -- can only welcome Singaporean citizens and permanent residents due to a recent change in regulation.

So, no foreigners allowed, even as spectators. Fail to comply and both the foreign participant and organisers could be susceptible to fines and imprisonment.

The government representative said this Public Order Act was made against foreign involvement in Singaporean causes. It doesn't reflect the government's stance on the Pride rally, which it neither supports nor discourages.

While we take steps both forward and backward on this side of the world, over in the US things took an interesting turn when showbiz giant MTV abolished its gender-specific categories for best acting awards at its MTV Movie and TV Awards show held in Los Angeles earlier this month. For the first time in history, we saw the likes of Hugh Jackman and Taraji P. Henson going against each other in the gender-neutral Best Actor award.

In the end, Harry Potter sweetheart Emma Watson won the award for her role as the Disney princess Belle in the live-action Beauty And The Beast. The award was presented to Watson by none other than non-binary actor Asia Kate Dillon, from the Showtime drama Billions.

Another Brit actress, the crowd's young favourite Millie Bobby Brown won Best Actor in a Show for her role as Eleven in Stranger Things.

Additionally, Best Kiss was handed to the men of the Oscar-winning, gay-themed Moonlight, joining Brokeback Mountain, which in 2006 featured another same-sex kiss that took the award.

The world is in joy and chaos, and what of our country, then? Thailand is a gay paradise to outsiders and other naive minds, but many locals would agree it's a place that still fosters the violation of human rights.

Sure, people had fun with the International Day Against Homophobia, Transphobia and Biphobia (Idahot) that took place at the Bangkok Art and Culture Centre on May 17, with guests, LGBTI families, government representatives and friendly embassies attending the festivity. At the event, an online petition for the Civil Partnership Bill on Change.org -- of which almost 60,000 people signed -- was presented to the Ministry of Justice by representatives of the LGBTI community.

The reaction to the move was strongly divided. It did receive some applause, yes, but there are also opposing bodies who view the entire act as nothing but "wiping the soldier's boots with the rainbow flag".

Isn't the LGBTI movement all about fighting for equality and human rights? Then what are we doing, pleading with the dictatorship that robbed us of our rights? Pushing for gender equality under the junta -- where thinking differently is not accepted, equality doesn't exist, and the population is not represented in the lawmaking process -- seems an ironic human-rights perplexity.

On a more light-hearted note, this month also saw a rising television star coming out as a lesbian while appearing on a talk show -- a move rarely seen in Thailand, or pretty much anywhere else in the world.

As casual as if she's talking about the weather, The Face Thailand Season 3's contestant Wilawan "Julie" Anderson said on Ruaeng Ron Online on Amarin TV that she's seeing someone "that is not a man" after the host asked if she has a boyfriend. And when the host outright questioned if she's a lesbian, she said yes.

Never one to hide, she promptly added: "I put our photos on Instagram all the time."

Coincidentally, the model performed the Frozen megahit Let It Go when the show started. The song happened to be interpreted and sang as a coming-out anthem for LGBTI people worldwide.

For moviegoers, sadly, it was announced that the third Bangkok Gay and Lesbian Film Festival is postponed indefinitely for reasons the organisers have yet to reveal. What a disappointing turn for the much-anticipated fete. So what to do? We can console ourselves with the abundance of lovey-dovey, gay-themed series and pretend everything is all right with the world.

Line TV, for example, recently hosted several series that feature doll-faced teenage male cast members in a storyline focusing on their blossoming romance. Notable mentions on the free streaming app include Make It Right and 2Moons: The Series.

If you're more into overtly dramatic fare, tune in to GMM25. Club Friday will soon return with an addition to its lengthy miniseries collection of love and jealousy. This time, the story -- entitled True Love Or Just Confusion -- explores the turmoil between a married man, his wife, and his male best friend, with whom he seems to share a special bond. Episodes air weekly every Saturday, starting on June 3 at 8.30pm. 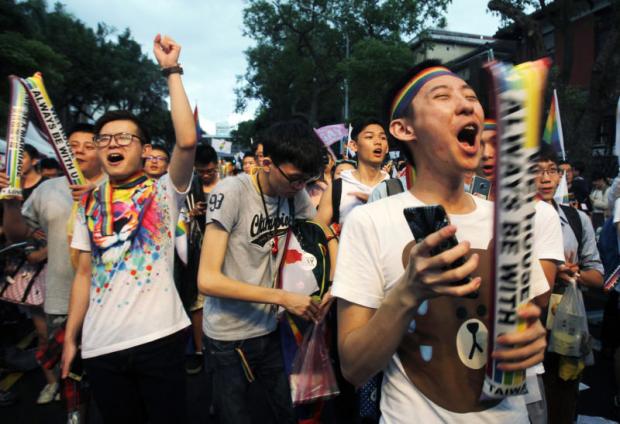 Taiwanese are overjoyed after the country's highest court ruled in favour of same-sex marriage. Photo: AP