How one Isan farmer succeeds through King Bhumibol's sufficiency theory

About a decade ago, Preecha Ngoksimma's 14 rai plot was like any other farmer's rice field. But after learning the principle of self-sufficiency propagated by the late King Bhumibol Adulyadej, Preecha has gradually turned his land into a haven of agricultural development, organic farming, a tree bank and a model of farming that can sell carbon credit for extra income.

"I'm a farmer's son. I'd like to develop our farmland to be the model for a new generation of farmers," he said.

Preecha, 33, was born in Nong Sue in Khon Kaen, a major province of the Northeast. Since he was young, he saw his parents work hard in their rice field, but the family was struggling. When he was in Mathayom 2 (Grade 8), his family was in huge debt after they were cheated by an agro-company. They bought seeds, planted pumpkins, tomatoes, chillies, cucumbers and watermelons. But when it was time for his family to sell the seeds back to the company, they were told that their seeds were substandard and thus the prices were very low.

He later learned that his family was not the only victim, so were other farmers in his community. The experience taught him that a farmer in the modern age needs proper education, and Preecha headed to the agricultural faculty at Khon Kaen University.

When he graduated, his mother didn't allow him to work in the farm. It's a traditional belief that people with degree should work in air-conditioned offices in the city, not toiling away in the rice field.

But Preecha knew that such a job was not for him. Still, he needed start-up money, and Preecha worked for eight years at the Bhumirak Dhamachart Centre of Chaipattana Foundation in Nakhon Nayok -- his first and only salaried job. The centre was founded in 1989 to be a learning centre for King Bhumibol's royal development projects.

During those years of working in the centre, he divided his salary into three parts: saving, spending and future investment for his farm. 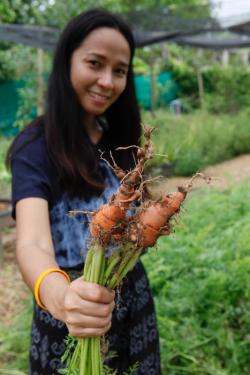 During the first two years of working as an agriculturist who taught farmers about self-sufficiency, he also visited his home and tried to adapt the new philosophy to the way his parents worked. He started with the smallest change, by planting trees.

But the knowledge most farmers have was "pseudoscience", Preecha said, adding that they believe in using chemical fertilisers and pesticides to increase the quantity of rice. The chemical products represent a huge cost for farmers and that eventually leads to debt and sickness.

After planting many types of trees, including yang na (hairy-leaf apitong tree), takhian (Hopea odorata), bunnak (Ceylon ironwood), mahogany and teak, he built two ponds so his family could have water during dry season. He also released 5,000 fish to each pond, and that included Nile tilapia, catfish and common carp.

"Within the first two years, we harvested mushrooms such as hed ra-ngok lueang [or half-dyed slender Caesar, priced at 300 baht per kg] and fish," he said, adding that this gradually convinced his mother to see the merit of the new farming principle. Finally, she allowed Preecha to take charge of the land.

Preecha named his farm Wanaphan Garden. He segmented the land into four zones. The first 6 rai of land is reserved for growing organic rice.

"We plant rice for our own consumption, so we do not use any chemical products to harm our health. We harvest four tonnes of rice every year. The produce is more than enough for our family and relatives. We can even sell about one tonne of rice a year," he said.

The next zone is organic vegetable and herbal plantations. They sell the produce via the Wanaphan Facebook Fanpage, and only to pre-order customers.

In addition, they also use the farm produce for their herbal skin and haircare products, titled Wanaphan, made by his wife, Nutpavee, a year ago.

Preecha also raises 50 chicken for selling eggs. He feeds them with organic vegetables from his farm. The earnings from selling eggs is more than enough for him to pay his utility bills and make social contributions. He also plants fruit trees like banana and guava for consumption.

The third zone is his two ponds and the last 5 rai plot of land is used for planting yang na trees.

"Trees are also our assets. They can be used for applying for a loan from a bank if I need money," he said, adding that since last year he had an extra income from the trees he planted by selling carbon credits to the Bank for Agriculture and Agricultural Co-operatives (BAAC).

In his community, he founded a branch of a tree bank. The group has 57 members. Last year, they sold 380 tonnes of carbon credits from 5,800 trees in the community. The bank pays 100 baht per tonne and an additional 3 baht for each tree per year.

"From every 100 baht of earnings, 60% is given to tree owners, 30% to a committee that measures trees for the value of carbon credit and 10% for running our tree bank," he said, adding that the group members have 38,000 trees in total and the tree can mean future savings for each farmer.

"Imagine you buy the seedling of a tree for 5 baht. When the tree is 1.3m tall and its trunk is about the size of your thumb, you can sell carbon credit from the tree. Today, I have 600 yang na trees in my farm. In 20 years, I can earn up to 30,000 baht from selling the carbon credit of one tree. I'll have 18 million baht waiting for me even before I reach 60 years old.

"Planting trees can make me earn much more than growing rice, sugar cane or potato. This is the best business that any farmer can be in," he said.

Preecha also tried to promote the idea of planting trees for selling carbon credit to his visitors. His farm is also open as a learning centre for self-sufficiency economics.

In the next couple of years, he plans to introduce a farmstay service to spread the philosophy of King Bhumibol and to serve as a new tourist attraction in Khon Kaen.

"Being a farmer is like being the owner of a company. You have to have skills and knowledge in order to make your business succeed." 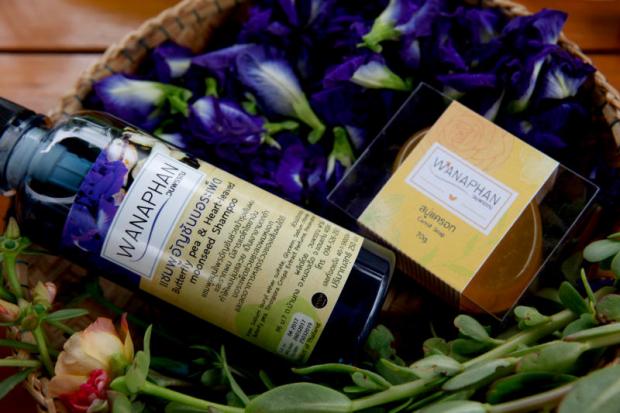