From the ring to the screen
Life
Social & Lifestyle

From the ring to the screen

It is pretty obvious that the famed muay Thai fighter Buakaw Banchamek does not feel comfortable wearing a neck tie.

He wasn't wearing wear one with his dark blue suit when he met his Chinese fans at the 20th Shanghai International Film Festival last month. The wardrobe accessory is also not familiar to fans who always see him in boxing shorts, his bare torso sporting a six-pack.

"He is very charming," said Sujian Wei. She watches every boxing match of Buakaw during the past three years. She said Buakaw is her hero.

In his first movie, Thongdee Fun Khao, which came out earlier this year -- and which was shown at the festival -- Buakaw plays the "broken-sword hero" who fights alongside King Taksin the Great against Burmese troops during the Ayutthaya period. 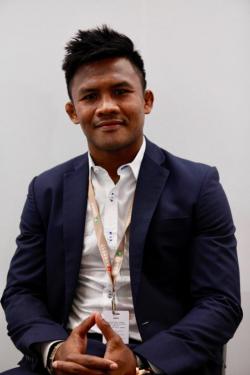 "If it hadn't been Buakao, I would not have made this film," said movie director Bin Bunluerit.

How do you feel when you see a lot of Chinese fans around you?

I am happy. This is my first time promoting my movie at an international film festival. I'm also glad to see my fans filling up the seats to see the film. I somehow feel a little bit weird, though, because I've always travelled abroad as a boxer, not as an actor.

Does it feel that much different?

I feel awkward. I am not familiar with my surroundings in a film festival. This is a new experience for me, and I'm willing to learn more about it. Many of my Chinese boxing fans also come to this event. They asked to take pictures with me and asked for my autograph. Some of them also told me that they cheer me on every match. I feel overwhelmed.

Which do you prefer -- boxing or acting?

They're two totally different things! I prefer boxing to acting. For me boxing is much easier. Although boxing is hard work, I feel it is a workout. Above all, boxing is my real career.

I am very new to acting. I think I also like it, but I have to admit that it's very hard being an actor. During my first shooting day, I thought about giving up many times, because I thought I already tried hard but the director wasn't pleased. I told myself that I had to make it through, so I kept practising dialogue, exercising my tone to add power to it, learning to express feelings on my face and through my acting.

Do you plan to be in another movie?

I think so. I have to choose a script that is right for me. I like to act with my Thai kick-boxing skills because it makes me feel like I'm playing another role in promoting our cultural heritage.

What do you do now? 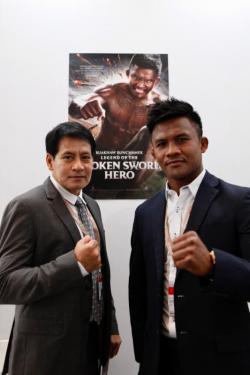 I do many things. I run Banchamek gym [started with a self-investment of 10 million baht and located on a 1 rai plot in Soi Yothinphathana in Bangkok]. If I have time, I am also a muay Thai trainer in my gym. My students are from many countries, including some Hollywood celebrities and royal family members from abroad. I am honoured and glad.

I also have a TV show. I work with Workpoint channel for the Super Muay Thai programme.

Are there other things you want to do?

There are plenty. I also try to learn if I have other skills or interests. I have been contacted by some TV programmes to host a show or be part of an anchor team. I'm considering those offers because I also want to know if I can do other things than being a boxer or working on a TV show about boxing.

How long will you fight in the boxing ring?

I can't yet say when I will stop. It's the future. I know that one day I will retire. If one day I feel bored, I can stop fighting right away because I have everything now. In my life, I have travelled throughout the world for muay Thai flights. Everyone is my fierce competitor if I do not prepare myself, so I still keep practising.

I have to take good care of my health. I have to check my physical strength and body after every match. I also have a regular check-up. It's like having a car -- you need to have good maintenance. Me, I exercise everyday (6am-9am and 3pm-7pm) and get enough sleep. Good sleep is very important for staying fit.

What is your personal goal?

My goal is to promote muay Thai. It is the thing that I truly know and am good at. I learned muay Thai when I was at eight years old [in his hometown of Surin). Muay Thai is always in my heart and soul, and I want to keep it alive.

What would you suggest to those who want to learn muay Thai?

In general, people are afraid of learning muay Thai because they do not want to get hurt or become overfatigued. But everything has a limit. In my gym, my instructors will tailor-make a set of exercises for their students and add more when they know their students are ready for tougher lessons.

In fact, I have many women students at my gym. They want to do exercises that can quickly burn calories. They also love kicking and punching techniques, because they want to prove to themselves that they are not weak.