Last week, the rock world reeled following the announcement that Chester Bennington, the frontman of the band Linkin Park, had ended his own life at the age of 41. It was just a couple months removed from the band's release of their seventh album in May, and a week out from the band's planned tour.

Bennington's tragic passing has raised the issue of mental health care to the forefront yet again, particularly with regards to depression, a condition Bennington had reportedly been suffering from for much of his music career. Reactions to the news were split among Thai netizens, with people expressing both their sorrow and empathy as well as their condemnation of Bennington's choice. Thai celebrity DJ Plakung, for example, was heavily criticised for his reaction, which seemed to condemn Bennington's choice instead of expressing sympathy for his passing. The DJ later issued an apology for his insensitive comments, admitting that he spoke out of ignorance to the plight faced by those suffering from depression. 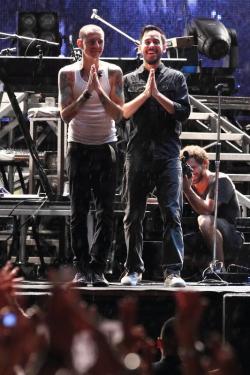 Bennington, left, with bandmate Mike Shinoda at a 2011 Linkin Park concert in Thailand.

DJ Plakung's controversial posts highlighted a persisting problem in Thai society, specifically our understanding -- or lack thereof -- of depression and its effects on the human mind. Like all mental illnesses, depression can have profound effects on a person's life in various ways. If you or someone close to you is suffering from mental illness, here are some resources that can help you:

The DMH's helpline is open 24/7, and even offers online consultations through their Facebook page (facebook.com/pg/helpline1323) from 5-10pm. Note that the consultants on the hotline, while professionally trained, are not medical professionals. Patients with serious conditions are still encouraged to seek out help from mental health doctors. The service also has the benefit of being completely anonymous and thus free of the stigma that accompanies mental health care in Thailand.

Just recently launched, Ooca is an online platform dedicated to connecting mental health patients with medical professionals through online video-calls. Patients may choose their preferred appointment time and doctor, with a starting cost of 300 baht per 15-minute session. The app's creators say that this is not equivalent to seeking actual therapy with doctors, however. Visit ooca.co.

The first dedicated mental health public hospital in Thailand, Manarom Hospital (near BTS Bang Na) offers counselling sessions with trained professionals, along with a host of other alternative treatments like art, music or drama therapy. You can check doctors' schedules right from the hospital website (manarom.com), or call to make an appointment at 02-725-9595.

Established in the UK in 1953, the Samaritans organisation is a non-profit, volunteer-based group with the aim of reducing death by suicide by befriending potential victims. You can call 02-713-6793 (Thai) or 02-713-6791 (English) to speak to understanding volunteers willing to listen. You can also apply to be a volunteer at samaritans-thailand.org.