Clean up in kitchen with versatile fruit
Life
Social & Lifestyle

Clean up in kitchen with versatile fruit

Growing your own backyard vegetable garden is great. One thing you should definitely have on hand is kaffir lime. It has that sour yet refreshing taste that makes it a favourite in Thai kitchens. Kaffir lime is no inferior species to lime -- it can actually be even more versatile. But it's not the only fruit or vegetable worthy of belonging in your garden.

Let's look at fruits first. Before shampoo was popularised, Thais relied on the humble kaffir lime crop to clean their hair. It's simple -- cut the fruit in half and rub it against your head of hair. But if you fancy a more sophisticated technique, you can grill the fruit first, then cut it and rub it in. The latter technique makes the fruit turn slightly slimy. Still, the fruit acts more or less like a shampoo. After rinsing it off, your hair will look clean and silky.

The royal tonsure ceremony, called so kan in Thai, was once an elaborate ceremony reserved for young royals -- boys aged 13, girls aged 11 -- of chopping off a segment of one's hair. Back then, children would have their hair cleaned with lime first, making it in an indispensable part of the ceremony.

Some modern shampoo manufacturers use kaffir lime as their special ingredient. Dishwashing liquid produced by some rural projects, often overseen by a group of local ladies, also use kaffir lime. It's convenient, inexpensive and highly effective.

Thai construction workers, who spend their days toiling with cement, also like to keep kaffir limes in reach. Since they don't usually wear gloves at work, their hands can get rather rough. They often describe their hands as getting "bitten" by cement, rendering them itchy like a bug bite. Rubbing kaffir lime on their hands helps them rinse off the residue. Stains and itches disappear as if nothing had happened.

Kaffir lime is highly versatile in the kitchen. In the summertime, both kaffir limes and limes offer less fruit. As lime grows more popular, it has become increasingly scarce in supply and thus more expensive. However, being less favoured, the price of kaffir lime is quite stable.

So when it's summer, consider substituting kaffir lime for lime. Say you need five limes for the recipe you're cooking. You can use a combination of three limes and two kaffir limes. But be sure you don't forget to peel off the kaffir lime rind before you squeeze the fruit. Doing so helps reduce the smell. What remains is the acidic aroma and flavour like that of a lime's. 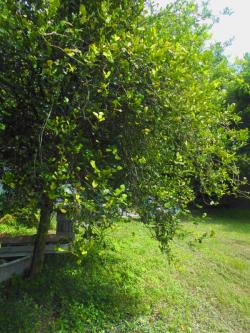 ZESTY AND ABUNDANT: Kaffir lime is quite stable in price because it is less favoured than regular lime. Photo: Suthon Sukphisit

Some like adding thinly sliced lime in nam pla prik (a sliced bird's eye chilli marinated in fish sauce, a popular condiment on Thai tables, especially in the Central region). You can always add some thinly sliced kaffir lime (peel off the rind first) to your nam pla prik.

Since kaffir lime is cheaper, you can use it for a range of other purposes. Cooking with fresh fish is generally a headache. While you're scaling, filleting and cutting the fish, the unpleasant fishy smell can stick to your hands, knife, cutting board and kitchen sink. Kaffir lime can help with this -- slice it and rub it against your hands and kitchen tools in order to rid them of the odour. Running some water to rinse can also help wash off the kitchen sink.

Another use of kaffir lime has to do with eggplants. When exposed to air, eggplant oxidises and becomes black. This gives it a slightly less appetising look. However, a quick fix you can use is placing freshly cut eggplants in a bowl of water with some sliced kaffir lime halves. This will prevent them from discolouring. Make sure to squeeze the citrus hard for the juice.

People are familiar with lime juice and honey, a classic thirst quencher. It tastes great when served both warm or iced. However, kaffir lime juice mixed with honey is getting a good name nowadays. Some say it has the ability to reduce blood fat. But you don't have to take the health side of things too seriously -- think of it as a drink to cool down on a hot day.

Kaffir lime rind is a must-have when making all types of Thai curry paste. The rind is also useful for dried fish sellers. There are several types of dried fish in Thai cuisine depending on the amount of salt used and how long it is left to dry in the sun. When wrapping preserved fish for clients, the seller places the kaffir lime besides the fish to reduce the odour.

Apart from helping with these assortment of health and cooking tasks, kaffir limes serve up the delicious aroma of tom yum soup. Some type of red curries and sour curries, especially the southern-style sour curry with young coconut shoot and barramundi, is more fragrant and flavourful when kaffir limes are thrown into the mix.

Before tossing the fish into the simmering oil, southern-style cooks rub or marinate it with a pounded mixture of fresh turmeric, garlic and salt. Before you lift the fried fish out of the wok, try adding some kaffir lime leaves. This can help enhance the aroma.

After a long, harsh summer, the first rain of the wet season means that you'll have some young kaffir lime leaves to soon accompany your nam prik. Pluck those leaves off the branch, and blanch or stir-fry them lightly. This accompaniment is delicious and doesn't take long to chew.

As you might see now, kaffir lime fruits and leaves are incredibly versatile. If you choose to grow lime in your own garden, you might as well grow some kaffir lime too. You will thank yourself every time -- and there will be many times -- when you reach for some zesty kaffir lime fruits.n