Unfolding Kafka Festival 2017 ended in Chiang Mai on Sunday. This year, under themes of gender identity, animals and folding and unfolding of the body and objects, the festival's performing arts programme doubled in size. Life reviews all the seven performances presented in Bangkok. 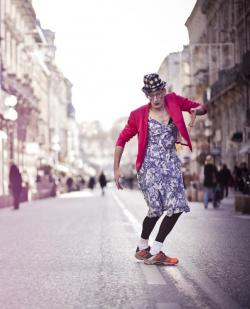 I expected this street performance to be funny. Maybe the performer (Pierre Pilatte) would gently tease or embarrass the audience and pedestrians. Be Claude did all that but was also generous, joyous and moving. Written by Jean Cagnard and directed by Sophie Borthwick, the piece made the audience follow Claude on foot -- through Sathon 1 on the first day and Silom Road on the second -- as he explored and responded to the calls of his feminine side. He imitated the many ways the female audience members walked and held their bags, thrust his face into our faces, and interrupted street traffic. Like a lot of queer theatre, Be Claude was about the courage to be oneself. Unlike a lot of queer theatre, it portrayed the process of self-exploration and transformation as a celebration, not a struggle. What makes Be Claude political was the way Claude inserted his physical presence into the personal and public space -- in full, joyous force.

Inspired by Kafka's short story A Report To An Academy, Jitti Chompee's latest dance delighted with a naughty sense of humour. Jitti's works have never been conceptually strong, but his choreography has shown marked improvement. For the first time, Jitti seamlessly combined Thai classical dance with contemporary dance. His intention may not be to subvert the sacred status of the dance form, but it was used in a playful, cheeky and homoerotic way. The classical form felt as one with the rest of the choreography instead of a random, exotic insert like before. The first two sections of the piece were funny and engaging. In silence, the dancers performed with their backs to us, their masks worn backward to face the audience. Sometimes their bodies tangled with one another. But then the piece strayed and lost its way. Khon dancers Anucha Sumaman and Benjamin Tardif were especially riveting to watch -- Anucha with his sensual grace and Benjamin with his nimbleness. 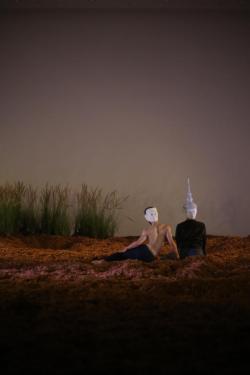 Sweden-based Japanese artist Satoshi Kudo placed Norwegian twin sisters Anna and Berit Einemo Froysland in an all-white space, the sisters' pale skin and hair almost swallowed up by the room. The performers navigated around the room in small, quiet movements. Sometimes one of them fell as the other caught her without righting her. What interests Kudo is not stability. He even developed his own movement theory and method called Motion Qualia, which challenges dancers to find their way out of the moment of physical instability. Here, he also explored polarity and unity. The twins spent most of the performance in opposition -- strained smiles, ominous mumbling and high-pitched singing against silence -- before their bodies joined into a two-headed creature in the end. This strange and beautiful piece may not have been very enjoyable, but its eerie and emotionally taut atmosphere captivated.

French dancer Benoit Couchot's body -- long, bony, delicate and strong -- defies neat gender labels. Clad in skintight skin-coloured shorts and top that leave his limbs and most of his torso bare, Chouchot danced with vulnerability and raw energy in the low-ceilinged basement of the parking lot at the Rose Hotel. The title of the piece means "boy or girl" in Basque. He made us see and unsee his body in motion by occasionally disappearing into the wings before strutting out again as if daring us to pin down his body and identity. At times he was still or languorous before bursting into frenetic and convulsive movements heightened by the music and glaring lights. Despite the feeling of fear the piece sometimes evoked, this was an assertive and powerful performance.

Some performances are just plain fun to watch. S20 founder Hiroaki Umeda's 2011 solo piece was an intense and spectacular visual and aural experience. While it is beautiful to watch Umeda move fluidly among the black-and-white static and the moving dots and lines, it was his sound design -- bold and potent -- that stirred up the butterflies in my stomach and quickened my pulse. The piercing sound that sometimes follows a brief silence jarred the senses. Umeda constantly played with opposites -- silence and sound, darkness and light, motion and stillness. On stage, the artist existed as an equal to his visual and sound designs. He did not control or respond to them. He moved with the sound and the dots and lines. He appeared and disappeared with them as if he, too, were digitised.

These two pieces by Israeli dancer-choreographer Roni Chadash were the most concise and potent dance performances I've seen in years. In No-body, Chadash performed on the back of a pick-up truck in the basement of the Rose Hotel parking lot. At first, she moved from one sexually suggestive pose to another. She looked self-possessed and in control. Then she lay down, her head disappeared from sight, her body moving in resistance to an invisible force -- legs pried apart, rising chest pressed down, crotch and inner thighs grabbed. In making us watch a female body -- human identity erased -- fight and succumb to something more powerful than itself, Chadash brought sexual violence to the eye level and forced us to face an objectified and violated body. That's also the kind of female body we saw in Goofy -- faceless and powerless, an object not a subject. In Goofy, the female body was bound by another invisible force -- oppressive social expectations. The body here was also a stand-in for stifled voice and ambition. It flailed, tried to reach high and struggled to stand up. Chadash's choreography was intelligent and visually arresting. And she's an artist who dares to be tough with her audience.