It's all in the stars
Life
Social & Lifestyle

It's all in the stars

Months of kitchen rumours, speculations from experts and chef anxieties are finally over.

It's official which dining establishments are -- and are not -- studded with the stars in the inaugural Michelin Guide Bangkok, now that the world's longest-running and most revered hotel-and-restaurant guidebook announced its debut selection of Bangkok's best restaurants on Wednesday.

A total of 20 stars were awarded to 17 eating establishments in Thailand's capital city. 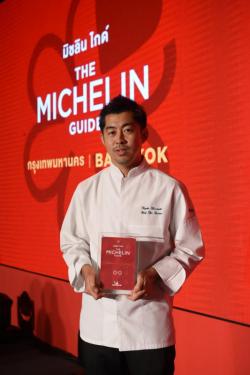 Fourteen restaurants obtained one star, while the other three got two stars. No three-star awards were granted in this first edition. Despite rumour and anticipation, only one "street-food" restaurant was honoured, while the rest were fine-dining venues.

Much expected by an ardent crowd of international food celebrities, restaurateurs, epicures and journalists, the two-star selections include Le Normandie French at the Mandarin Oriental Bangkok, Gaggan Progressive Indian in Soi Lang Suan and Mezzaluna on the rooftop of Lebua.

"We are truly honoured to receive the award. But it won't change who I am or how my team tries to achieve. Our food tomorrow will be the same as it was yesterday. The only thing that has definitely changed is the diners' perception," said chef-patron Gaggan Anand of Gaggan. (The restaurant currently ranks number seven on the World's 50 Best Restaurants, another much-cited list.)

Arnaud Dunand Sauthier, chef de cuisine of the two-star Le Normandie, said: "This accomplishment really is the pinnacle of my culinary journey. As the only two Michelin-starred French restaurant in Thailand, this prestigious recognition serves to motivate myself and the team to strive for excellence even more. I am so proud of my team's accomplishment."

Names include Nahm (its original outlet in London was in 2001 was the first Thai restaurant in the word to get a Michelin star); J'aime by Jean-Michel Lorain (Lorain's six-decade-old family-run restaurant in Burgundy, France, boasts three stars); L'atelier de Joel Robuchon (this will be the 32nd Michelin star for Robuchon's empire), Savelberg by Dutch chef Henk Savelberg, whose outlets in the Netherlands, from 1982-2014, fetched several Michelin stars); Sra Bua by Kiin Kiin, whose 11-year-old flagship location in Copenhagen, Denmark has one star; and Bo.lan Thai restaurant by chef Duangporn "Bo" Songvisava, voted 2013 Asia's Best Female Chef.

Sühring, although opened less than two years ago, was anointed with a star. It is the only German restaurant in Asia to receive the honour. 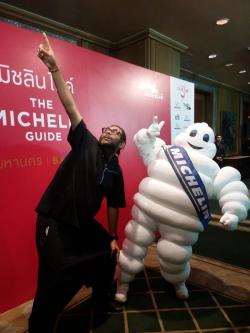 Jay Fai -- real name Supinya Chansutta -- a famous 70-year-old shophouse eatery offering homespun yet astronomically priced dishes such as omelette and fried noodles, is now an official holder of the globally lauded star. Its inclusion is the only huge surprise in a list dominated by fine-dining venues.

Thailand is the fifth Asian country, following Japan (Tokyo and Kyoto-Osaka-Kobe editions), China (Hong Kong-Macau and Shanghai editions), Singapore and South Korea (Seoul edition), to have its own guide.

The Bangkok edition is the result of a partnership between the Michelin Guide and the Tourism Authority of Thailand. The annual publication was expected to help boost the country's tourism industry and optimise Bangkok as a world-class culinary destination.

Michael Ellis, Michelin Guide's international director, said: "We are proud to launch this first selection of The Michelin Guide dedicated to Bangkok, highlighting the richness of the city's gastronomy.

"Our inspectors were thrilled to find a local culinary scene with an amazing vibrancy, myriad new restaurants and an astonishing variety of wonderful street food, but also Thai cuisine served in different forms."

According to guide officials, the rating system follows a very strict protocol, with anonymous inspectors who have an extensive background in the culinary arts. Inspectors have to undergo meticulous training and pass rigorous tests to qualify for analysing the dining experience.

On-the-job meals are paid for by the company and inspectors are not allowed to reveal their status to the restaurant. 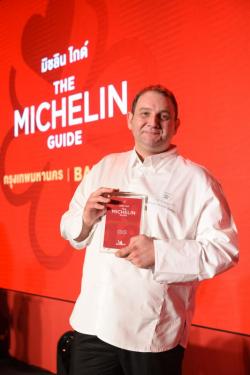 However, as stated on The Michelin Guide Thailand Facebook page: "Different members of the team may at times identify themselves in order to conduct technical visits, on which they obtain up-to-date information and press materials such as menus and photographs from restaurants and hotels."

Restaurants can be awarded from one to three stars, based on five basic criteria: quality of product, mastery of flavour and cooking techniques, personality of the chef represented in the dining experience, value for money, and consistency between inspector visits.

Restaurants awarded one star are officially defined by The Michelin Guide as "establishments that use quality ingredients and serve carefully prepared dishes with distinct flavours", regardless of their service and atmosphere.

Two stars means the restaurant is excellent and worth travelling for.

And three stars means the restaurant offers an exceptional gastronomic experience truly worth a special journey.

The stars, re-evaluated every year, are officially given to establishments and not chefs. The only person who may legitimately claim the star as her own personal accolade is the head chef or chef-owner of that particular rating year.

The Michelin Guide Bangkok 2018 features a total of 35 restaurants awarded the Bib Gourmand. The award recognises favourite establishments selected by the Michelin inspectors for their value for money. 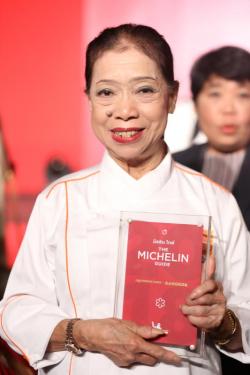 It is apparent -- and official -- that the arrival of the internationally acclaimed food bible was basically to help augment Thailand's revenue by making Bangkok even more attractive for food-driven tourists.

An astounding numbers of keen local epicures and food critics are now heavily questioning the credibility of the century-old guidebook. And many discerning gluttons are announcing relief for their beloved eateries not being listed.

"High-profile recognition can do so much to an establishment -- good and bad," a veteran foodie said.

"I've lately stopped dining at some of my long-time favourite restaurants simply because they're packed with tourists quick to follow the famous guidebook. Dining there is never as pleasant as it used to be."

The Michelin Guide was launched in 1900 to encourage people to travel long distances by car (using up their tyres in the process) to restaurants and hotels across France. The book included reviews of restaurants by the company's undercover full-time reviewers.

The first non-European edition was launched in 2006 for New York.

The 2007 Tokyo guide represents The Michelin Guide's arrival in Asia.

Currently, the guide covers more than 100 cities in 30 countries across five continents.

In each city, the guide may recommend as many as 600 restaurants, only a handful rated with the stars.

Restaurants do not, and cannot, pay to be listed in the guide.

For various reasons, The Michelin Guide may cease publication in certain cities.

The next city to welcome a Michelin Guide will be Taipei.

How The Michelin Guide Bangkok is organised

The Michelin Guide Bangkok is basically a list of recommendations. Besides the much-ballyhooed one- and two-star honorees, the guidebook lists nearly 100 eateries, stalls and restaurants grouped into several categories.

Earlier this year, the Ministry of Tourism and Sports signed a contract with the French company to survey restaurants and eateries in Bangkok for a budget of 144 million baht spanning five years, with the intention of promoting tourism. The first guidebook will be available for purchase at 650 baht, and four more will follow every year until 2021.

The red-covered book opens with an introduction of Thailand and Thai food. One article is titled “Quintessential Ingredients”, which is basically Thai Food 101 aimed at international readers. (“The country’s bounty of lush flora and fauna has long been a draw for the eyes and nose, but innovative chefs are now using them to tantalise the tastebuds of diners in the ‘Land of Smiles’. ”)

While international chefs and sophisticated dining dominate the starred entries, the guide includes affordable Thai food, including street stalls, in other sections.

The four sections of listings in the guidebook include:

Explained as “Good quality, good value cooking”. Thirty-five places have been selected, mostly Thai restaurants. The list ranges from the homely Arunwan, Baan Somtum and Jay Oh, to the more formal Soul Food Mahanakorn, Than Ying and Ruen Mallika, and also includes many street eats, such as Polo Fried Chicken and Yentafo Convent.

Explained as “Fresh ingredients, capably prepared: simply a good meal”. The 65 restaurants in this category are eclectic. For instance, Celadon at Sukhothai and Erawan Tea Room are in five-star hotels, while Je Ngor and Baan Khanitha are more family-style places with multiple branches. The list includes Thai, Indian, Italian, Japanese and other international cuisines.

Explained as “a selection of quality street food”. This is a new category for the Thai guidebook and it lists 28 street-eat places, from streetside stalls such as Pa Tong Go Savoety in Chinatown, Peng Kua Gai in Suan Luang Market and Joke Prince in Bang Rak. Some of the street-food recommendations are also on the Bib Gourmand list.