A view on the new zoo
Life
Social & Lifestyle

A view on the new zoo

Dusit Zoo, for 80 years a proud part of Bangkok, is soon moving to Pathum Thani, and the jury is out as to whether that's a good thing

When news broke last month that Thailand's oldest zoo, Dusit Zoo, will be relocated from its present location in inner Bangkok to a new home in Pathum Thani province, it sent shock waves through the hearts of generations of Bangkokians. Back before shopping malls, cinemas, skating rinks, aquariums and wax museums took over as the capital's popular destinations, Dusit Zoo was a favourite attraction for the entire family -- a place where countless such families have had their photographs taken.

Also known as Khao Din, Dusit Zoo was originally built by King Chulalongkorn as a private garden adjacent to the Dusit Palace. In 1938, the government asked for King Rama VIII's regency council to open this park as a public zoo. The zoo was then under the operation of Bangkok City Municipality, before the Zoological Park Organization (ZPO) took over in 1954. Today, the 118-rai zoo -- the land belonging to the Crown Property Bureau -- is home to over 1,600 animals. It attracts an average of 2.5 million visitors per year.

The move to Pathum Thani is set to occur sometime in 2019. The ZPO has since set up two committees to handle planning for the new zoo, as well as to oversee the moving process of both the zoo itself and the ZPO headquarters. The new Dusit Zoo will use a 300-rai space -- a land bestowed to the ZPO by HM King Maha Vajiralongkorn -- to develop a modern zoo that will serve as a place for both leisure and learning, for people of all ages.

What touched most people when news of the move arrived was not just the loss of the city's oldest zoo. It was the memories so many associate with the place, which remains popular and has also acquired a quaint nostalgic charm.

In the past month, many have been visiting the zoo for what could possibly be their last time.

Patchapa Phetphum -- a 35-year-old employee at a design company -- has been one of the zoo's fans since she was young. She recalled going to the place to look at animals with her parents as a kid. So when word came that Dusit Zoo would close and relocate, she didn't hesitate to bring her own three sons to the place before they don't get a chance to.

We met outside a photo shop where visitors could get their photo printed onto a plate or put into a frame as a keepsake. Patchapa got a picture of her and her sons printed on a small plate for 99 baht.

"When I was a kid, my parents brought me here and we got a photo on a plate just like this too!" she laughed. "It's a piece of memory I can put up at home. Even when this place will be moved in the future, I'll have something to remember it by -- that I once came here with my sons."

Her young sons took turns sharing their favourite things about the zoo: snakes, tigers and crocodiles. As a mother, aside from the fact that she's also fond of nature and animals, Patchapa finds the place an affordable choice for spending a day outside with the family. The zoo's ticket for adults now costs 100 baht, and it's 20 baht for children.

Places similar to Dusit Zoo that the family have been to include Khao Kheow Open Zoo in Chonburi and the Chiang Mai Zoo. Patchapa opines that there isn't really any other place in Bangkok similar to Dusit Zoo -- where visitors can spend their day among the greenery and wild animals.

She added that she's quite open to the idea of the relocation if it means improvements, and more space and better treatment for the animals.

On the contrary, office worker Chonlada Krachangsri, 43, said she's not too sure about the relocation, feeling that going all the way to Pathum Thani may just be too far. She recently brought her two-year-old niece to the zoo, saying the young girl is really fond of the place.

"It will be sad to see Dusit Zoo go," Chonlada said.

The eventual move won't be affecting just the visitors alone, but also the staff. Khoo Deeduaysakul, 70, a photographer at the photo shop who has been working at Dusit Zoo for over four decades, said the zoo is like a second home to him. He has been photographing generations of families that have come through the gates. Patchapa's family photo was also taken by him.

"I've been here since the time when we used a film camera, taking photos in black and white, not a DSLR like this," he said. The shop also has on display different models of vintage cameras in the front.

Business at the photo shop has been dwindling over the past several years, ever since technology began allowing phones to take photos, said the photographer.

"We're able to survive at all only because these plates have got Khao Din's name plastered on them. And now that Khao Din will be no more in the future, more and more people have been getting them as memorabilia," Khoo said.

As he spoke, Khoo began pointing around to the overhead skywalks that now link different attractions. A recent addition was made, he said, and several animal pits were also improved. About 10-20 years ago, the zoo also introduced a hop-on, hop-off tram that takes visitors around the zoo for 25 baht.

"It'll take years before the new zoo can be built up to match, let alone exceed, Khao Din as it is now -- both in its condition and its value to the people," said Khoo. One of the main advantages the zoo has is its location, which is very convenient for city dwellers to travel to -- with buses, tuk-tuks and taxis available. Khoo suddenly wondered aloud how much it will cost to hail a cab to Pathum Thani.

"In Bangkok, if not Khao Din, then where else? Pata, maybe? That's the next closest thing we have to a zoo around here," he said.

The photographer anticipates that the move could begin at the end of 2018, with some animals being relocated first to other zoos while the new one is being constructed.

At this point, Khoo is unsure whether the photo shop will be following the zoo to its new home. He said the decision is entirely up to the shop owner.

"If the boss is going, then I'll go too," he said. "I'll definitely miss this place. Everybody will. We grew up with it."

As we bid farewell, Khoo told us to also check out the bomb shelter located not too far from his shop.

Aside from animals, Dusit Zoo's compound also housed some historical architecture such as a World War II air-raid shelter, built in 1941 to protect zoo visitors and people living nearby from flying explosives. There's also a vintage building with stained glass built during the era of King Rama VII that has won the Architectural Conservation Award by the Association of Siamese Architects in 2002. The building now houses Dusit Zoo Gallery, which displays rare photos of the zoo.

At the centre of Dusit Zoo, surrounded by a lake, is a traditional Thai-style pavilion that was once a resting area for King Rama V.

It's unclear what will happen to these establishments once Dusit Zoo is relocated. 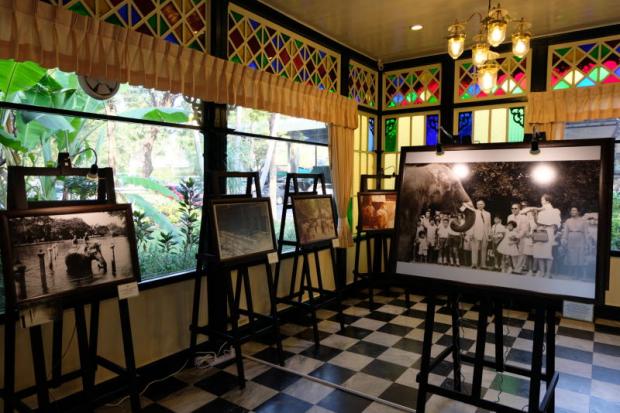 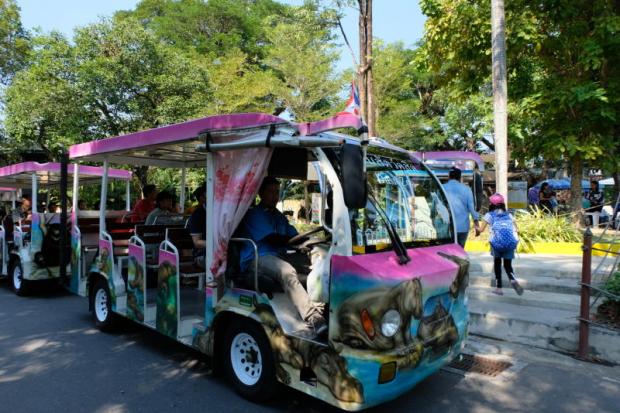 The hop-on, hop-off tram is a convenient means of exploring the zoo. Melalin Mahavongtrakul 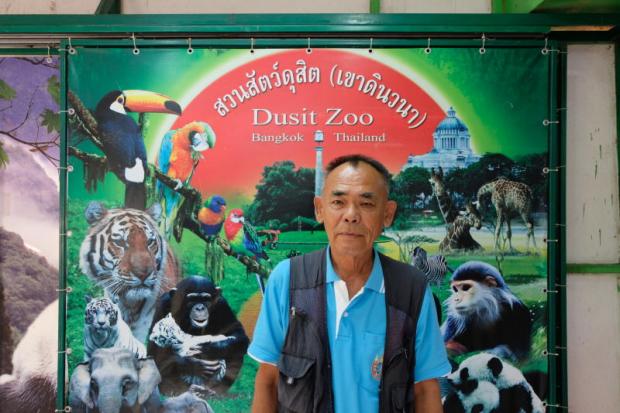 Khoo Deeduaysakul, a photographer who has been working at Khao Din for over 40 years. Photos: Melalin Mahavongtrakul 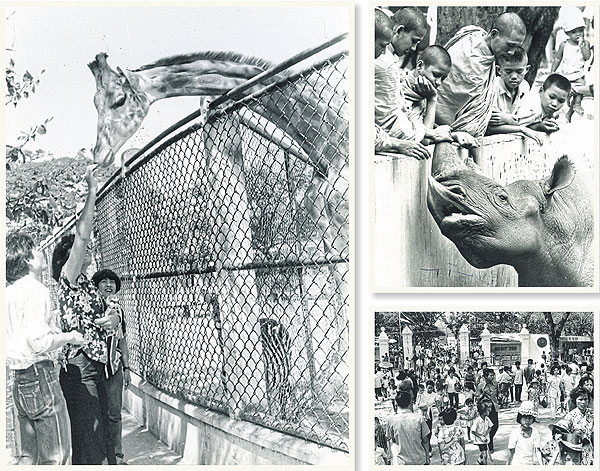