Patcharavipa's first flagship store is a mixture of cool sophistication and understated beauty, just like its namesake founder

A step into Bangkok's latest fine jewellery flagship store does not involve upholstered chairs, velvet-lined display cases and plush, crystal lighting fixtures. At Patcharavipa, the earth-toned archaeological plaster floor and walls offer your first feel of the brand's organic characteristics, while the space is sparsely dotted with what looks like slick, rectangular blocks of dark concrete that house the jewellery pieces.

"I wanted it to feel a bit surreal, like stepping into a quarry," says the founder and eponymous designer of the brand, Patcharavipa "Pat" Bodiratnangkura.

It may just be the most refined, tidiest and well-lit quarry ever. And there's a few delightful surprises the store has up its sleeves that is sure to make one smile, despite its raw first impression and seemingly stark bareness.

"I like marble and concrete, but here, it fools you," Pat explains of including the unexpected in her store concept. The concrete cases are actually made of foam and are soft enough to sink one's head into. The brown armchairs by the minimalist teakwood table are coarse and immaculate at the same time, without a single stitch out of place, even though they are made with rough natural leather -- in its pre-dyed stage before it gets turned into a handbag. It's not a sentiment or aesthetic typical of a traditional fine jewellery store and the pieces that she designs also follow suit.

When Patcharavipa was internationally launched in 2016, her Tushroom collection showcased what you don't usually see in this market segment and price range: bangles with stalactite textures that were smooth to touch; fluid, unstructured earrings; and rings with an alien feel to it all, thanks to the imaginary union of a tulip and poisonous mushroom that inspired its sensual volume and bold shape.

The Classic Fingercon ring and Boldi Tushroom ring popularly remain as the brand's image anchor, while the Tiny line of zodiac necklaces are still the best-selling items around the world. From the US (Jeffrey New York), London (Dover Street Market), Hong Kong (Lane Crawford) to Bangkok, the universal and wearable appeal of her tiny animals are continuously restocked, possibly for their affordability at 21,500 baht a piece.

"We made it really guanteen [cheeky] because it's like 1cm and it's really minuscule," she explains with a smile. "The craft is really, really small -- imagine the handiwork that goes into it. People like to buy them as presents."

The workshop where everything is made in-house, sits behind the main gallery. Although precious materials and stones are used, it is their textures, forms and natural imperfections that Pat is more interested in, rather than their value. The uncommon also finds a footing in her roster and coconut shells are fashioned into rings in her Coexistence collection. Home deco objects make use of these coconuts too and elevate them to breathtaking treasures, with spinel gemstones embedded inside and 9k gold structures framing the shell.

"My grandparents met at Amphawa and saw coconuts only come from there. Collectors collect my [home deco] pieces because they are very hard to find," says the 26-year-old.

It becomes apparent that Pat's uncommon and unique shapes stem from her own long-standing interest in jewellery as art pieces.

"I like to look at antique jewellery and how it's creative and decorative," she says. "It's something unnecessary, but it adds beauty to a woman. It's like having a mini sculpture with you. The woman that would like Patcharavipa is quite sophisticated and she understands jewellery in another way -- as a decorative art. My very first stockist in 2016 was Ikram in Chicago. It's a concept store by this woman who is so cool -- she collects Commes des Garcons and Yohji [Yamamoto]."

A long stint of studying in the UK and graduating from Central Saint Martins School of Art and Design in London has shaped Pat's effortless style. As the youngest granddaughter of the Park Nai Lert clan, she is regularly seen in the spotlight, always looking refined and expensive even though wearing the most unadorned looks. Her jewellery is just like her: it does not beg to be seen, but evokes an understated beauty and sophistication. She may be better known as a society staple, but what has remained a solid constant is her interest in designing jewellery. Back in 2012, she had collaborated to design unbelievably light feather-shaped earrings out of titanium with Swiss haute jewellers Adler Joailliers, but her hands-on crafting ordeal dates back to when she was 13, where she recalled designing costume jewellery for fun.

Today, it is a full-time job as she jets between Bangkok and London, where she is based. As Patcharavipa works its way with staying put, the promising designer also hopes to delve more into fine jewellery for men.

"So many people focus on jewellery for women and no one does anything for men at all! When men wear jewellery, it doesn't mean they're gay. Finding stuff for your boyfriend, brother or father is such a difficult thing. I love men's jewellery and so we're starting to do more menswear now."

She gleefully shares that her elder brother wears her pieces and the Tushroom pieces currently in stores could be well worn by men. Patcharavipa is driven by the spontaneous and the wearable unpredictable, but in her SS18 collection, Gingko Metrics, she admits that she has brought in geometric structure never before seen in her brand. The patterns of a gingko leaf are embedded onto symmetric hexagonal shapes, making for something that is perhaps a bit more commercial and easier to wear. Still, it pays to follow one who knows her gems but has always been stylishly practical.

"I was born to design, but it needs to be practical. My stuff isn't cheap and if you buy it, you should be able to wear it, not put it in a safe."

For the subtle sophisticates of Bangkok, now you know where to head. 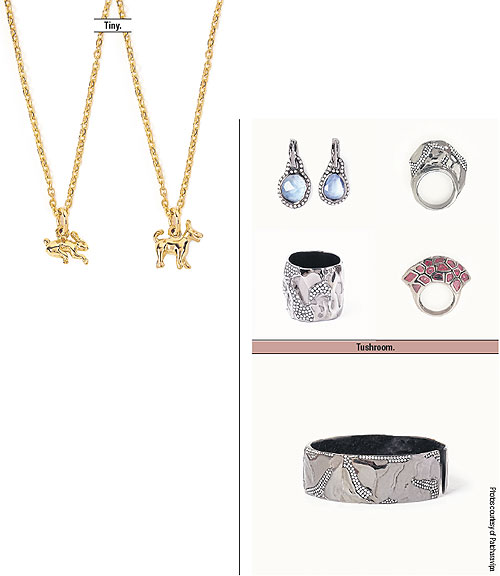