The Digitisation of Northern Thai Manuscripts Project, supported by the German government since 2013 and successfully concluded last month, inspires locals to conserve old manuscripts themselves

At Wat Sung Men in Phrae province, monks and a dozen local villagers are busy scanning the temple's old manuscripts into a computer. The same activity, in fact, is happening at several temples in the North, including Wat Phra That Si Chom Thong in Chiang Mai as well as others in Lamphun and Nan. Initiated by a German professor, the novel efforts of digitising and conserving ancient manuscripts have caught on with enthusiasm among locals.

All these projects are the fruits of over four decades of hard work by Prof Harald Hundius, the Digital Library of Northern Thai Manuscripts (DLNTM) local project leader. Centuries-old manuscripts at numerous northern temples, including Wat Phra Singh, Wat Chedi Luang, Wat Phra That Si Chom Thong and Wat Duang Dee in Chiang Mai, Wat Sung Men in Phrae and Wat Lai Hin in Lampang, have been registered and conserved. The DLNTM project was successfully concluded on March 28 this year in the presence of German ambassador Peter Prügel.

"We are very proud that with this long-time intervention by German Prof Hundius and his team, we were able to contribute to the establishment of the Digital Library of Northern Thai Manuscripts. It contains more than 6,000 formerly inaccessible documents now digitised on the internet, so that researchers and the general public can access them from their smartphones or computers around the world," Prügel said.

The German Cultural Preservation Programme (CPP) was established in 1981 in support of the preservation of cultural heritage across the world, focusing on providing assistance to countries where there is an immediate threat to cultural property and heritage sites. Since then, the CPP has supported some 2,750 projects in 144 countries with a total of about €70 million (2.7 billion baht).

Throughout the last 37 years, Thailand has been a privileged partner of this programme with a large variety of projects, including the compilation of Lanna stone inscriptions, the restoration of Wat Suthat, the publication of traditional Thai literature, a workshop on crafting musical instruments, and consultancy on ceramics pottery as well as the Wat Ratchaburana Safeguarding Project in Ayutthaya. Overall financial support for these projects in Thailand adds up to approximately €1.8 million.

"The German government has been supporting the project since 2013 and we are proud to have contributed to its successful completion. It is the last chapter in a long history of German assistance in support of research and preservation of northern Thai literary heritage, beginning more than 400 years ago," the ambassador concluded.

Project leader Prof Hundius is content with the project. "Since 1992, we have digitised thousands of old manuscripts. Some disappeared from the temples. Under this project, about 6,000 have been preserved, digitised and added to the website LannaManuscripts.net. Some 1,800 of about 4,200 manuscripts found were digitised in the past few years," he noted.

David Wharton, the technical director and manager of the project, recalled that the recent project in the North took 31 months in the past four years in 40 temples and involved 6,000 manuscripts.

"We came here from time to time to supervise the project, which is extremely valuable and well-received by the locals who respect the manuscripts. I feel the sense of collaboration," he said.

According to him, the German support was for conservation and dissemination. There was also collaboration from Chiang Mai University, to which the survey record is valuable.

Despite the importance of the project, the team found there are still many more temples with valuable manuscripts, and there is a lot more work to be done.

"One-third or even half of all the surveyed manuscripts have been lost during the past 39 years. That is shocking. They were damaged by fire, termites or floods. Uncertainty surrounds these temples. It's not intentional destruction but the lack of awareness. We see temples which take very good care of them, though. It's a very important issue," Wharton said. "The most strength of the project is to set the foundation for future similar projects." 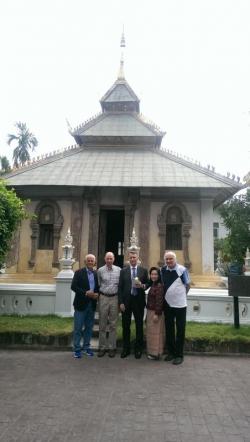 Ubonphan Wannasai, a local academic and daughter of the late northern-language scholar Singkha Wannasai, has been working with Prof Hundius for over 30 years. She is happy with the way the project inspired locals to conserve old manuscripts themselves.

"After the completion of the project, we are capable of continuing the conservation ourselves because we have our own communities, manuscripts and language. It is not difficult to do it if we create people's awareness. We have tried to talk to local villagers. Even monks are interested. We first choose the elderly to join because they have free time to help copy old manuscripts -- one to two pages a day. They will be gradually able to write the Lanna language and their children and grandchildren will become interested and want to join. We tried last year in Mae Chan district, Chiang Rai," she said.

According to her, Prof Hundius's team decided to support Wat Sung Men in Phrae to become a role model after the monks and more than 10 local villages wanted to continue the digitisation and conservation of the temple's old manuscripts on their own after the conclusion of the German project.

"We taught the temple's team about the photo-taking and image-importing methods and showed them how to do this, and they learned about this. There, the monks and more than 10 disciples and local students have been digitising the manuscripts since late last year. The temple is famous for its many old palm-leaf manuscripts. Many other temples consider them a role model," Ubonphan added.

Another fine example is the digitisation of the old palm-leaf manuscripts and the making of new versions to replace damaged ones at Wat Monthian in Nan after a flood. The project, initiated by academic Somjet Wimolkasem, took 16 months and was completed in February this year. The villagers worked together to cut, boil, sundry and prepare palm leaves before inscribing Lanna letters on the leaves. A palm-leaf manuscript museum will be opened at the temple in the future. The villagers also study the Lanna language regularly with the aim of reviving the art of making palm-leaf manuscripts and writing the Dhamma Lanna letters.

At Wat Phra That Si Chom Thong, Phra Maha Prasert Siripunno and some villagers continue what the Prof Hundius-led team did in 2016. The monk, who can read and write the Lanna language and make manuscripts of palm leaves, facilitated the German-led team's work by reading, categorising and preparing the old manuscripts for digitisation.

According to him, interested temples can digitise their manuscripts themselves with permission from abbots. Digitisation will keep the digital version of manuscripts safe for good.

"The digitisation is good and I am willing to give advice on categorising manuscripts. I am not an expert, but know how to sort and photograph palm-leaf manuscripts at a certain level," the monk added.

Ubonphan concluded that the German-led project allows people to study Buddhism anywhere from the digitised versions of old manuscripts, which is a way to support Buddhism, while keeping the original versions safe. In addition, the project is practical and applicable by interested persons and can stimulate the new generation's awareness.

Technical director and project manager Wharton said: "Who is actually responsible for the preservation? It relies on awareness and local and individual interest. We hope to see national databases of manuscripts. We hope to see solutions. We stress in the importance of literary heritage." 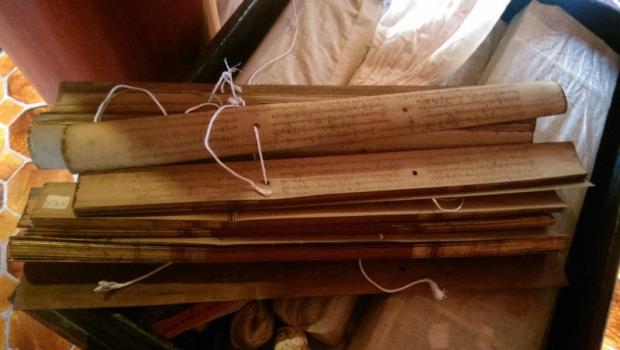 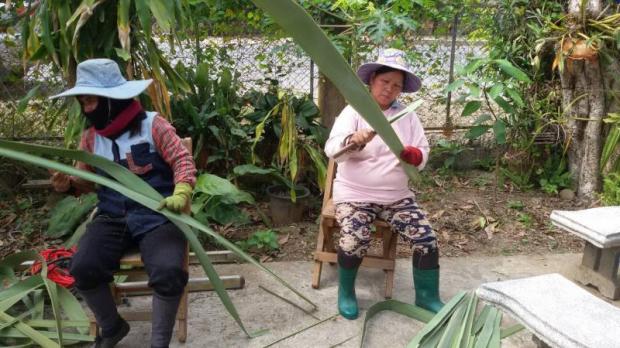 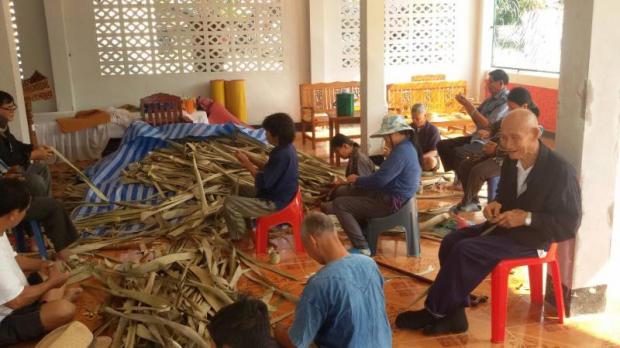 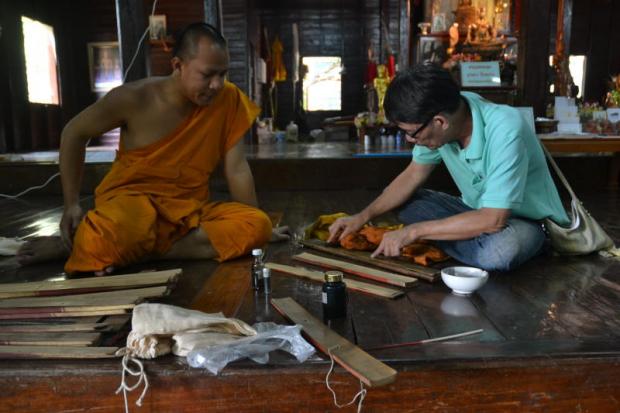 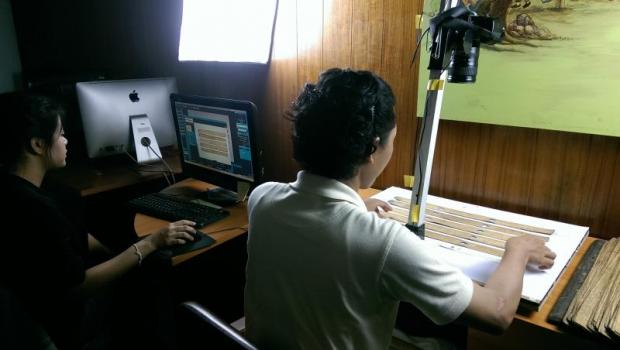