The art of being 'greng jai'
Life
Social & Lifestyle

The art of being 'greng jai'

An admirable quality can be a hindrance to progress, a shield to hide reluctance or even cowardice By Andrew Biggs

Happy Songkran, dear reader! This is the traditional time I close the windows, draw the blinds and remain ensconced in either my bedroom or, when I'm feeling adventurous, the living room for three whole days.

I've been through all the Songkran stages. I've stood on the back of a pickup with 18 others, splashing water from giant barrels while zipping through the streets of Chiang Mai. I've sat on bamboo mats pretending to enjoy local rice whisky as wizened drunks relate interesting anecdotes three times over.

I've also sat in horrendous traffic jams extending all the way from Bangkok up through Saraburi to Nakhon Ratchasima.

I have reported live on TV from Sukhothai one year; another year from Nakhon Ratchasima dressed in traditional Thai garb.

I've danced in the middle of Silom back in the days when Songkran was fun there. I've even been an emcee, five years running, at the Khaosan Road Songkran Festival, standing on a stage as drunken crowds of Western tourists shot streams of water from their water guns directed straight into my crotch.

There are limits to how many times one can be soaked by total strangers for three relentless days. Participating in Songkran festivities for the first time is a little like losing one's virginity; it's sloppy and exciting and life-changing. After that, well, there are only so many positions and variations one can explore before the thrill wears off.

Every year in the lead-up to Songkran, the government implements campaigns to get Thais to stop chucking buckets of water over strangers like they're on fire.

This may come as a surprise, and disappointment, to new arrivals, but the culture of dousing strangers with jets of water from high-powered water guns is a relatively new one.

The proper way to dispense water is a soft and delicate process, pouring water from a small cup over hands or a shoulder, at the same time giving a blessing to that person.

This year the government campaign is stressing being respectful and having greng jai in your behaviour over Songkran.

Greng jai? Now we've opened a can of worms.

See, dear reader? As I try to explain this feeling, I am sucked into the quicksand of English vocabulary. The closest word to it is "consideration", but even that seems a little flaccid -- another dreaded adjective for anybody who's been here three decades.

I once wrote an entire book entitled What Does Greng Jai Mean In English? which sold nearly 100,000 copies. It paid off a significant part of my mortgage. It's still in book stores to this day, though these days it is more like to pay off a single bottle of Uncle Smirnoff over the Songkran break.

Greng jai is a nice thing, but it has its dark side. Greng jai turns you into a caring, thoughtful human being -- it can also transform you into a directionless jellyfish.

I used to play squash with a colleague whose nickname was "Eddie From Hell". One Wednesday I was sitting at my desk and saw him running down the corridor on his way home when I said: "See you tomorrow at 9am for squash."

Eddie From Hell stopped. Looked at me. Opened his mouth. "Maybe," he said. And ran off.

"Eddie!" I screamed and he stopped in his tracks. He came back. "Siddown," I said in my best John Wayne accent, and Eddie from Hell sat down reluctantly.

"You're not coming tomorrow, are you?" I said.

He ummed and ahhed and spoke in every tangent other than direct. Finally he said: "My mother is arriving from upcountry tonight, and I have to take her to the hospital tomorrow morning."

"So," I began, realising the futility of even asking, "Why didn't you tell me you wouldn't be able to make it?"

Eddie From Hell looked at me and, true to his name, replied: Greng jai.

Greng jai. He didn't want to say: "I can't come tomorrow morning," because he was considerate of my feelings. He didn't want to upset me, so it was easier just to leave me like a shag on a rock at the squash court the next morning.

This incident happened many, many years ago but it always stuck with me. As did this one:

We had a new show on TV. The process was simple -- we filmed the show, edited it, sent it to me to check the English graphics, changes would be made, then we sent it to the TV station. I told my assistant producer the new process and he understood clearly.

We filmed the first episode. My assistant producer, whose nickname was Chicken, went away and edited it. He sent a copy to me to check, and sure enough, there were 10 mistakes.

Chicken sat down with a pen and paper and jotted down the mistakes as I went through the tape with him. Spelling mistakes, graphics in the wrong colour, extra words to be added -- the usual stuff. He nodded wisely and wrote furiously.

At the end I asked him the fatal question: "How quickly can you get these changes done so we can send this to the TV station?"

You did what? The fact he had sent it already was bad enough. But the guy had sat there for half an hour writing down the changes he knew all along he wouldn't have to make. "Why didn't you tell me in the beginning before we wasted all this time telling you to make the changes? Why, Chicken? Why?"

So that's the conundrum. Yes, greng jai is an admirable quality because it shows your concern for others, not to mention being brought up correctly. But it also can be a hindrance to progress, or a shield to hide reluctance or even cowardice.

And while Thais pride themselves on their greng jai-ness, I sometimes wonder if they are navel-gazing with rose-tinted glasses. There ain't much greng jai during peak hour traffic on Bangna-Trat highway, I can tell you. And look at all our high-ranking military, civil servants and politicians bleeding the public coffers of government budgets at figures of up to 30%. There is no greng jai when it comes to corruption. Nor, as it appears from the recent campaign, are we very greng jai around Songkran.

These days when I won't arrive for another hour I tell my workmate I'm "10 minutes away". When my delightful Brunch editor calls me in the morning for my column, I tell her she'll get it within the hour and then, later that night, I start to wonder what I will write about when I start on it the next morning.

This is the key to living harmoniously in Thailand. You don't have to be responsible for your actions. You don't even have to act! You just have to be greng jai of everybody -- except for those drunken idiots splashing you with water. Happy Songkran, dear reader! 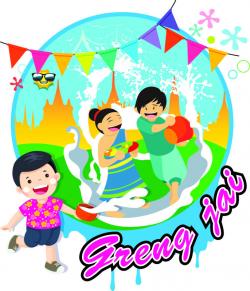