Canadian Blake Dinkin is the creator and owner of the world's rarest and most expensive coffee, refined naturally by elephants — Black Ivory Coffee. Partnering with Ban Taklang in Surin and the Golden Triangle Asian Elephant Foundation, Dinkin produces "elephant dung coffee". However, production of Black Ivory Coffee provides valuable income for elephant care-giving families, as well as students who are taught how to wash and dry the coffee. The mission of Black Ivory Coffee is to take a negative situation, namely human-elephant conflict and turn it into a positive one by creating a luxury product that helps not hurts elephants, as Dinkin tells Guru.

How did the idea for using elephants to filter the coffee beans evolve?

I was working with civets in Ethiopia in 2003 when civet coffee wasn't as commercialised as it is today. But after a year, I had problems regarding ethics. The cages they were captured in were terrible and then came the Sars outbreak. So I looked at different African animals. I looked at rhinos, hippos, giraffes and I started hearing about how in times of drought elephants would come out of the forests and invade the coffee fields because they were irrigated. Of course, elephants aren't the politest; they tear out the entire tree or bush and as a result the angry farmers started killing the elephants. This human-elephant conflict made the headlines and it is then when I started to think 'Well, elephants eat coffee naturally and this should be pretty easy'. 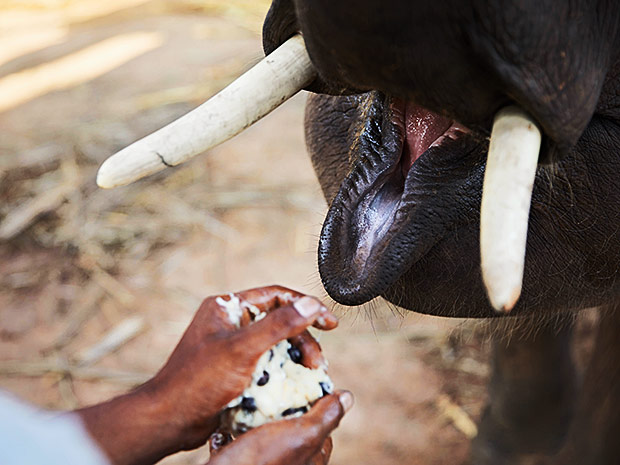 How is it 'coffee with a conscious' when the elephant is consuming something that is not part of its natural fodder?

When coffee grows it has a cherry and it's quite sweet when you eat it. Not as sweet as a regular cherry, but it's still fairly sweet. The elephants are attracted to the cherry because of the sweetness. However, I mix the coffee cherry with other food because I want to give the animals a more nutritional advantage. I want them to enjoy the taste, so I put in foods that are more expensive, that they normally don't get. Surin is a poor part of Thailand, so a lot of the elephant owners or the families looking after the elephants get free grass to feed the animals, but that's about it. Things like bananas, tamarind or rice bran are not given to the elephants. These are good for them and fatten them up.

I want the elephants to enjoy and benefit from the process, much like me. I also want to make sure that when I give them the cherries, they are not mouldy. From a safety perspective, I don't want to give the elephants mouldy coffee. The coffee cherry is a bit dehydrated, it's like eating dried fruits versus fresh fruits. 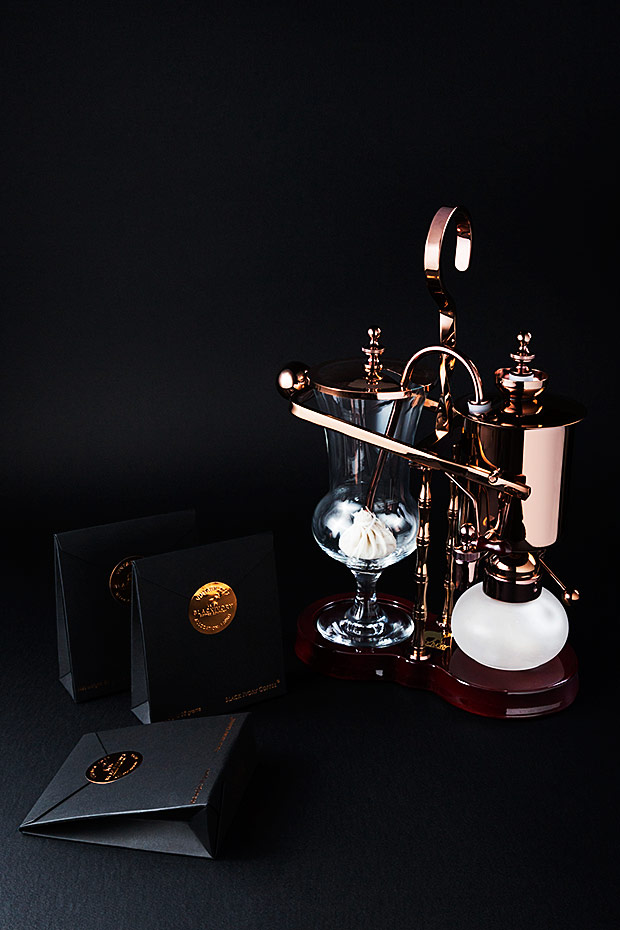 What makes your elephant coffee 'rare'?

I am the only person in the world making this coffee. Most people think it's an easy process; they think it's simple feeding the elephant coffee -- out it comes, wash it and you get a great taste of coffee. It took me 10 years to figure out the process because if you don't know what you're doing, the coffee will taste exactly like what one might think -- very elephanty or worse. Everything is important, from which beans to use, what food to give the animals, how to clean it, which herbs to match it with. All of those are parts of the process to get right. You can taste a distinctive difference with Black Ivory Coffee because there is a science behind it, as well.

Why is Black Ivory Coffee so expensive?

It's the rarest coffee in the world. I produce only 120kg of it, which makes my producing, marketing and packaging costs a lot higher because everything is in much smaller volume. Accounting costs all of these things when it's a 100kg versus 1,000kg is going to be much more expensive per unit. It takes 33kg of coffee from the coffee bush to make 1kg of Black Ivory Coffee. When the elephant decides to go swimming (I don't restrain the elephant if it wants to walk through grass or wants to go for a swim) and goes to the bathroom during that process, I lose the coffee. Also, a lot of elephants break the beans when they chew. Any broken beans can't be used. So, I have a lot more loss than a regular coffee producer. 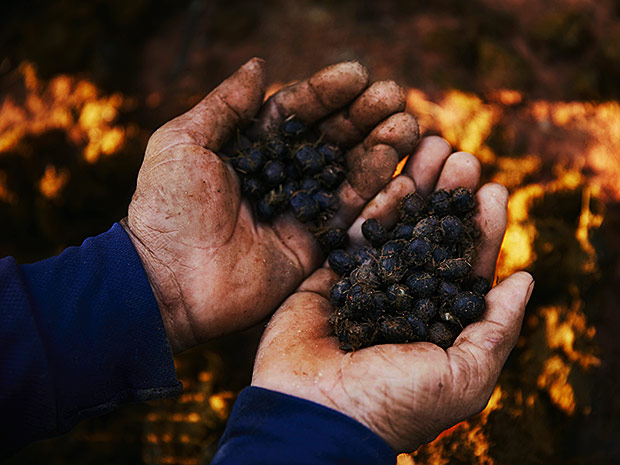 Why do you cater to high-end consumers?

Well, this is the most expensive coffee in the world but it's not expensive for an experience. The high cost of production makes it expensive. But I want to create an experience for people and by creating an experience, it means hitting all the senses. That's why the coffee is hand-ground in a syphon, sourced from Austria or France, usually dating back to the 1840s, and brewed at the table, in front of the consumers. I want people to experience it in a beautiful environment, which hotels provide.

Down the road, I would like top Michelin restaurants to offer it. I think this is where Black Ivory Coffee complements Michelin-starred restaurants -- where it heightens the experience and continues in the same trajectory as the presentations and the taste of the food and exemplary service offered.

In a café, everything is so rushed for the most part, it just makes more sense that this is not the type of environment where I want to be.

Why Thailand and why Thai Arabica?

In Africa, a majority of the elephants are wild, they are not captive like in Asia. Ethiopia has no elephants even though it is the birthplace of coffee. So that was a problem. Accessibility and safety were concerns. When I looked at Asia, I looked for a country that grew Arabica, because Arabica is superior to Robusta.

Despite doing the elephant dung coffee trials in Canada for two years, I started refining the process at a pygmy elephant camp in Sumatra, Indonesia. But I wanted to work where the elephants are treated ethically, where there are enough elephants I could use for production and in a country with good coffee. So, when I looked at places like Sri Lanka, the quality of coffee wasn't great. This was the same with Myanmar and Laos, as well.

All these factors made me choose Thailand. I first went to The Golden Triangle Asian Elephant Foundation, which is a government-rated charity. It's a beautiful environment and they care for elephants onsite. I know when I give money to them, it's not going to go into somebody else's pocket and that's on a local level. On a national level, I wanted to make sure I didn't have to deal with red tape and corruption.

Coming to Thailand for what I do has been great. Though after four or five years in Chiang Rai, I needed more elephants, so I moved the process from Chiang Rai to Surin.

Thailand grows 100% Arabica, but I spent a lot of time sourcing the right coffee beans because that makes a difference -- origin, altitude, processing techniques and even the sorting, size of the beans, the roasting, the brew, the grinding, all of the water that you use -- all of those characteristics and inputs will impact the quality of the coffee. The quality of coffee in Thailand has been increasing with the ever-growing demand and interest in coffee.

How do you ensure that the elephants are not exploited by their handlers for B350 per kilogramme of coffee?

Unlike civet's, elephants weigh 1,500-2,000kg. If they don't want to eat, they spit the food out, in your face, or they just don't allow you to put it in their mouths. So, force-feeding is not an issue. Ethics, in general, is a difficult question because there's science and then there's emotion. The emotional side is, lots of people now no longer care about riding elephants, and the bull hooks are controversial. I just want elephants to be elephants and do what they are good at -- eating. They eat 10% of their body weight each day.

In Surin, there are rice fields. I work with the Kuy people, who have been looking after elephants for 3,000 years. Is it a perfect situation? Absolutely not. Elephants eat for 18 hours a day, they sleep for three or four hours. It's hard to see what's going on all the time. My policy is that I don't work with elephants who are babies, sick or have a history of illness, I work with strong elephants. For a lot of the elephant owners, an elephant is their biggest asset. We are talking about 1 or 2 million baht per elephant. So, from their perspective, they don't want their elephants to get sick.

My philosophy is that I am giving them 1% of their diet. It's not every day, it's not all year round. Every day I pack 'lunch' for the elephants -- each day I give the elephant families a set quantity of coffee mixed with a set quantity of their favourite foods. I control the food-intake. I know every elephant, I know how much I feed them and how much I get out and I track it daily.

If an elephant produces X amount and then suddenly produces a multiple of 10 X, I would see it right away. The reality is that the carers are not coffee experts and there's no coffee available in that region, so they're not going out and buying coffee cherries to force-feed the animals. I'm the only source.

You launched Black Ivory Coffee Stout with Mikeller. Why did you choose Denmark?

I did it with them because they are arguably the world's best craft beer producer. I think the match makes a lot of sense because they are as artisanal as I am. I'm also friends with the Mikeller people in Bangkok. I knew them, I knew the passion and quality that goes into their product. I'm passionate about what I do, they're passionate about beer. I trust them wholeheartedly about the quality and the knowledge in making their product. I knew my coffee was going into good hands and it would be special. Also, people who drink Mikeller beer are passionate and knowledgeable about beer. Those are exactly the type of people whom I think will enjoy Black Ivory Coffee.

Where does Black Ivory Coffee plan to go from here?

Next month, I'm launching the coffee at the Ritz Carlton in Toronto to coincide with the Toronto International Film Festival. This will be followed by London and Switzerland. London has world class five-star hotels and Michelin-starred restaurants, and the coffee connoisseurs are more. Switzerland is a different market and I want to experiment with different places. The vibe is very different, but in terms of hospitality, a lot of the hotels, the hotel schools -- all the top ones in the world are in Switzerland. You have great hotels and service and you also have the population that are affluent and curious enough to try my coffee. Then you also get the tourists.

I am also working on barrel-ageing the coffee in rum and cognac barrels. I'll be launching that over the next two months.

Where is Black Ivory Coffee available in Bangkok?

Black Ivory Coffee is served at Erawan Tea Room at the Grand Hyatt Erawan, Anantara Siam and The Siam. The Intercontinental started serving it at the end of July. I would say the price range is from B1,500-1,100++ for 35g, which serves two to four people.