Hailing from the Swiss Alps, world-acclaimed Andreas Caminada, chef-owner of three Michelin-starred Schloss Schauenstein restaurant in Fürstenau and one Michelin-starred Igniv in St Moritz, will showcase his culinary finesse to epicures in Bangkok from Oct 30 until Nov 2.

The four-evening affair is hosted by the St. Regis Bangkok. It will feature exclusive dinners by the highly-praised Caminada and his German head chef, Marcel Skibba, who currently directs the kitchen of the three-year-old Igniv.

In 2003, he, as a tenant, renovated the Schloss Schauenstein's 12th-century castle and has been running it as a hotel/restaurant since. Under his ingenious culinary direction, the fine-dining 30-seater was granted three stars in 2010, and a year later achieved 23rd place in the World's 50 Best Restaurants.

Caminada opened his latest establishment, Remisa -- La Tavlada, a weekend café of the Schauenstein castle, in March 2012. All three restaurants of his offer a unique dining experience based on fresh ingredients; clean, simple flavours; and vibrant colours to inspire and intrigue the senses.

As a perfectionist, the Swiss chef also focuses on palate pleasure. Though using familiar, simple ingredients, he turns them into extraordinary culinary creations to ensure the dishes are never lacking excitement and always surprising. Each component complements the others, and together they create a delicious balance of flavours and aromas.

Caminada's assistant and head chef, Marcel Skibba, joined the team in Switzerland back in 2015. Skibba soon took the sous chef position at the three-starred Schloss Schauenstein, and, when Igniv opened at Badrutt's Palace, he was Caminada's first choice for the kitchen lead. It proved to be an excellent choice, as the Michelin Guide awarded Igniv its first star in 2017, just nine months after opening, while Gault & Millau gave it a 16-point rating (out of 20).

"Our aim with Igniv is to create a sophisticated social experience. We want to bring people together around the table, to get them eating together, speaking to each other, sharing ideas, memories and moments, while sharing and enjoying our food," said the Swiss chef Caminada.

Thus, Igniv is where haute cuisine meets the delight of sharing. Refined dishes are served in a very non-traditional way to provide one-of-a-kind communal fine dining.

At St. Regis Bangkok's Jojo restaurant, guests will be able to sample up to 16 plates by chef Caminada and chef Skibba.

Representing the main courses are fish soup; beef with morning glory and onion; chicken with aubergine, lemon and garlic; and pork belly with celery, pineapple and truffle.

While Egg Surprise with caramel; Swiss chocolate-coffee; and passionfruit-rice-shiso are some of the desserts to give the evening a sweet finale.

For more information and reservations, call 02-207-7777 or email fb.bangkok@stregis.com or visit stregisbangkok.com. 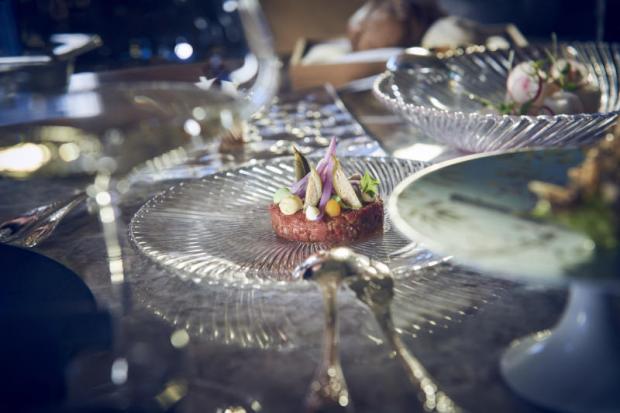