Welcome to the Dark Side
Life
Social & Lifestyle

Welcome to the Dark Side

Omega pays homage to Apollo 8 with its latest timepiece

On Dec 21, 1968, Command Module Pilot Jim Lovell on board Apollo 8 said to ground control, "We'll see you on the other side", before the spacecraft orbited the Moon and disappeared beyond the range of radio contact. 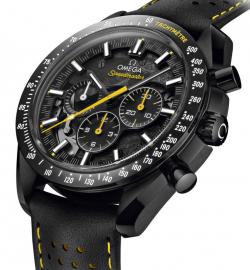 Omega Speedmaster Dark Side Of The Moon Apollo 8 chronograph.

The astronaut's words are engraved on the caseback of the Omega Speedmaster Dark Side Of The Moon Apollo 8 chronograph, which commemorates 50 years of the first lunar orbit by Lovell, Frank Borman and Bill Anders, which historically occurred on Christmas Eve.

The mission was also famous for the "Earthrise" image, which gave a new perspective of our planet. Orbiting the Moon 10 times, the crew viewed its dark and mysterious side that inspires Omega's timepiece.

Unlike previous Dark Side watches, this model is powered by a specially-decorated and blackened version of Omega's Moonwatch movement, whose bridges and main plate have been laser-ablated to produce realistic imagery of the lunar surface.

The Calibre 1869 is revealed by the skeletonisation of the timepiece, which like the Moon, has two sides.

While the back of the watch delves into the dark side observed by the astronauts, the dial-side in a light shade depicts a landscape of craters that represents our view of the Moon's surface from Earth.

The dark look is enhanced by producing the entire watch in black zirconium oxide ceramic, contrasted by white markers and tachymeter scale as well as yellow chronograph hands and accents.

The yellow colour coding recalls those on a Speedmaster racing model introduced in the same year as the Apollo 8 mission.

The colour scheme extends to the black leather strap with micro perforations to reveal the yellow rubber inside.

Priced at 338,000 baht, Speedmaster Dark Side Of The Moon Apollo 8 is available at Omega boutiques in Central Embassy, Siam Paragon and The Emporium. 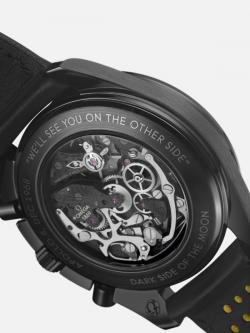 'We'll see you on the other side' engraved on the caseback.