Phra Rachawang Doem, or Thon Buri Palace of King Taksin the Great, will offer free admission from Saturday until Dec 28 to commemorate the 250th anniversary of the establishment of Krung Thonburi Sri Mahasamut as the capital of Siam in 1768.

The formal palace of the King is located on the west bank of the Chao Phraya River near Wichai Prasit Fort. It was the strategic location for looking out over the surroundings, including possible waterborne attacks. Thon Buri was an old town established during the Ayutthaya period. King Narai the Great (1656 to 1688) made it a fort town, with one fort on the west and the other on the east bank of the Chao Phraya River. After the fall of Ayutthaya in 1767, King Taksin chose Thon Buri as his new capital because of its good location for farming, trading and military affairs. 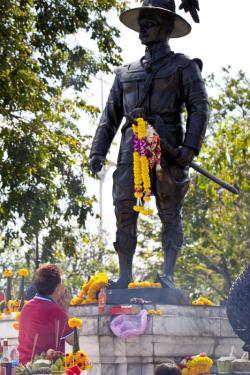 When the Thon Buri era ended in 1782, the new royal palace was built on the east bank of the river by King Rama I of the present Chakri Dynasty. The old palace of King Taksin became a residence for members of the royal family of the king. Some kings were born in Thon Buri Palace, including King Rama III, King Rama IV and King Pinklao, who was the second son of King Rama IV.

When King Rama V established the Kingdom's Royal Thai Navy, the palace was used as the Naval Academy, and later became the headquarters of the Royal Thai Navy. It was King Rama V who ordered that the old palace not be demolished or damaged. The palace underwent a 160 million baht renovation from 1995-2002. The royal residence was turned into a museum.

In 2004, the United Nations Educational, Scientific and Cultural Organisation (Unesco) recognised the conservation and restoration of the country's valuable historical structure. It named Thon Buri Palace the winner of Unesco's Cultural Heritage Conservation Award for the Asia Pacific region.

The important historical areas inside the palace include King Taksin's throne hall, which is today used by the Royal Thai Navy to welcome VIP guests and for hosting important events and ceremonies.

Since the Thon Buri Palace is located on the compound of the Royal Thai Navy headquarters, public visits are limited. It normally allows only group visitors, who must submit a letter requesting permission to visit at least one week in advance. Entrance fees are 100 baht for adults and 60 baht for children.

The two-week free admission from Saturday until Dec 28 will be a good chance for individuals to visit. The visiting hours are 9am-3.30pm.