There's true passion in every word when Syed Saddiq Syed Abdul Rahman talks about his belief in the power of youth. As the youngest cabinet minister in Asia at just 26 years of age, he is living proof.

The young Malaysian serves as the Youth and Sports Minister in the government of Prime Minister Mahathir Mohamad administration, who led the Pakatan Harapan (PH) alliance to an upset victory in May over the corruption-plagued Barisan Nasional coalition that had ruled the country for six decades.

Minister of Youth and Sports, Malaysia

Dr Mahathir leads the Malaysian United Indigenous Party, or Bersatu, the party that Mr Saddiq joined prior to the election. The two have worked closely together, and the cabinet opportunity came as a welcome development. As it turns out, Mr Saddiq needed a job.

"When the 1MDB scandal came to be, I knew what was happening was wrong so I decided to speak up and as soon as I did, I lost my job," he tells Asia Focus.

Mr Saddiq was a part-time lecturer at a local university, a researcher at a local think-tank and a part-time special officer under the Minister of Law, so he had quite an insight into what is now the world's biggest money laundering scandal.

Knowing the scale of the corruption at 1Malaysia Development Bad was enough to keep him up at night, he says. His mother, who was a civil servant, was threatened but it didn't stop him from speaking out about the ethical shortcomings of the Najib Razak government.

"It was a fusion of anger and passion," he says. "On the other hand, you really want to change what is happening to Malaysia where one person speaking up can lead to their family being systematically threatened."

The impulse to speak out cost him all three of the jobs he held, including the one in the Najib government. But the passion to do right propelled him further, and his involvement in politics "skyrocketed".

"Initially, I was never that interested in politics and I just wanted to speak my mind," he recalls. "I always wanted to be a public policy enthusiast and I love doing research work, but I didn't want to be at the front end of politics.

"But when I lost my job, I knew that there is a systematic problem In Malaysia."

The systematic problem with Malaysia's institutions, which he believes has blocked young people from speaking their minds, is what he wants to amend. This drive led him to co-found Bersatu, originally as one of Dr Mahathir's research officers. Now that he is in a position to make policy, he admits it is a daunting proposition.

"It is exciting but at the same time, the responsibility and duty which comes with it is humongous," Mr Saddiq says of becoming a minister at such a young age. "But when the heart is in the right place and you know that the post comes with a great sense of responsibility to the nation and especially to the young people of Malaysia, I don't just see it as a job, I see it as a duty."

"Change will never come if everyone cowers away," he says, but only when "a generation decides to go against all odds and challenge the structures."

One of the challenges he has set for himself is to install youth leadership in every level of the Malaysian government and democratic institutions, through unconventional solutions where needed. 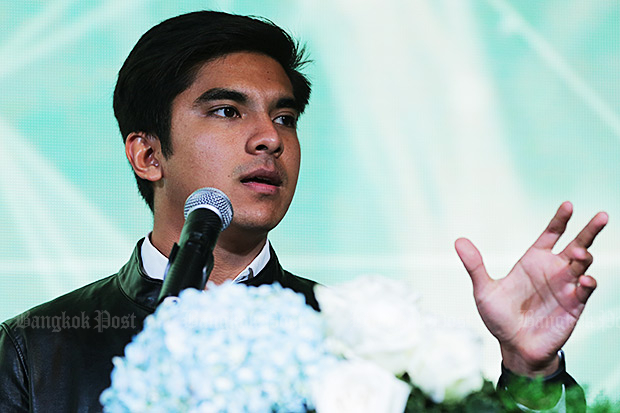 "If we keep on using the same ways of addressing problems, then we are bound to be outcompeted by other countries," he says. "I want to ensure that at every single layer of decision making in Malaysia, there will be a youth representative."

Mr Saddiq wants young people in his country to get involved in providing ideas and being around the table or on the boards where decisions are made. Currently, the PH-led government is "youthifying" its leadership structure, not only at the cabinet level -- two ministers and three deputies are aged below 35 -- but at the grassroots level as well.

For example, the minimum age required to become a village chief in Malaysian communities with a population of 1,000 to 2,000 has now been reduced from 40 to 21.

"Before there were only a handful of local councillors who were below 35 but now there are a lot of them and this shows that we are youthifying the process," Mr Saddiq says with pride in one of his earliest achievements as a minister.

But, "it must not stop there", he adds, saying that in addition to political empowerment, young people need to be better represented in the corporate world. He wants to ensure that every board in the private sector has a minimum of one representative aged below 35.

"Some might see this as a radical solution but it must be done," he stresses. "This is because corporate boards today do not operate the same way that they did before, when it was about experience and stability. Now it is about innovation, disruption, adding value and diversity."

Society is undergoing revolutionary changes, largely because of technology, and this change requires input from the young, says Mr Saddiq. Being part of the decision-making process from an early age will also help them and the country prepare for the future.

Asia, he believes, is "20 years behind" in terms of getting young people on corporate boards when compared with the US and Europe. The average age of board members, chief executive officers and chief financial officers in the region is also "way older" than the global average.

Mr Saddiq has encountered challenges from critics who believe there is not enough young talent in Malaysia, but he has challenged them to look at the Forbes magazine Under 30 Asia list, which includes 13 Malaysians.

"These are people who shook industries and led their own companies to success and they are the future, but they are not being given the opportunity on corporate boards," he says. "It is not about stripping opportunity from those who are above 50 as if there are 10 spots, please just give one."

Looking forward, the minister wants to ensure that in the next five to 10 years, no one will ever again say to Malaysian youth that just because they are young, they are immature and incapable. This can be done by making it normal for society to understand that young people are not only leaders for tomorrow, but they can also lead today.

"To me, this is the future because [vocational school students] are the ones that are preparing for the future," he says. "[Vocational school] is cheaper. The time spent on getting a diploma is shorter while the job guarantee is much larger."

The keys are to address the rate of retention, promotion and entry-level pay, which he believes should be better than the current rate of US$500-600 per month. He believes the minimum starting wage for a qualified vocational school graduate should be increased to $700 or even $1,000 because they do an "exceptional job" for a lot of foreign companies that are taking them in.

"This is to show that they deserve the pay as they are amazingly skilled workers."

As an advocate of e-sports, Mr Saddiq wants to break the "misconception" that gaming is only for lazy young people who sit in front of computers all day but cannot make money out of it because "there is a lot more to it than that".

He notes that at the 2019 SEA Games in the Philippines, e-sports will be a medal sport, sanctioned by the International Olympic Committee, for the first time ever. After a demonstration event at the Asian Games in Indonesia this year, the competition will be expanded to six e-sports titles next year with Mobile Legends being the first game identified for inclusion.

E-sports is also very big in China where an "e-sport town" complex was opened in Hangzhou in November at the cost of $280 million. The LGD (League of Legends) Hangzhou arena is the fourth facility of its kind that the Chinese sports and entertainment company, Allied Esports, has opened in China, with others located in Tianjin, Shenzhen, and Beijing.

With a budget of $2.22 billion, the Hangzhou city government has also announced plans to build 14 more e-sports facilities which will include an e-sports academy, e-sports-themed hotel, theme park, a business centre, and a hospital designed for e-sports players, before 2022.

In Asean, the Malaysian government has pledged to put $2.4 million into e-sports in 2019, while the Sports Authority of Thailand last December officially recognised e-sports as a sport.

"It's not just about the sport element," says Mr Saddiq. "I care more about e-sports being a precursor for young people to become more IT-literate, to become passionate members in the ever growing IT software coding world -- and it is also a big investment opportunity."

Mr Saddiq says that since his ministry announced a commitment of $2.4 million from its budget, at least three industry players have already pledged to invest in initiatives at the same amount and "it keeps on increasing".

"There is big news coming at the end of the year, which I am not in a position to disclose at the moment, but big investors are coming in to invest in the e-sports scene in Malaysia," he adds.

"This will create high-quality jobs for young people and will drive creative passion in IT software coding which is the future. It essentially will help future-proof Malaysian youth and that's what I want to do."

The aim, he says, is for Malaysia to become the e-sports hub in Asean through collaboration with partners, and pat of the broader Asean agenda going forward.

As a part-time lecturer three years ago, Mr Saddiq taught debating. Public speaking is part of his repertoire but he actually enjoys the public policy side of his job more.

"I very much enjoy doing public policy and when I was a researcher at one of the state governments, it was a lot more about public policy research, which I have a great passion for, and it was also very easy to travel to Bangkok every month," he says.

In the future, the 25-year-old minister still wants to further his own education. He was offered a place at the Blavatnik School of Government at Oxford University but had to turn it down because of his new political career.

"I was offered a scholarship to complete my master's in public policy at Oxford University but that was when I was at a critical juncture as I was already in politics, so if I had left Malaysia, I wouldn't have been able to contest the election."

The young and energetic minister did not regret the decision but he is "definitely" looking forward to going back to study one day. Right now, he says, "the heart is where it is" as he foresees more exciting things to come, and he wants to be a part of the team that "rebuilt Malaysia".

"Debating has opened up my eyes to a lot of issues and one thing that it taught me is to always speak my mind no matter how difficult it is," he says. "It is also about moving actual debates on important issues out of the debate rooms to the actual world, and one part of that is to have the moral courage to do so."