Wrapped in saffron robes with his head and eyebrows shaved to the skin, no one could ever expect Ekkachai Arinthamo to be a digital creative with a significant number of online followers.

His website, "Dhamma On Lens", has in the past few months sparked the intrigue of those both religious and non-religious -- all thanks to his impressive photography and design works that would make anyone go: "Wait, a monk did that?" 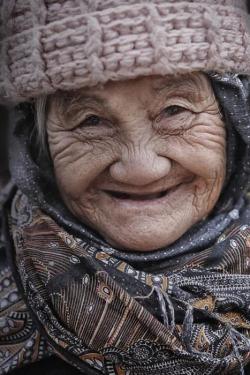 "A smile is a symbol of happiness and health. While wrinkles are symbols that add value to your history." Photos courtesy of Dhamma on Lens

On the website are charming portraits of novice monks doing their daily duties, toothy shots of happy elders living simple lives, and serene landscapes of Thailand's lush farmlands and hills. It doesn't stop there. The website also has galleries of graphic design works, consisting of beautifully designed temple fair posters and architectural 3D renderings of modern Buddhist pavilions built in both Thailand and abroad. Most, if not all, are Ekkachai's work.

Buddhism doesn't have to be boring. Neither is it reserved only for the old. Ekkachai, 32, is one of the many younger generation monks looking to gently rock the boat on how Buddhism is perceived and taught among the new generation of Thais. By taking well-composed photographs, designing aesthetically pleasing print media and modernising temple buildings, he hopes to not only update the image of Thai Buddhism into something more simple and accessible, but to teach Buddhist principles through them as well. With this in mind, he has been running workshops in his spare time to teach younger monks the techniques of preaching without talking or writing.

"Preaching or giving sermons isn't just limited to talking," said Ekkachai while sitting inside Wat Nak Prok, the temple he's been living in since he was 18 years old. "There are many ways.

"If you look at [the works] from an art perspective, you see simplicity, peacefulness and modernness. With just that, people understand the principles of Buddhism without us having to preach. I don't want people just saying that the designs are beautiful. I want people to look past the beauty and be at peace."

The start of Ekkachai's passion for art first came from necessity. Having been ordained at his home province of Maha Sarakham when he was 12, he was asked to hand-paint posters and temple signs when he was 15 years old as one of his temple duties. Moving to Wat Nak Prok temple in Bangkok three years later, the venerable father, seeing his talent, tasked him with creating media to attract people to visit the temple.

"Once I started doing this, I really wanted to find a [background] image that could really connect with the masses. There wasn't any," he said. "There were only official photographs or photographs of the ceremony itself, and to a person who doesn't really go to the temple, they wouldn't like those kinds of photos. They might prefer looking at celebrities and going to the mall instead." 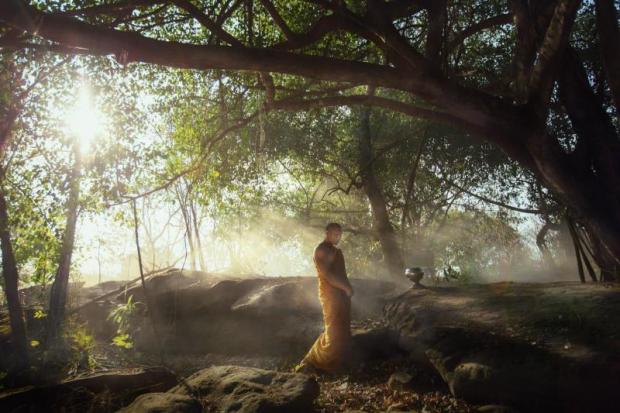 Left Happiness Is A Natural State Of Those Who Seek The Path, at a forest temple in Khemarat, Ubon Ratchathani. Dhamma on Lens

Seeing through the eyes of the average person, Ekkachai researched what advertisers were doing. He observed the ads and billboards in the city and adapted their techniques to be used to propagate goodness instead. He studied design and photography on YouTube, eventually joining training courses to refine his skills even further.

"They say a picture is worth a thousand words," he said. "But I have my own stories that I would like to reflect to people and cause them to think, have faith, and to be more aware of the way they live their lives." 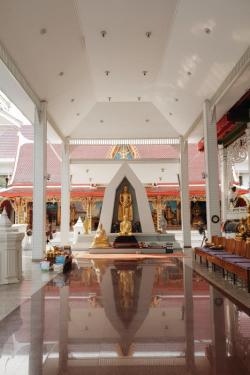 Above Nak Prok Temple with Ekkachai Arinthamo's mix of traditional and contemporary design.

Now, instead of the traditional cluttered and campy temple fair posters, Wat Nak Prok's posters are simple and modern, with barely any use of Thai patterns, motifs and outdated photographs.

"The representation of Buddhism is usually in the form of nature," said Ekkachai. "Leaves, grass, rocks, rivers, we use these truths in order to design things. We don't use complicated patterns as part of our works. That's my thought process in creating media. If you look at something and it brings you peace and trust to the temple, you will be at peace."

After photography and design, Ekkachai started gaining interest in architecture -- the reason being that his minimalist posters clashed with the complex and worn down designs of the temple buildings.

Inside Wat Nak Prok visitors can see clearly the influences that Ekkachai had on its architecture and interior design. The shrines and offices are modern, geometric and simple, with white concrete and wood as the main materials. It was done in order to make visitors feel as comfortable and at peace as possible.

"People come into the temples and they feel uncomfortable," he explained. "They feel like 'I'm a sinner. I'm not ready to go into a temple'. It pushes people out. People don't want to go into temples because they're too elevated, and when they enter the grounds they have to act a certain way and this is just very cumbersome."

Hoping to solve these issues, Ekkachai designed the pavilions and shrines to be simple and easy on the eyes to reduce the untouchable, sacred feeling -- making Buddhism and its principles as tangible as possible.

"This whole process, I see it as design," he said. "How can we reduce all of the complex and complicated steps for people to reach [Buddhist philosophy] easily? When you come into the temple, there are places to sit, places to walk, places to kowtow peacefully without cat or dog fur on the floor. If the physical aspects of the temple are designed in a way that makes you feel clean, you don't need to even meditate, you already feel at peace. Design has an influence on how people choose to visit something. Some places I enter and I feel very saddened because it wasn't taken care of in a way that connects with the people of today."

Above Nak Prok Temple with Ekkachai Arinthamo's mix of traditional and contemporary design.

Though noble in cause, Ekkachai's projects have not been met completely with open arms. There have been critics of his methods, especially among traditionalists.

"I have to say that doing this is really walking on the edge," he said. "We don't know when we're going to fall off or be pushed off, so we have to be careful. We have to be careful of people wanting to find faults and to reprehend us."

Only working among communities who can accept tech-savvy monks, he additionally has to deal with senior monks, who are generally more concerned about preservation of tradition. Being a zealous young monk, sometimes there are conflicts and disagreements which he himself has to work through to find the right balance. 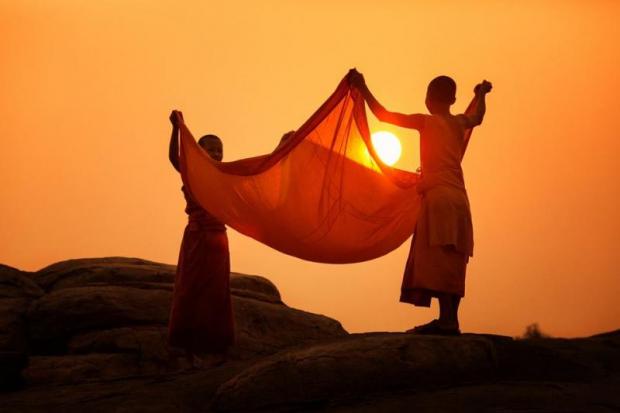 "I learned these skills in order to be mediums of teaching dhamma and religious teachings," he continued. Dhamma is in the centre. There are many ways of seeking it. Some seek it through listening to sermons, some through prayer, some through ceremonies. I've opened a new path, which is through the art of photography. What we do, if you compare it to the temple -- we're the gates of the temple. If the gate is constructed well and beautifully, there's more chance for people to come in to find their religion and faith.

"I just want people to be able to learn and study what they're good at to their fullest potential. If they study to their fullest potential, they can come back and develop and improve their community and propagate goodness. If we want to study something that we love and someone tells us that it's wrong, we'll be struggling to adjust ourselves doing something we don't like. Isn't it better to focus on something you like, and use that focus for the benefit of the community?"