More LGBTI personalities in politics and the mainstream media, plus the return of a transgender beauty pageant in our monthly round-up of rainbow news.

We rarely see LGBTI characters and storylines on free TV, especially on the old channels that have been around for decades. And any time we actually do, they tend to be portrayed as the supporting comic relief or the object of a tragic love story. Conservatively. Stereotypically. The shows never seem to explore the characters below their surface.

Imagine our surprise, then, when we came upon a trailer released just before Valentine's Day for the Channel 3 lakorn, Wai Saeb Saraek Khad 2 (Broken Season 2). In 2016, the show's first season told the story of a child psychologist dealing with a group of school students from broken homes who develop antisocial behaviour. It was well received by the public. Now in 2019, Broken is back, tackling more controversial but relevant subjects. 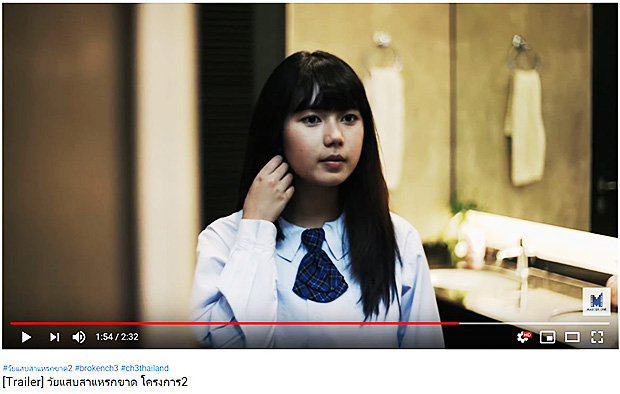 A scene from Broken Season 2 where the character cuts her hair.

Nestled between scenes of a teenage girl being pressured by her family to study hard, an autistic boy getting bullied, a kid throwing a tantrum and a boy attacking his father for pulling the plug on his computer game, is a girl on the road to gender self-discovery. In one scene, she is putting on a chest binder. In the next, her mother is screaming at her, trying to take her shirt off to reveal the binder underneath. In other scenes, she cuts her hair, wonders whether to be footballer or a cheerleader and even leans in for a kiss with a male friend.

It's quite refreshing when a lakorn steers clear of soap opera clichés to deliver something with more substance and meaning, something beyond simple entertainment. We now wait to see how the gender issue will be brought to life on a platform that rarely discusses gender identity, especially in adolescent girls. Who knows what direction the storyline will take, but we sure hope this story of a teenage girl exploring her gender identity will be handled sensitively. It will undoubtedly generate plenty of conversation in our society when Broken Season 2 starts airing at the end of next month.

WHAT MAKES A MAN?

Many men get offended if they're called "gay". But not actor Teeradon "James" Supapunpinyo.

At a press conference for his latest TV series Great Men Academy, Teeradon spoke to Nine Entertain about fashion, explaining how he likes to mix and match women's clothes. The line that separates gender in terms of wardrobe doesn't exist for him.

But in wearing feminine clothes and make-up, Teeradon admits it makes people talk about his sexuality. While he insists he's straight, being referred to or thought of as gay is not a problem for him. 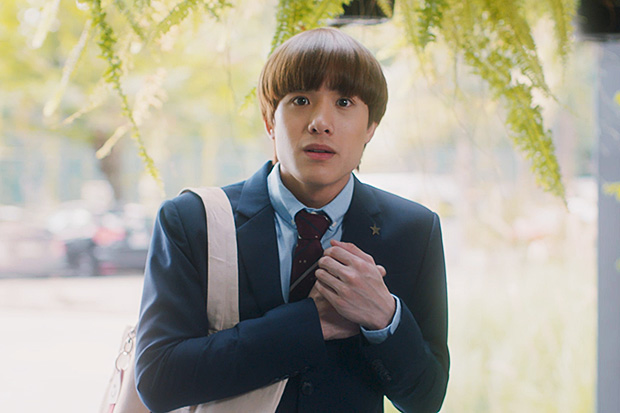 "It's 2019. I think a lot of things should be open. Gender and fashion should be more open, so I'm not too worried about it. And even if people say that I'm a 'third gender', I don't feel the term is an insult. There's nothing wrong with being a third gender," Teeradon said. Last week, he also appeared in a fashion set with Hamburger magazine, wearing all feminine clothes. The actor's new series is definitely one to watch. Great Men Academy, now available on Line TV, centres on a teenage girl named Love who has the ability to shapeshift into a boy. In the boy's body, played by Teeradon, Love joins an all-male school to be with her crush, resulting in several close encounters with her schoolmates. We can already sense the queerness seeping out from the relationships between Love and the other boys.

An election is coming. And for the first time in the history of Thai politics, we're seeing LGBTI people out campaigning, representing different parties as candidates. They are from different backgrounds and professions, from models, filmmakers and activists to drag queens and more.

Their appearances have generated interest among the public, though none can top that of Pauline Ngarmpring, who is one of the PM candidates for the Mahachon party. If elected, she will become the first transgender PM of the country. 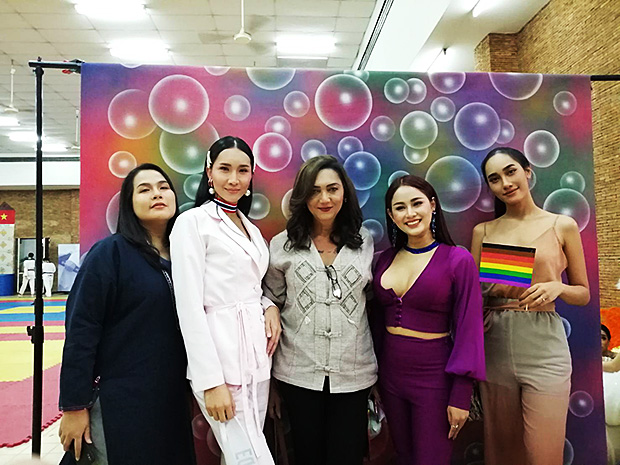 On the other side, while more LGBTI people are actively participating in politics, non-LGBTI candidates are also approaching this issue and the community in their campaigns. A recent TV debate saw representatives of different parties join in a discussion about LGBTI rights, to mixed results. Members of some parties also enthusiastically joined the pride festivities in Chiang Mai last week. Suffice to say, gender equality and rights are topics that several parties are interested in right now. Of course, only time will tell whether it's all to gain more votes or if they really care about the issue. For now, at least, we appreciate the effort. 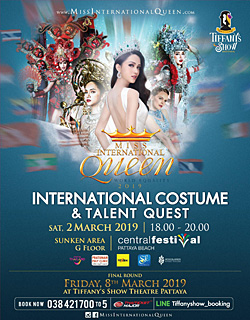 The transgender beauty pageant Miss International Queen has returned. Head over to Pattaya for an extravaganza that sees trans beauties from all over the world competing for this coveted title. Fans of the competition should visit CentralFestival Pattaya Beach this Saturday from 6pm onward to see the national costume presentation and talent contest. This portion of the competition is open to the public for free.

Come March 8, Tiffany's Show Theatre once again serves as the venue for the final round of MIQ, starting from 9pm. Wait and see who will be crowned by 2018 title-holder Nguyen Huong Giang from Vietnam. Don't forget to cheer for Kanwara Kaewjin, or Esmon, the Thai representative and current Miss Tiffany's Universe as she competes against contestants from all over the world.

Get your tickets for the final round at thaiticketmajor.com. Tickets cost 3,800 and 2,800 baht. Alternatively, catch the show's broadcast from 10pm on the same day on GMM25. For more information, visit http://facebook.com/MissInternationalQueen.