The first bite sets the tone for the meal to come, so it's worth making it a memorable one. Chef Darren Teoh knows this better than most. His restaurant, Dewakan, is the first in Malaysia of its kind; it uses only local ingredients, many of which are rare and unusual. Speaking of firsts, Dewakan has become the first Malaysian restaurant to enter Asia's 50 Best restaurant list, at No. 46.

Dewakan is derived from the Malay words "dewa" meaning "God" and "makan" meaning "food" or "to eat"; it can loosely be translated as "food from God".

"It's exciting to be recognised," says chef Teoh of Dewakan's debut. "It is nice to know that someone is paying attention to what we do. Dewakan is not just a restaurant, it is not just about feeding people, it's become an opinion leader in Malaysia; not that there are many people listening but now there's an opinion on it. It is nice that someone has thought that this small restaurant has something to say." 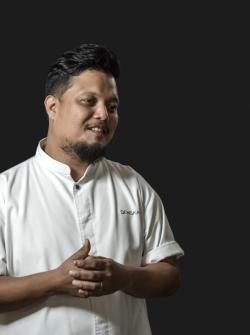 Known for his use of rare and forgotten ingredients, chef Teoh began his culinary career with the Les Amis group in Singapore. "It was exciting working with produce that was being imported. I was excited to cook things that one only sees in cookbooks. When the chef started having trouble with imported ingredients, he switched to local fish. That was when the real excitement began.

"The first time I butchered a fish, I cut a slice to taste. It was like, 'Woah! This is something different'. It was by no means super tasty, if I think about it now, but the minerality from the flesh was something else. I realised that my curiosity for things that grow in the wild was first sparked when my mum used to take us on nature walks and encouraged us to taste things along the way. The ability to access food that's not from a supermarket was what a lot of my childhood was about, climbing rambutan and mango trees in my grandmother's backyard and harvesting them. So, it has been a natural progression."

Dewakan's menu has been put together over the course of four years, since it first opened at KDU University College, in Selangor. It is the result of what chef Teoh and his team decided what Dewakan was going to be from the outset: focused on local ingredients.

"Just like every scrambler, I hear of something somewhere, get in the car and drive to it," chef Teoh explained. "Some of it is about timing, because everything is seasonal. So it's about knowing when to go and when to make the deal, which can sometimes take a year. That year of waiting does not guarantee that you will know what to do with it or if it's going to taste good. The mushroom used in our tarts, we had to rethink and engineer how to cook it. There is no end to sourcing. It's an ongoing process."

To eat at Dewakan is to taste food like nowhere else in Malaysia. Rare, unheard of ingredients from all over the country -- sea, mountain, jungle and farm -- are transformed into fine dining dishes.

"There is my culinary philosophy and then there is the restaurant's," he said. "I don't think Dewakan defines me and I don't think I define it. We started with a definition and we have evolved in the four years we've been open. It would be unfair and arrogant to say that it is my culinary philosophy. Dewakan is all the people who cook and who serve, all the purveyors and suppliers of the restaurant. If it were not for them, Dewakan wouldn't arrive at the level of cooking it has today. My personal philosophy is to cook good food, but that's not really a philosophy. Dewakan has certain paradigms that it cooks within and those paradigms are to cook things that are indigenous and naturalised, and to have a non-linear way of looking at food." 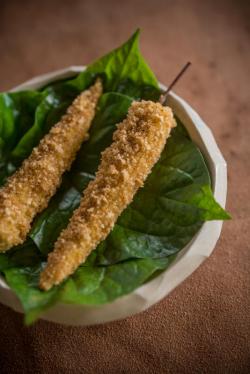 The glaze for Dewakan's duck dish uses a by-product of fish sauce. This is an example of what the restaurant does best -- take traditional methodology and apply it to new ingredients.

"Some things we do the old fashion way," chef Teoh went on. "A lot of it is not because we want it on the menu, it's because we want to figure out how to do it. We try to push for things that are rudimentary and fundamental, even primal, because a lot of our culinary heritage is only from the last 60 years or so."

He once stated that "Malaysia has no cuisine, it is an amalgamation of a lot of things". This belief stemmed from the fact that a lot of the curry in Thailand and Malaysia came with Indian traders, plantation workers and migrants.

"There were so many levels of influence in that period of time throughout Southeast Asia," chef Teoh explained. "We try to decipher what is contemporary and what is not. We don't have an answer, but it is something that we are trying to frame for ourselves."

While it may be difficult to define Malaysian cuisine, since it is has borrowed so much over the centuries, it has, perhaps, become more distinctive in the last 100 years.

"Because everyone who came to Malaysia during that time brought their own food," he said, "it started integrating and became its own food culture -- including for the people who were already here." To make things simple, Dewakan describes its cuisine as modern Malaysian.

"I think there is constant state of arrival and departure," said chef Teoh of his menu. "You are always arriving at something new and departing from something else. It's dynamic, very ingredient-driven, indigenous and naturalised with non-linear cooking. It is the easiest way to explain something that is so multilayered and complex in the kitchen and dining room." 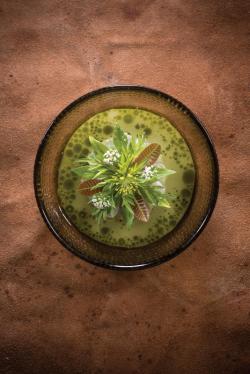 Chef Teoh showcased a progressive type of cooking he referred to as "modern" Malaysian cuisine in his 2010 book Redefinition: Molecular Cuisine: Traditional Recipes Through A Modern Kaleidoscope. However, he says that "molecular cooking" is a misnomer, as "everything cooks at a molecular level, even eggs. The terminology is a snapshot in time when restaurants were discovering this and putting this into play."

"What's interesting is that the molecular era gave us different textures," he went on. "Asian society has been using things like agar agar for aeons but how it affected our kitchen was to use these techniques without the equipment. The candlenut and mushroom foam that goes into our eggplant dish is made without any equipment because candlenut can be blended really fine and contains a huge amount of oil, which allows the making of a natural emulsion."

Apart from being executive chef and patron, a majority of chef Teoh's job is ideation. The concepts of the dishes come from him and then "magically appear over the next two or three days", as his team does the research and development.

"I think Dewakan is unique but I will not say no one is doing what we do," he said. "The only other restaurant in the region doing similar things is Locavore in Bali. In Malaysia, there are restaurants that use some of the ingredients we have made famous, but though there is no one pushing the same agenda, there is a trickle-down effect. It might not necessarily be the smartest thing to do because the market can be tricky. You need to take a big risk, which is what Dewakan is doing. This is not because it is the next trendiest thing, it is because it makes the most sense -- being responsible for what you cook."