Into the light
Life
Social & Lifestyle

Transgender drag queen Angele Anang lowered to the floor as she was pushed around and thrown away by a group of masked men. Her wig was removed. Nude, she crawled to her father, who was sitting nearby. He put a white flowing dress on her, crying as he did so. Angele, then bald and in white, went back to fight the masked men, over whom she proudly triumphed.

She then lip-synced the song Kwarm Chuea (Belief) by Bodyslam, which is about following one's dream no matter how many times we may fall.

That was the powerful performance planned and created by Angele herself. The three-minute act not only brought tears to the audience at the final round of Drag Race Thailand Season 2, both at home and in the studio, but won Angele the title, making her a drag superstar and the first transgender woman to have been crowned in the competition.

Angele said in an interview with Life that her performance in the show's finale was inspired by the story of her own life -- a dark period in her past when she was abusing drugs. She had early success in showbiz as an entertainer, then got into partying, and with it came drugs.

"It got into my head. It knocked me out," Angele, now 24, said about the grim experience. "Eventually, it got to the point where I wasn't able to work. It was very scary. My father was the one who picked me up and took me to rehab until I got back on my feet. It was a very important lesson for me. After rehab at the hospital, I briefly became a monk."

What's most striking about Angele is her rainbow-coloured wig, which she wore to the interview. It's the same eye-catching wig she put on the day she was crowned Drag Race's winner. But beneath the colourful wig, her head was shaved for her final performance, both for authenticity and for practicality when she had to dance around onstage.

Reflecting back to the road that brought her to where she is today, Angele said she had quite a fun childhood at school. "Academic stuff and math disappeared, but when it came to school events and performance, I was all for it," she recalled.

But fun time didn't last long. After her mother got sick from and later passed away from cancer, and after moving schools a few times, Angele felt unable to fit in.

Eventually, she left formal education altogether and began helping her father at his machine shop.By the age of 18, she was out following her dream when she became a showgirl at a cabaret in Bangkok. 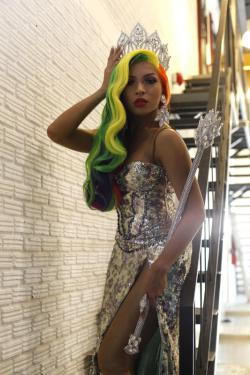 From dancer, Angele soon made her way to centre stage and made her name as a Beyoncé impersonator, a popular act among Japanese and farang audiences. However, it wasn't a big hit with the Chinese tourists who later became the main audiences at the theatre she worked.

"So I decided to leave after years of working for them. I wasn't their lead anymore. They only sold pretty faces, and they still do," she said. Angele soon found herself at Maggie Choo's, where she was able to put her creative mind to use and craft her own show. It also brought her connections with other drag queens. She eventually auditioned for Drag Race Thailand, and the rest was history.

On the show, Angele has been a strong contender from the start, winning the most challenges out of all the competing queens. In one challenge, she created a runway costume inspired by green curry. In another, she bared her body, donning light and wings in an angel-and-devil look. Her creativity and design, plus killer performance, were second to none.

Looking at this year's Top 3, Angele said they collectively represent the future of drag as an open and liberated art form. Two of the three -- herself and runner-up Kandy Zyanide -- are transgender women. The other runner-up, Kana Warrior, performed with eccentricity and grit, and is not the "pretty type".

"This is the future of drag," said Angele. "It's not just about men dressing up as women. It's not only about being pretty. Drag is an art that anyone can be a part of -- one that allows us to do and be anything, and we can make it whichever way we want it to be."

Drag Race Thailand has been very open in terms of the sexuality of its contestants. For Season 2, the floor was officially open for all to compete regardless of gender. When Angele came through as the winner, it not only made her the first transgender woman to win Drag Race Thailand, but also the first trans winner in the decade-long history of the Drag Race franchise originated by RuPaul.

Drag queens have been associated with the concept of female impersonators. So how does that affect a transgender drag queen? Angele said it came with both advantages and disadvantages.

"I've already had my top surgery. In a sense, that gave me some aesthetic advantages. At the same time, some disagree that what I do is drag," said Angele.

"I may have started out a showgirl, but now it's all linked and inspired by one another, and so I choose to do it my way. We have to acknowledge that the drag culture of Thailand, both in the past and present, is influenced and inspired partly by showgirls, by katoeys and women. I don't agree with segregation. We're all the same community. We do the same thing, just in a different format."

"My work in the drag business is really big to me right now," she continued, "because it's not just about entertaining people anymore, but also inspiring them. As the first transgender woman to win Drag Race, I want them to see how I've fought. It's an example for others, for younger people, that no matter how hard you fall, what matters is you get back up. I've been through a lot, and I may be inspired by what people say are ugly and scary [things]. But beauty and art can be born from it."

Angele also has a message for all transgender people in the world: "You're not alone."

"There are millions of trans who have had problems in their lives, some more so or less than others. It's best to be yourself. Don't change for anyone. Don't yield to what others try to pressure you to be. They don't know you. The world may not always be fair, but you can be fair with yourself. Be honest with yourself and keep on fighting," she encouraged.

Before joining Drag Race, our queen said she dreamt of appearing in films and lakorn and being successful in showbiz. But right now, she has her eyes on going on tour abroad, to perform at venues around the world, and even at the extravagant Drag Con in the United States, which is pretty much the pilgrimage site for drag queens.

"If I get to go, of course I'll do Beyoncé!" she laughed, "that and the martini-glass show. It's a very seductive performance. Very sexual, even. I think it would be empowering for a trans woman to perform it. There have been drag queens who did martini-glass shows, but I don't think many trans have done it yet."