Meet Plai Ekachai, the first white elephant to be certified under the reign of His Majesty King Maha Vajiralongkorn Phra Vajiraklaochaoyuhua

A decade ago when a male elephant was brought from the southern province of Krabi to live in an elephant conservation centre in Maha Sarakham in the northeast, only Khruba Thammunee Thitadhammo, a monk who founded the centre, believed that it was a white elephant.

"People laughed at the idea. No one believed what they heard from the monk, even the previous owner," said Thanabadee Promsook, 35, the centre's manager.

In October last year, a team of experts visited the centre. They carefully examined the elephant and later certified it as a white elephant. Today the 33-year-old Plai Ekachai (plai means a male elephant in Thai) is known as the first white elephant discovered under the reign of King Rama X.

Plai Ekachai has all the features. He also has an elegant look with a perfect curved back like a bow and a pair of 100cm long tusks. His weight is almost 5 tonnes.

Although he is in a good shape and strong, the previous owner in Krabi wanted to sell him because the elephant refused to let tourists ride on him or haul heavy logs, said Thanabadee. Khruba Thammunee paid 1.5 million baht for the elephant.

"When Plai Ekachai arrived at the centre, all elephants trumpeted as a salute to their new leader," he said. 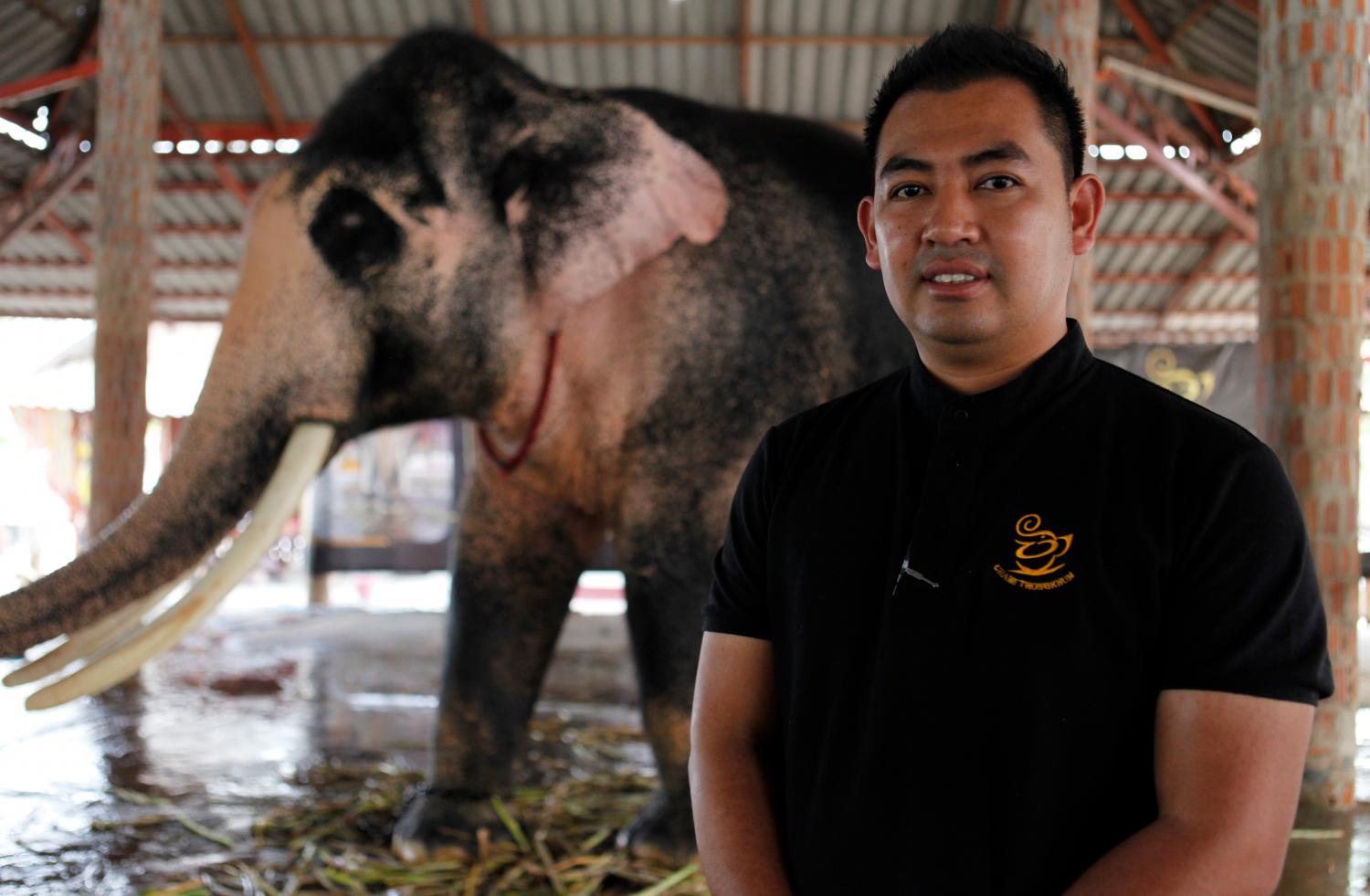 The elephant conservation centre is located in Wapi Pathum district, about 60km south of Muang Maha Sarakham and about 450km northeast of Bangkok. Surrounded with rice fields, the centre was originally founded as a monastery on a 3 rai plot of inherited land from Khruba Thammunee before expanding to 30 rai.

The elephant conservation work started in 2008 when one of the monk's followers asked him to help buy a male elephant that was old but still forced to work. Starting from one elephant -- that is now 90 years old -- the centre currently hosts 14 male elephants.

"We chose to help male elephants first because they have a high chance of death through hard work or getting killed because of their high aggressiveness when they are in musth," he said.

Among the old and young elephants residing in the centre, one killed two tourists in Pattaya, while another killed its mahout. Another elephant at the centre may fit the auspicious characteristic of chang niam, including having dark skin and black toenails with its tusks in the shape of a banana blossom. So far, it has not been certified by experts.

Each elephant looks healthy and happy as their tails swing while inside their pen. Tourists can roam around the centre and take pictures of the elephants, except the white elephant.

"Plai Ekachai is very special. We do not allow people to take photos nor touch him," said Vichian Prathumdee, 44, who has taken care of the elephant for three years.

Visitors can visit him and stay behind a fence. Staff at the centre will take photos of visitors with Plai Ekachai for a fee. 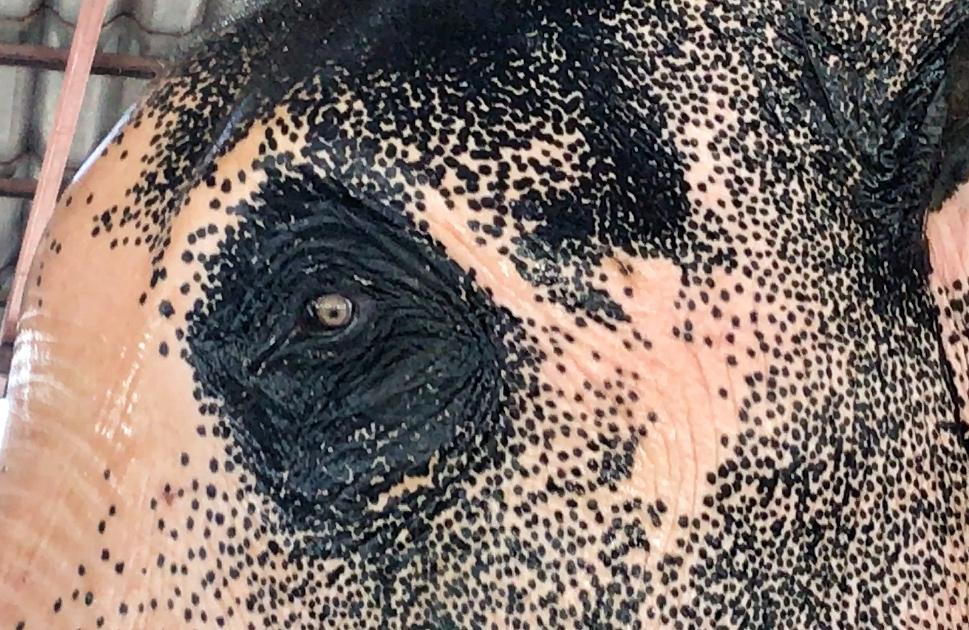 "Plai Ekachai has a good manner, kind and quite sensitive," said Vichian, who calls the elephant than, meaning sir, to show his respect.

He also offers a wai to the elephant before approaching him with food or to ride him around the centre for morning exercise or after the centre closes at 4pm.

"He understands what I say. The way to train him is to tell him what to do, he will do it. There is no need to force him," he said.

The elephant also eats much more than others. He eats around 500kg a day. Most of his food is Napier grass and bananas by the bunch. He sometimes eats coffee cherries, which are consequently processed into elephant dung coffee, available under the Chang Thongkhum brand.

The idea to let the elephants in the centre eat ripe Arabica coffee cherries started around the end of 2014 as elephant dung coffee was already well known as the most expensive coffee, but had limited production in Chiang Rai and Chiang Mai.

The man who makes the business a success is Thanabadee, the CEO of the Chang Thongkhum company. Born in Songkhla, he visited the monastery of Khruba Thammunee in 2010. After learning about the monk's idea to help captive elephants, he regularly donated part of his income from his construction business to the conservation centre.

"Our goal is to raise the elephants to the best of our abilities," he said. The centre does not host elephant shows and opens to the public without an entrance fee. The only source of income at that time was donations. To find regular income, the centre needed to have a business.

He registered the company, naming it Chang Thongkhum (Golden Elephant). He decided the logo, packaging, marketing and even constructed a coffee shop in the elephant conservation centre by himself.

From a bank account that was in the red and almost losing the land for the centre to a loan shark a few years ago, the company's assets are now about 400 million baht. The centre can produce 15 tonnes of elephant dung coffee and 200 tonnes of Arabica coffee beans a year. It exports the elephant dung coffee to several countries including China, Taiwan and Singapore.

"Since we have Plai Ekachai, many good things have happened to us. I never thought that we would come this far," he said.

No one knows when or where a ceremony to celebrate Plai Ekachai as a royal white elephant of King Rama X will take place. Meanwhile, Thanabadee and his staff try their best to raise the elephant and provide opportunities for people to see Plai Ekachai -- just not too close. 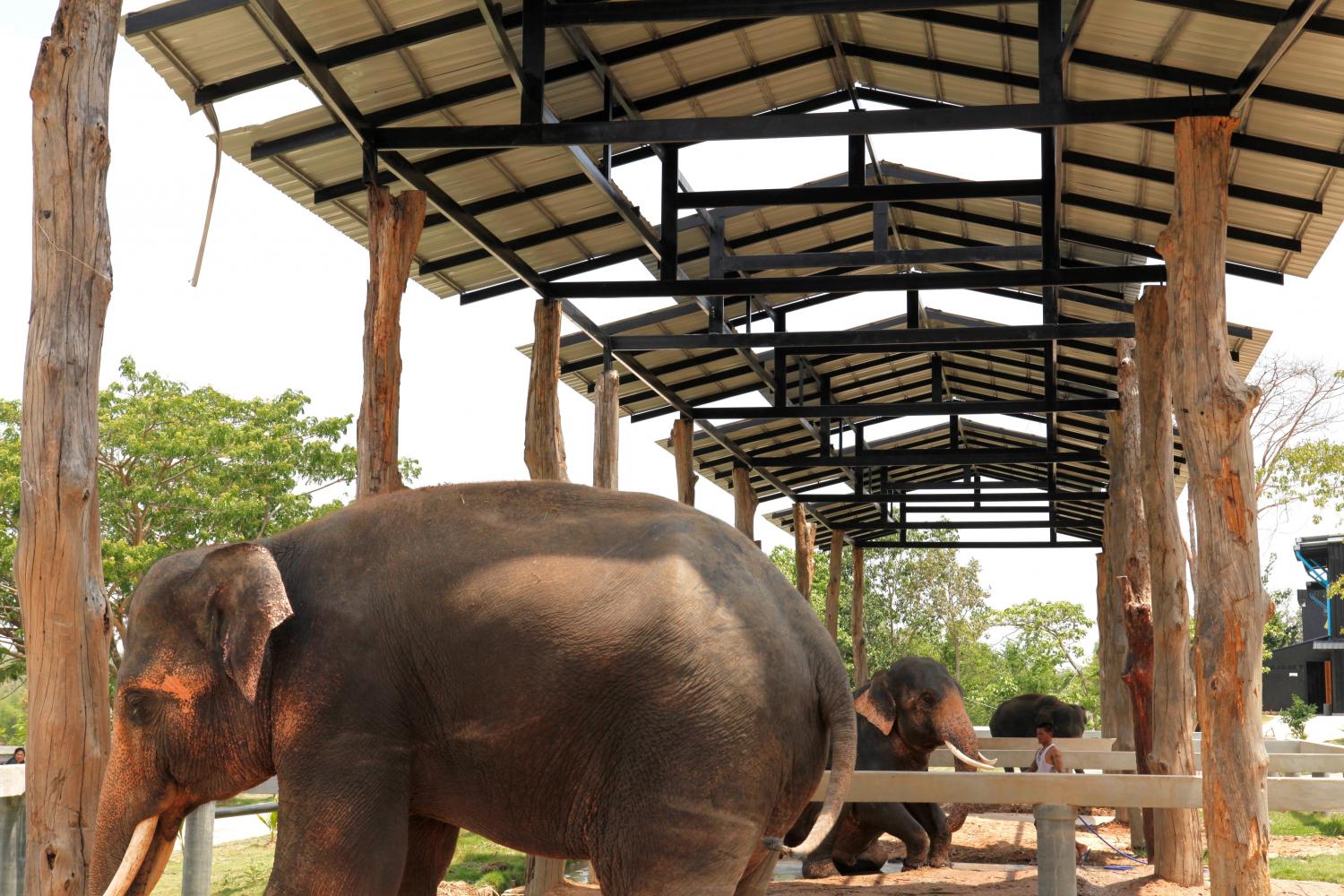 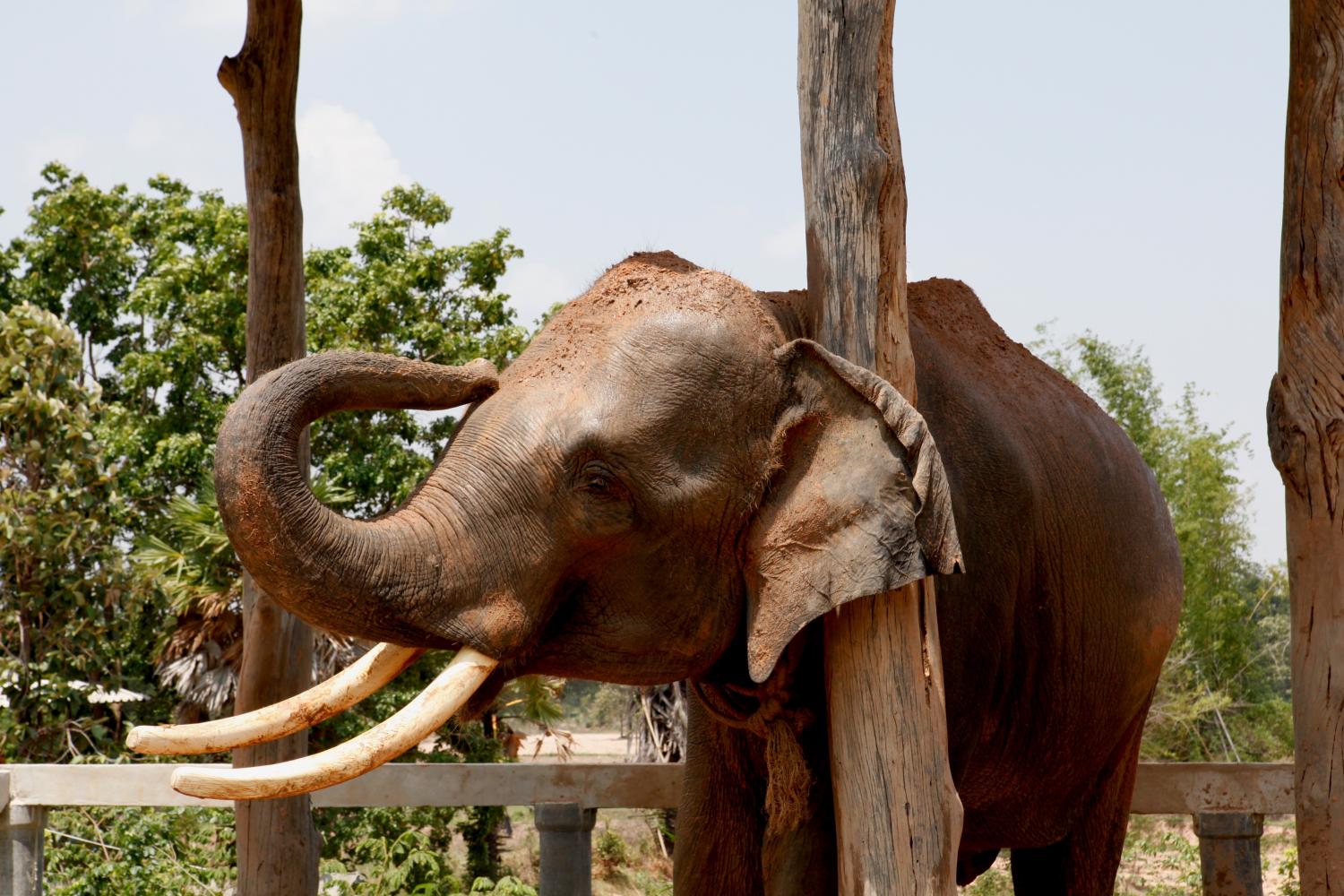 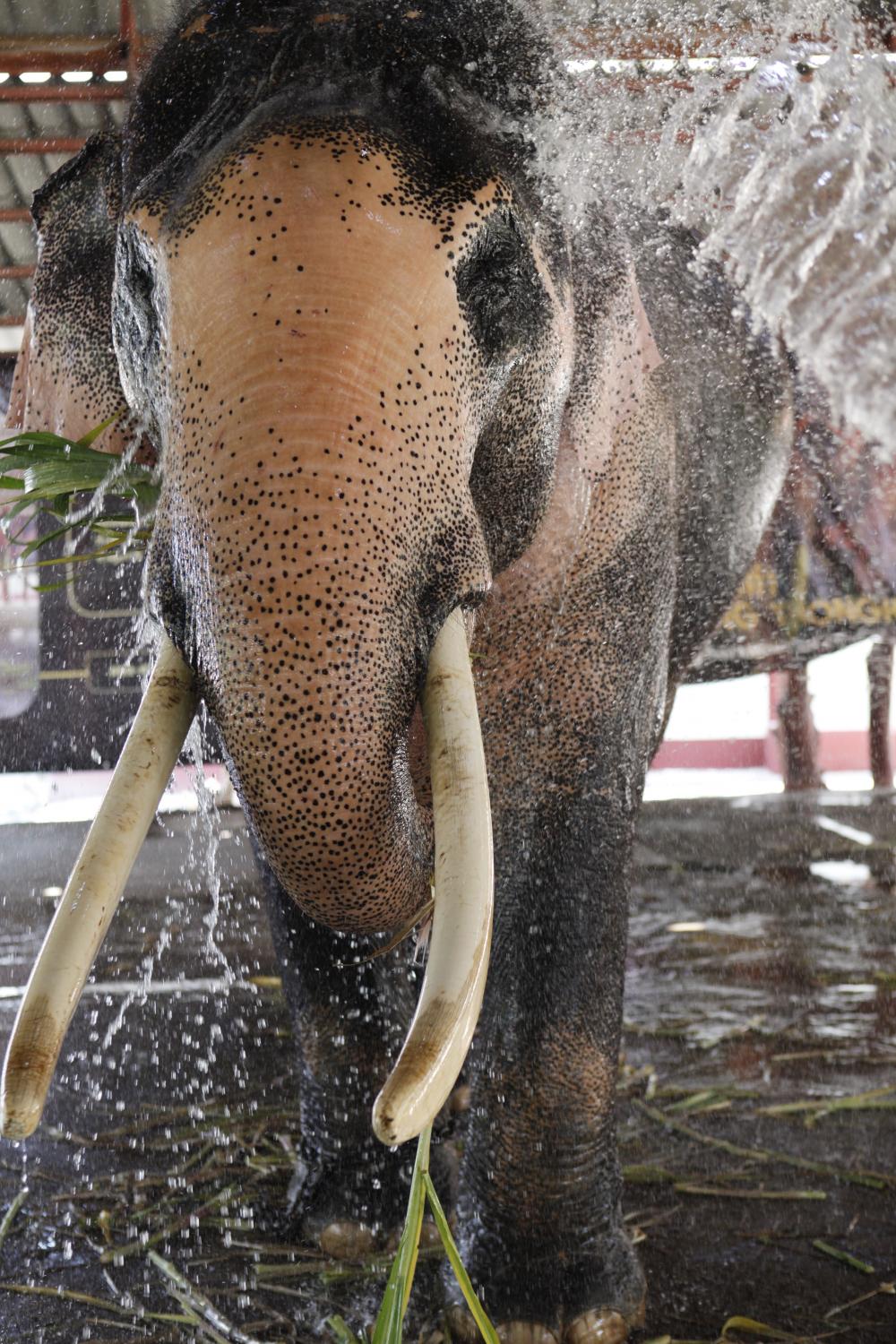 The skin of Plai Ekachai is not totally dark grey and after bathing him more white spots are revealed. Karnjana Karnjanatawe